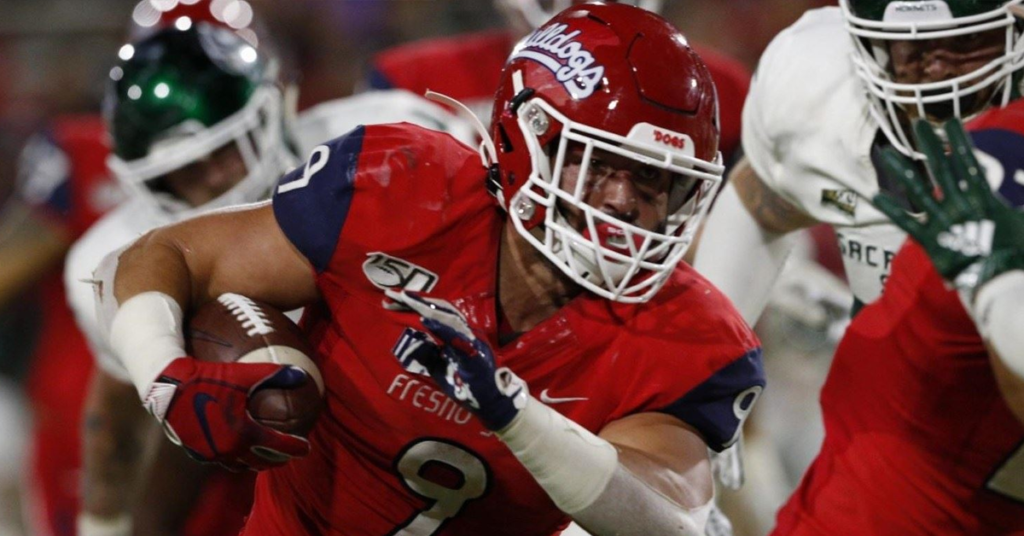 In the first half against Air Force last week, the Fresno State offense played it’s best football all season. It was as perfect as any team hopes to be. The Bulldogs scored on all four drives in the first half (three touchdowns and one field goal).

Quarterback Jorge Reyna led the charge with his consistent play, showing what the offense is capable at it’s best. Reyna completed his first 13 pass attempts and finished the half 17 of 18 for 180 yards and 2 touchdowns.

“It’s the best I’ve seen him play,” offensive coordinator Ryan Grubb said. “We’ve known that the offense in general is capable of that, so you’ve got to build on that.”

But the second half didn’t follow suit as the ‘Dogs failed to put up any points.

“Even if we sustained one drive – you don’t know how much that can change a football game if we can just piece one drive together,” Grubb said. “There’s a few critical errors that were just misses honestly in the second half.”

Grubb posed a question to the offense on Sunday: “How do we do it week in and week out?”

It’s not about just focusing on putting a complete game together, Grubb said, but about finding that consistency and reaching that level every day in practice.

Reyna said the performance in the first half is an example of what the offense is capable as a collective whole when everyone is firing on all cylinders. But the struggles later in the game showed the need for consistency, and it’s not easy to reach that level on a regular basis.

“It’s difficult, especially as college athletes,” Reyna said. However, that’s not an excuse for us. We need to understand, appreciate that we need to be detailed and focus on every play even on the practice field and in the game. We’re still establishing that culture.”

Finding that level of consistency is a priority ahead of facing a UNLV team that just handily-defeated Vanderbilt on the road. Because of the Friday game, the ‘Dogs face a short week of practice, and the practices they do have a shorter schedule than normal.

So the offense has adjusted this week, Grubb said, and is able to fit in the exact same number of plays by jumping straight into a scout look on the team.

UNLV’s defensive coordinator is Tim Skipper. He played linebacker for the Bulldogs from 1997-2000 and coached in various capacities at Fresno State from 2006-2011.

“Our guys don’t ever take anybody for granted, so I don’t think that they think, ‘Oh these guys, that was a fluke.’ They know we need to win this football game, and they’re going to have to bring their best to do it. So we’ll be ready for that.”

Reyna called UNLV’s defensive coaches “phenomenal,” and he can’t wait to go up against another competitive team in Bulldog Stadium. This matchup brings a little something extra to the table too.

In 2017, the last time the Rebels played in Bulldog Stadium, they handed the Bulldogs a 26-16 loss. Even though Reyna wasn’t the starter that season, it’s a little personal for him.