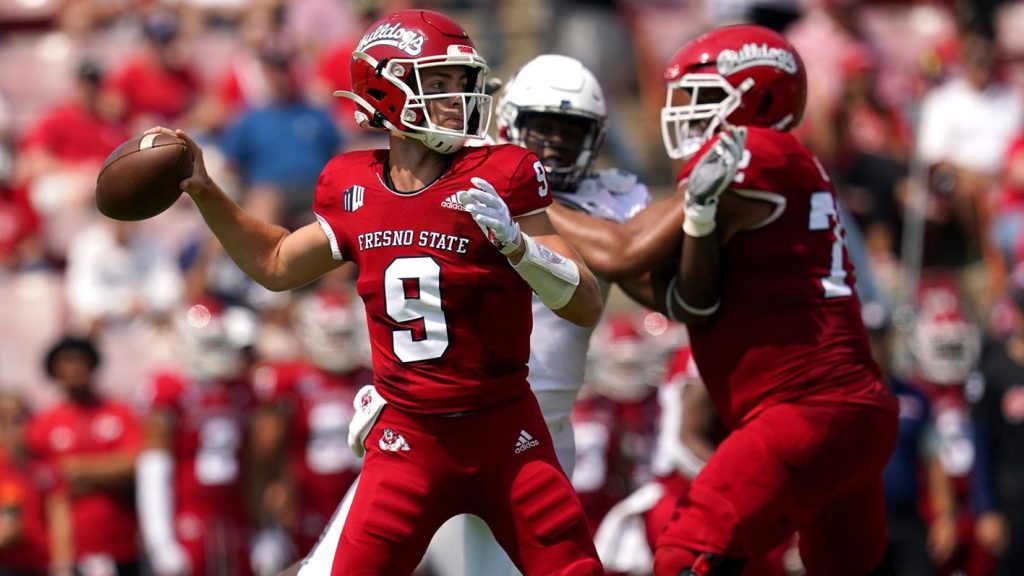 If it weren’t for three costly turnovers, Fresno State would have waltzed their way out of Autzen Stadium on Saturday having conquered Oregon, the 11th ranked team in the nation, with a fairly dominant performance.

But that didn’t come to be as the turnover bug bit hard in the game’s first eight minutes and reared its ugly head once again in the fourth quarter, proving to be too much to overcome for the ‘Dogs in the 31-24 loss.

First up was a strip sack by Oregon pass rusher Kayvon Thibodeaux – who is expected to be a top NFL draft pick – on Fresno State quarterback Jake Haener. Oregon recovered the ball, took it to the Fresno State three-yard line and scored a touchdown on the ensuing possession.

When Fresno State got the ball back, running back Ronnie Rivers fumbled on the first play, giving the Ducks great field position once again and leading to an early 14-0 hole.

After the slow start, the Bulldogs battled back and proved to be the better team for the vast majority of the afternoon, taking a 24-21 lead in the fourth quarter largely on the back of Haener, who completed nearly 70 percent of his passes and threw for 298 yards and 1 touchdown.

At that point, Fresno State looked like a team ready to make a statement and draw the nation’s attention as the best mid-major vying for a spot in a New Year’s Six bowl.

Instead, the spotlight seemed to be too big for the ‘Dogs, especially on two crucial plays in the last stretch of the game: another Haener fumble and a defensive breakdown to allow a touchdown by Oregon quarterback Anthony Brown.

With just over 10 minutes remaining, Haener scrambled on a second-and-10 and dove – choosing not to slide – to gain a few extra yards and move the chains. That choice to dive proved costly, as the ball was knocked loose and Oregon recovered in Fresno State territory.

“That second fumble at the end of the game that he had, that was disappointing – going down, just got to take care of the football,” said Fresno State Head Coach Kalen DeBoer. “But beyond that he kept his cool the entire game.”

Not all was lost, however. The Ducks only grabbed a field goal, which tied the game at 24, giving Fresno State another opportunity to drive down the field and make a statement.

Instead the ‘Dogs went three-and-out and were forced to punt.

Oregon responded on offense with five plays for 33 yards before Brown split the Bulldogs for a 30-yard touchdown run on fourth down. Brown’s touchdown was Oregon’s longest rush of the game and the second-longest play overall.

“We just didn’t execute,” said Bulldogs linebacker Tyson Maeva. “Our eyes were wrong, and when the guys were there to make the play they just didn’t make it happen – missed tackles and what not. But there should’ve been a lot more guys there in the first place, including me.”

Overall the score doesn’t reflect the performance by Fresno State’s defense. Outside of Brown’s big play, the ‘Dogs were solid all afternoon, often playing more physical than the more highly-recruited Ducks.

“Really it’s just a couple explosive plays that we gave up, and that’s probably what I’m most excited about, is No. 1 the physicality we played with, and No. 2 the lack of explosive plays,” DeBoer said.

“They got the one down the sideline when the quarterback had a little extra time in the first half, and then the quarterback run on fourth down at the end. Otherwise, I thought we just continued to line up and play ball. We never looked overwhelmed. We were lined up right. There’s always little things we’re going to get critical about, but we played physical. We made [Oregon] earn a lot of first downs.”

Despite the strong defensive effort, the slow start to the game was crippling. Why did the Bulldogs come out so flat?

Maeva, who is also a team captain, pointed to last week’s 45-0 blowout win over UConn to open the season, saying the team was simply overconfident.

“I think we were kind of just riding our high horse from last week, stomping on UConn and a goose egg on them,” Maeva said. “I think we kind of came out just expecting the same thing to happen without actually putting the work in. Once we got our teeth kicked in it woke us up. After that we were playing pretty good defense until the end, but not good enough overall.”

Overconfidence or not, the dreams of Fresno State finally putting together an undefeated season have been dashed.

But the ‘Dogs still have their eyes set on a Mountain West title, something that – given their effort Saturday – should be within reach.

“I would say the best word would be that we’re hurting right now. We’re not down. When I walked out of the locker room, there are guys that are, in a good way, fired up. They want to step back on the football field right now, and they want to fix the mistakes,” DeBoer said.

“We’ve got a team of guys that really care. They really care, and I think our maturity just even throughout the course of the game, but in the locker room afterwards, really shows out. I am extremely confident that tomorrow is going to be one of the greatest film sessions we’re going to have, and Tuesday, Wednesday, Thursday is going to be an amazing week of practice, just because of the response.”