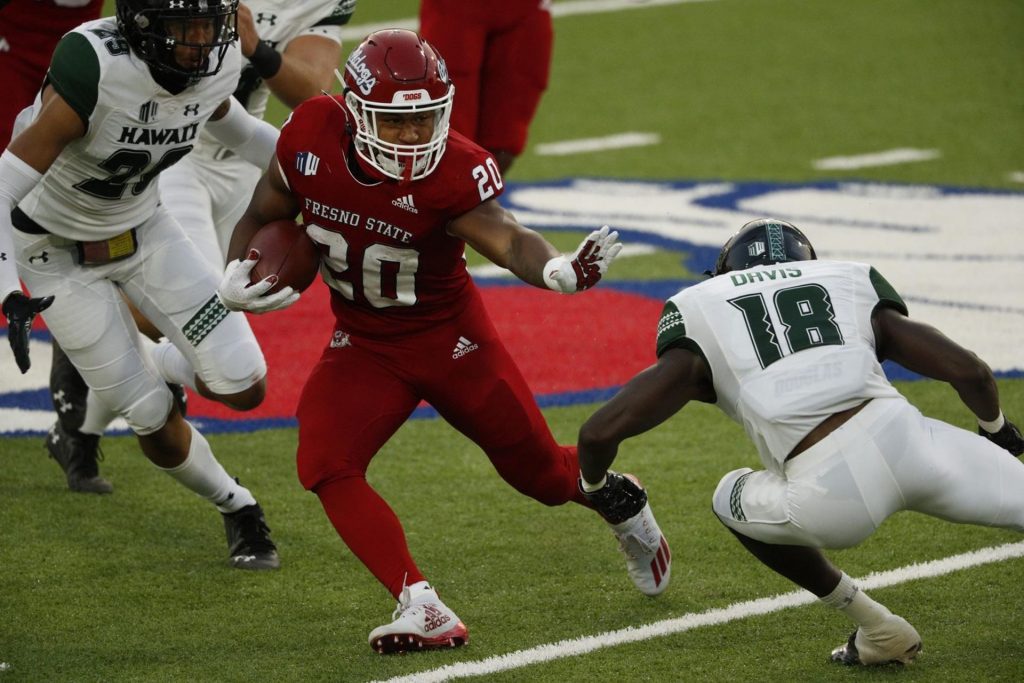 Under the scorching sun on Saturday, with temperatures reaching as high as 154 degrees on Bulldog Stadium’s turf, Jake Haener, Ronnie Rivers, and Kalen DeBoer delivered their own heat on the scoreboard.

En route to a dominant 45-0 shutout of the Huskies of Connecticut, Ronnie Rivers broke the program record for career touchdowns, knocking off running back Anthony Daigle whose record 44 touchdowns were untouched for nearly 30 years.

Rivers tied the record at the close of the shortened pandemic season last year.

Rivers planted his flag in Fresno State’s record book early in the action on Saturday, hauling in a pass 15 yards deep from Haener and turning on the afterburners for another 45 yards.

To add a cherry on top for the Rivers family on an historic day, Fresno State tendered an offer to Rivers’ brother – Devon, a Brentwood Heritage High junior – to join the program as a running back.

If he opted to go to Fresno State, Devon would be the third child of Fresno State standout Ron Rivers to make the plunge with the Bulldogs. Rivers’ daughter Malia starred on Fresno State’s softball team from 2014 through 2017.

The nonconference matchup with UConn proved to be valuable highlight reel material, capped with a masterstroke 86-yard catch and run from Jalen Cropper that carved up the Huskies defense.

HE'S GONNA GO!! An 86-yard throw and catch and @FresnoStateFB tacks on another. pic.twitter.com/7FaN5kihhz

Up 31-0 on UConn, Haener suffered a non-contact injury that appeared to be affecting his knee. Postgame, he clarified it was a full-body cramp that likely won’t affect him much moving forward.

“I feel great,” the quarterback said after the game. “I just had a full-body cramp. At halftime, I was more gassed than I usually am.”

Redshirt freshman quarterback Logan Fife stepped in to helm the remainder of the game. The youngster completed seven of 13 attempts, threw one pick and a touchdown in the second half of the game.

DeBoer celebrated the win, but noted there are plenty of things to tune up ahead of bigger dates with Oregon and UCLA on the calendar.

“It’s not perfect and I don’t know if I’ve ever seen a perfect game played. But there was a lot of great things that I could see we are better at,” DeBoer said to kick off his postgame press conference. “Of course there’s things we’re going to need to continue to improve. But seeing the defense using the energy coming out of the locker room to start the game and feeding off of that – we were probably a little over-the-top excited coming down the ramp and in the locker room beforehand. The defense used that but it took a little bit for the offense to settle in and get our bearings right and get back to what we normally do.”

Fresno State hits the road for Eugene, Ore. next Saturday for a second-straight 11 a.m. kickoff, this time squaring off against the Oregon Ducks.