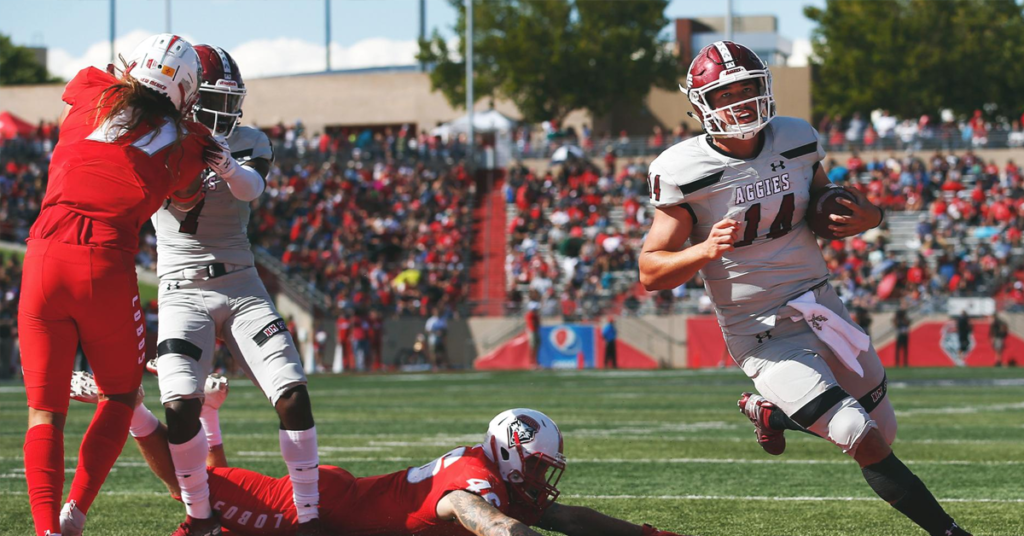 They were blown out by Washington State and No. 2 Alabama to start the season, followed by a 31-10 loss to San Diego State.

Week 4 flipped the script a little against rival New Mexico, but the Aggies ended up on the losing end again, 55-52.

So New Mexico State’s in a tough position and is an opponent whose quality is more like Sacramento State than both USC and Minnesota.

The Aggies are currently an independent after being dropped from the Sun Belt following the 2017 season. They were previously part of the WAC from 2005 to 2012 and used to play Fresno State regularly.

“They’ve played a very difficult schedule so far,” Fresno State head coach Jeff Tedford said. “But they showed last week that they can put up a lot of points.”

And that’s exactly what the challenge will be for Fresno State on Saturday.

The Aggies’ offense hit its stride against New Mexico and proved to be more than capable of presenting a challenge for the Bulldogs.

Running back Jason Huntley struggled out the gate for the first three weeks, but he had a breakout performance last week rushing for 114 yards and a touchdown on only 12 carries. Tedford described him as a shifty back able to make plays in space.

The major weakness on offense comes at both offensive tackle positions, where they’ve been ravaged with injuries, which has affected the offensive line as a whole.

On the other side of the ball, the defensive unit has collectively struggled.

The defense only has one sack on the season and hasn’t forced any fumbles.

The lone bright spot is defensive back Austin Perkins, who’s responsible for the only two turnovers – both interceptions – for the defense.

New Mexico State head coach Doug Martin has been in charge since 2013 and has a 20-57 record with the Aggies. He previously was the head coach at Kent State from 2004-2010.

In 2017, Martin led the Aggies to a 7-6 record and their first bowl appearance in 57 years, a win against Utah State in the Arizona Bowl.

“Fresno really should be a 3-0 football team right now,” Martin said. “They had a one-score game with USC late in the fourth quarter. Minnesota was lucky to beat them… I think Fresno’s the best team we have played other than Alabama.”

He said that he thinks the Bulldogs have more talent than Washington State and have the best group of linebackers he’s seen all season.