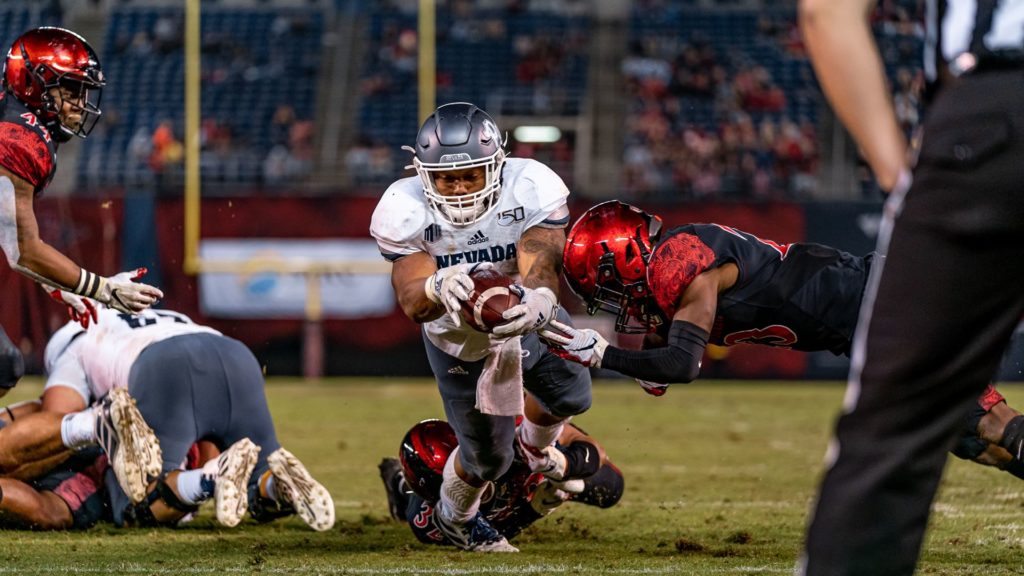 Somehow, someway, Nevada has found its way to a winning record this season. The Wolfpack (6-4) head into Bulldog Stadium at the tail end of an up and down year, but they’ve ultimately had the better season and have beaten better opponents than Fresno State has.

The Wolfapck started off strong beating Purdue 34-31 on a last second field goal, but they suffered a 77-6 defeat at the hands of Oregon the following week.

Their other three losses – to Hawaii, Utah State and Wyoming – have all been blowouts. The Wolfpack have lost by an average of 44 points per game. In their six hard-fought wins, they won by an average of a single touchdown.

The hardest – and most impressive – win came two weeks ago. Nevada beat San Diego State 17-13 on the road, something Fresno State couldn’t accomplish the following week.

Coming off their big division win, the Wolfpack had a bye week to put in extra preparation for Fresno State.

Even though they suffered blowout losses earlier in the season, the Wolfpack are trending in the right direction, something that can’t be said about Fresno State.

Nevada’s offense is dismal, even though the unit is performing well enough to win. The Wolfpack rank last in scoring and 11th in total offense in the Mountain West. . The unit is not all that different from San Diego State, at least statistically. However, Nevada has a much better passing attack than the Aztecs do, ranking sixth in the conference.

Quarterback Carson Strong started off the year with a nearly flawless performance against Purdue, but his play fell off as he dealt with some injuries and simply wasn’t playing well. But he’s heated up the last three games, throwing 3 touchdowns, 2 interceptions and averaging 233 yards per game.

Running back Toa Taua leads the team with 581 yards and five touchdowns. He’s only averaging 3.75 yards per carry, and no other rusher has over 200 yards.

The Wolfpack have two top receivers, Romeo Doubs and Elijah Cooks, and a few other contributors who rotate in and out. Cooks leads with 6 touchdowns while Doubs is the big play threat averaging over 16 yards per reception.

Senior defensive back Daniel Brown leads the unit with 4 interceptions, and defensive end Dom Peterson leads with 11 tackles for loss and 6 sacks.

Head coach Jay Norvell is in his third year in charge of Nevada. He improved from 3-9 in his first year to 8-5 in 2017, and he has a chance to take the Wolfpack to 9 wins this season.

Last season Fresno State won the annual matchup 21-3, and the Bulldogs own the all-time record 29-20-1. Fresno State is 5-2 against Nevada since both schools joined the Mountain West in 2012.

Even though Nevada is trending up and Fresno State down, Las Vegas doesn’t seem to care: The Bulldogs are 13.5-point favorites.