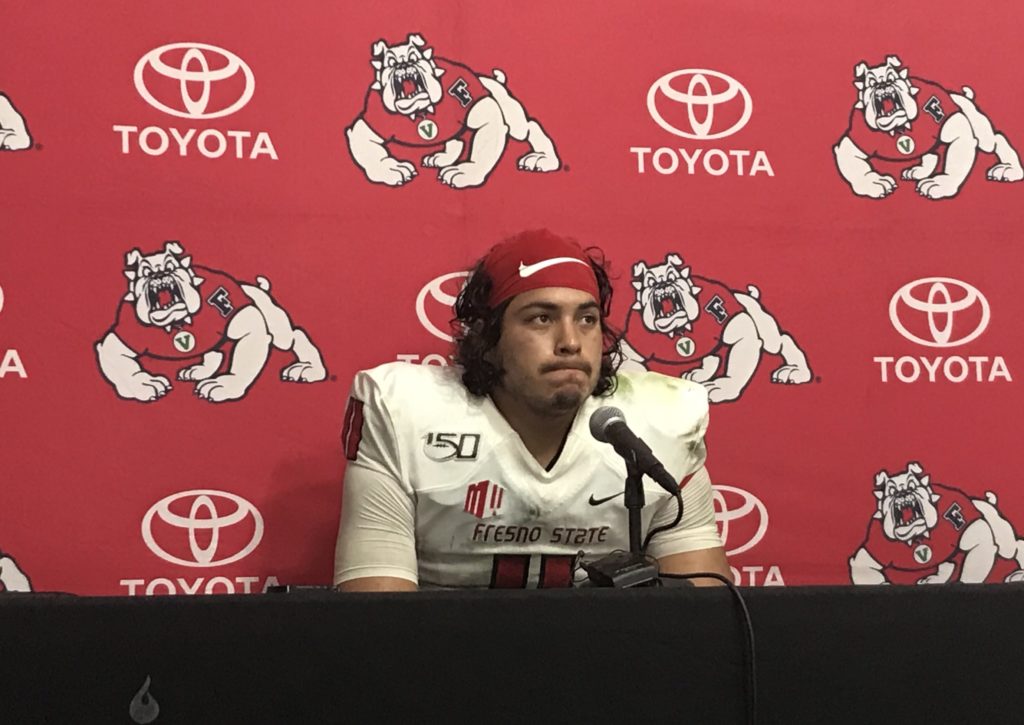 Despite an injury to USC’s quarterback and the momentum heading into halftime, Fresno State couldn’t put it together against the Trojans, losing 31-23.

“We came here to win a football game and didn’t get it done,” Fresno State head coach Jeff Tedford said following the matchup. “Proud of the team for the way they competed. Fought hard to the very end, but at the end of the day it’s all about winning the game, and we didn’t get that done. A lot of great learning experiences for us.”

As halftime approached, it seemed that Fresno State had everything going for it – USC quarterback J.T. Daniels coughed up the ball as he got injured from a Justin Rice sack, the defense had stepped up in the second quarter and Fresno State quarterback Jorge Reyna  looked like he was a little more comfortable in his first start.

It all went downhill in the third quarter. After making a field goal to bring the score to 17-13, the Trojans returned the kickoff 101 yards for a touchdown, which knocked the Bulldogs into a hole they were ultimately unable to climb out of.

“The kickoff return was a big play, for sure because we had a little momentum going there,” Tedford said. “We let him get loose. Again, they made a big play, and we didn’t execute very well.”

The ‘Dogs pushed the rushing attack with running back Ronnie Rivers in the third quarter. While Rivers was successful, the ‘Dogs only scored on a field goal in the third, losing all the momentum they built before halftime.

Reyna made a late, wild push in waning moments of the game.

With under three minutes left, USC was stuffed by Mykal Walker on a fourth-and-one conversion attempt at midfield.

Reyna then threw three straight incompletions to bring up fourth and 10. Then, Reyna tossed a 36-yard completion to wide receiver Chris Coleman to put the Bulldogs at the 15 yard line.

But the luck didn’t last.

Reyna tried to hit Rivers in the end zone on the next play, but was intercepted, dashing Fresno State’s hopes for a comeback in heartbreaking fashion.

Tedford said they ran a fake wide screen, and USC reacted just how he wanted them to. But the Trojans capitalized on Reyna not throwing the ball with enough velocity, giving the safety enough time to make the play.

Reyna finished the game with 256 yards through the air and two touchdowns. He excelled as a dual threat option, rushing for 109 yards on 20 attempts.

“A lot of mistakes,” Reyna said. “I had a lot of opportunities. Just go back to the film and reevaluate everything.”

Before he was injured, Daniels gave the Bulldogs fits. He completed 10 of 11 passes on the first drive en route to an eight-yard touchdown pass. The second drive was the same story, putting the Bulldogs in an early 14-0 hole.

Rice said the defense was well prepared for USC’s speed, but it took them a while to settle in.

“We let the emotions get the best of us in the beginning,” Rice said. “Once we settled in, I felt like we found our groove.”

USC freshman quarterback Kedon Slovis stepped in after Daniels’ injury. While he didn’t light the Bulldogs on fire, he made just enough plays to win the game for the Trojans. He completed six out of eight passes, including a 41 yard pass that put the Trojans in scoring position.

“I told the kids to hold their heads high,” Tedford said. “They competed well against a great football team. We’ll go back to the drawing board and we’ll learn. I have a lot of confidence in this group.”