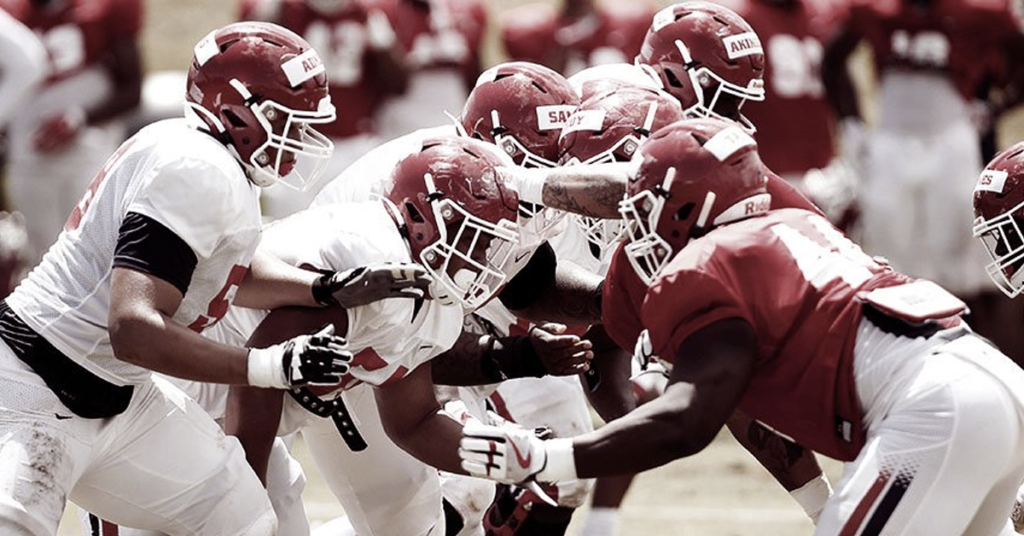 The Bulldogs practiced in full pads for the first time in fall camp Wednesday in the team’s fifth practice.

Fresno State opened fall camp last Friday and held the first two practices in only helmets before adding shoulder pads for the third and fourth practices.

Defensive coordinator Bert Watts talked about the importance of being able to practice proper tackling techniques in game situations.

“We got a chance to go live in a couple periods and play real football, which is nice because we do tackling drills all year round really now, trying to make sure we’re doing it the right way and the safe way,” Watts said. “These lessons that we learn on days like this are invaluable, to be able to actually get out there and do it and be in those live situations.

Watts said while each practice doesn’t increase in intensity on an incremental level, the players build mental toughness each and every day.

“I think it gets intense mentally, more than anything,” Watts said. “I think our guys bring good energy every day, but as installs pile on each other, and fatigue sets in, soreness sets in – guys start to get irritable a little bit.

“And then maybe if they’re not getting something that we’re teaching and installing, that’s when it can get a little bit more tense out here. So it’s important we keep our composure and just trust the process and keep working.”

Senior linebacker Mykal Walker was excited to get the first practice in with full pads, and he also commented on the team’s intensity.

“It felt great,” Walker said. “These guys are flying around. I’ve got to tip my hat off to them. It’s hot outside, but these guys are excited. They bring the energy every day, and it just forces me to keep my energy up too. We love it. We’re having a good time out here.

“We like to keep every day the same, try to keep the intensity up. But obviously some guys – it starts wearing them down a little bit. So we have those core group of guys who they’ll just pick everybody up. I’ve got my guys who pick me up, and I pick up my guys too. Out here it’s a family atmosphere. We call each other brothers out here, so we act like it.”

The ‘Dogs practice in full pads again Thursday before returning to a lighter load Friday with just helmets. The first fall scrimmage is scheduled for Saturday.

An update on Fresno State’s first opponent of the season: Freshman cornerback Chris Steele is eligible to play for USC immediately.

The NCAA granted him his request to play after transferring from Florida. He enrolled at Florida in the spring of 2019, but decided to transfer to USC in the fall.

Steele will compete for a starting spot. Only two cornerbacks return to the Trojans with game experience.