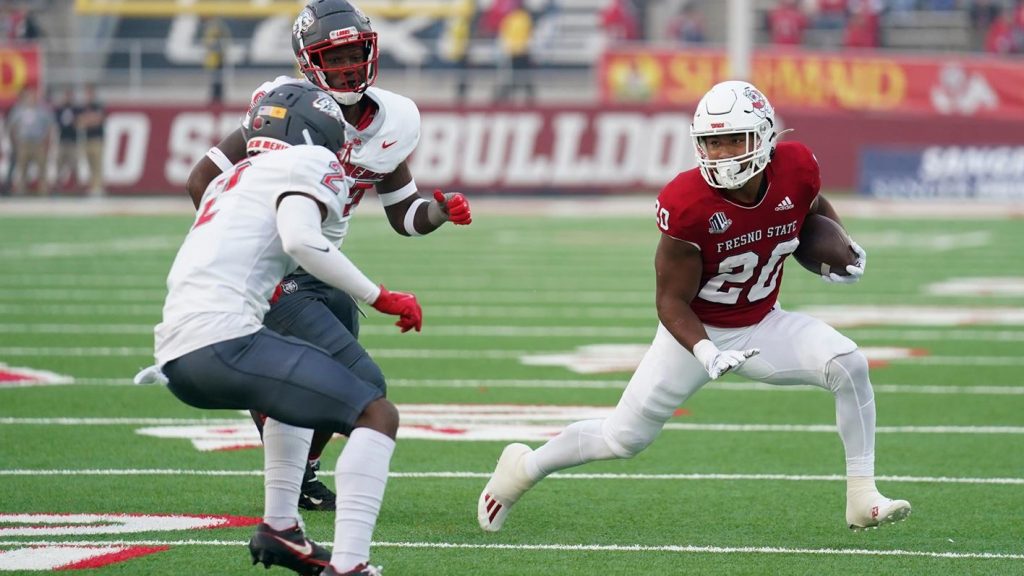 As Fresno State’s 17 seniors took the field at Bulldog Stadium for the final time in their careers, the Bulldogs sent them off with a dominant 34-7 win over New Mexico.

Fresno State’s dominance was clear from the start. So clear, in fact, that the Bulldogs did something they had yet to do all season – score on their first possession of the game.

The Lobos received the opening kickoff, but on the second play of the game cornerback Cale Sanders Jr. picked off New Mexico quarterback Isaiah Chavez, giving the Bulldogs possession at the New Mexico 31-yard line.

Fresno State promptly capitalized, highlighted by running back Ronnie Rivers taking a direct snap to the right side of the end zone to give the ‘Dogs the early 7-0 lead.

That fast start was largely a response to the poor play from last week’s 40-14 blowout loss to Boise State, head coach Kalen DeBoer said after the game.

DeBoer noted the intensity the players had when they first took the practice field last Tuesday, which carried throughout the week.

“That’s why I think we came out strong and played well right off the bat, because New Mexico does enough stuff on both sides of the ball that are a pain in the butt. I’ll just put it that way, because they run that option and you’ve got to be disciplined, and we were disciplined,” DeBoer said.

Although the ‘Dogs were forced to punt on their second possession, they strung together five-straight scoring drives as they mostly had their way with New Mexico’s defense.

That early run came largely on the back of a consistent rush attack led by Rivers and sharp play by quarterback Jake Haener, who only had 3 incompletions in the first half.

Haener played like he did early in the season as he completed 24 of 31 pass attempts for 300 yards and 3 touchdowns.

Rivers ended his last game in Bulldog Stadium with 71 rushing yards and 1 touchdown, as well as adding 5 yards in the receiving game.

As DeBoer noted, New Mexico’s option-based run-first attack posed a challenge for the defense. But the ‘Dogs only blew their assignments a few times all night, holding the Lobos to only 7 first downs and 196 yards of total offense.

New Mexico’s only points came in the third quarter. The Bulldogs opened the second half with a field goal, and the Lobos started the ensuing possession at their own 26-yard line.

The Lobos racked up 8-straight rushes to break into Fresno State territory but were faced with a 4th and 2. They went for it, but Fresno State cornerback DaRon Bland came down with the interception that brought short-lived relief to the Bulldogs’ sideline.

The interception was called back as the ‘Dogs committed a roughing the passer penalty, giving New Mexico the ball back and a fresh set of downs. The Lobos found the end zone two plays later, but if it wasn’t for the penalty, the Bulldogs likely would have pitched another shutout.

Ultimately it turned out to be a drama-free, easy win for the Bulldogs, giving the senior class one last chance to give it their all in Bulldog Stadium.

“They’re a special group. I love the energy, I love the vibe I was getting, especially the second half of the week, from Tuesday, Wednesday, Thursday, Friday. I thought our program, the vibe and just the excitement, it was special,” DeBoer said.

“Probably the only thing I was concerned about was the emotions I saw from the seniors when they were getting introduced and coming down the framp. I can see how important this place is to them. I know that, I know that’s the type of guys we have on this football team.”

Rivers was chief among the standout seniors, receiving the largest applause from Bulldog fans during the pregame introductions.

Fresno State’s all-time leading touchdown scorer even took a bow after he scored his last one in Bulldog Stadium to cap off a storied career.

“I had that one planned out a little bit,” Rivers said. “Just to do that celebration and thank all the fans, everybody that has shown support over these past five years, just to give back to them and show them that I appreciate them.”

Sitting in third place all-time in program history with 3,352 rushing yards, Rivers has an opportunity to pass his father, Ron Rivers, and move into second place as the season wraps up, just needing 121 more yards on the ground.

“I think I made my mark coming here,” Rivers said. “I didn’t want to live in my dad’s shadow, so just being able to create a name for myself is something I took pride in.”