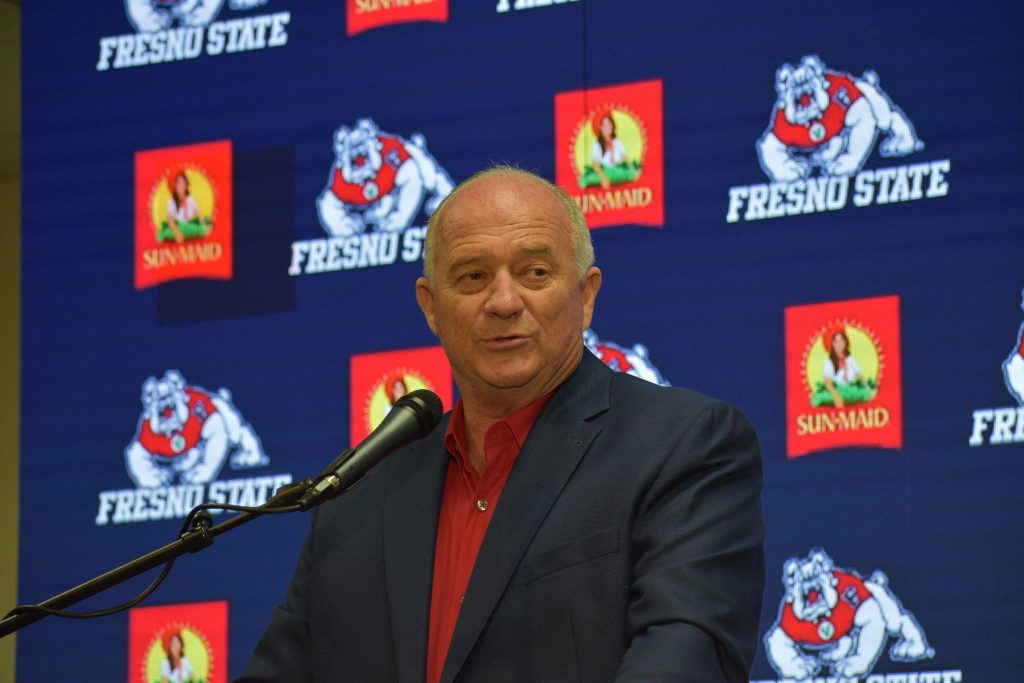 Just like Tedford, the new coaching staff brings that popular Fresno State experience to the table.

Fresno State revealed most of Tedford’s coaching staff on Thursday, which includes seven assistants who have previous ties to the university.

With nine coaches announced, Tedford just has to find an offensive line coach to round out the staff.

At his introductory press conference, Tedford noted the desire of many coaches throughout the nation to join his staff.

He didn’t have to go far to start filling out his coaching roster.

Although there was an exodus among the assistants to the Pacific Northwest to follow former Fresno State head coach Kalen DeBoer to Washington, Tedford was able to retain three coaches from last year’s staff, all of whom also worked for Tedford during his first tenure.

“This staff has extensive experience and history here at Fresno State and across the country at the highest level of college football and the NFL,” Tedford said in a statement. “They appreciate the pride and tradition of Bulldog football, the Red Wave, and the Valley. Not only are they excellent coaches and teachers of the game, but they are quality people who will care about our student-athletes on and off the field, and a group who will continue to develop our team into a championship-level program.”

Kirby Moore, Fresno State’s wide receivers coach for the last five seasons, will move up as offensive coordinator, which comes after he filled in as the offensive play caller during the win over UTEP in the New Mexico Bowl last week.

Former offensive line coach Roman Sapolu will slide over to coach the tight ends for the first time in his career.

J.D. Williams is also staying on at Fresno State, returning to his role as defensive backs coach after focusing on the cornerbacks the last two years. Williams was a star cornerback himself for Fresno State in the late 1980s and was selected by the Buffalo Bills in the first round of the 1990 NFL Draft.

In addition to the three coaches staying on, Tedford is also bringing back four former Pat Hill assistants.

John Baxter, the long-time special teams coordinator under Hill, will return to his old position. Baxter coached at Fresno State from 1997-2009 before heading to USC to take over the Trojans’ special teams.

While Baxter was a Bulldog, Fresno State’s special teams routinely ranked as one of the top units in the nation. Fresno State blocked 84 kicks and punts during his tenure, and the special teams unit scored 39 touchdowns.

Baxter’s first tenure was also notable for his off the field achievements. He developed the “Academic Gameplan” program, which helped student-athletes succeed in the classroom and helped Fresno State achieve an APR score nearly 20 points higher than the national average.

Rounding out the coordinators is Kevin Coyle, who will once again take control of Fresno State’s defense. Coyle ran Hill’s defense from 1997-2000 before heading to the NFL as an assistant for 17 years.

Coyle was most recently a defensive analyst with LSU for the past four seasons.

Linebackers coach Tim Skipper returns for his third time at Fresno State. He starred at linebacker under Hill from 1997-2000 and was brought on to coach running backs in 2006, before taking over as linebackers coach from 2009-2011.

The other former Bulldog to return to the Central Valley is defensive line coach Jethro Franklin. He played on Fresno State’s defensive line from 1986-1987 and coached the position group under Jim Sweeney and Hill from 1991-1998.

Franklin has had several stops in the NFL and college football over the last two decades and was most recently the defensive line coach at Missouri.

The other two coaches that were announced Thursday will be heading to Fresno for the first time.

James Montgomery will coach the running backs after coaching the same position in two stops at Sacramento State and Cal Poly since 2014. Montgomery also played running back at Cal under Tedford from 2006-2007.

The only coach to not have any ties to Fresno State or Tedford is Pat McCann, who will oversee the wide receivers.

McCann coached the wide receivers as Eastern Washington for the past three seasons.