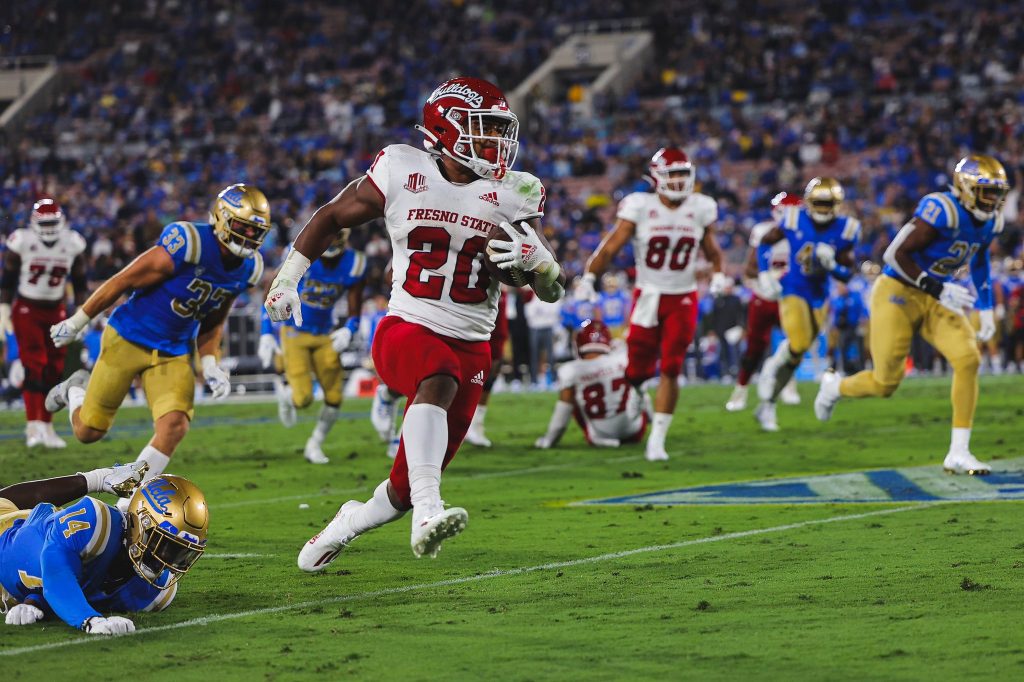 With 54 seconds left on the clock, Fresno State was faced with the challenge of a lifetime: Drive 75 yards down field to find the end zone to overcome a four-point deficit.

There was never any doubt on Fresno State’s sideline that the Bulldogs would do just that, even after the No. 13 UCLA Bruins silenced the Red Wave contingent that took the trip down Highway 99 with a 75 yard drive of their own that only took 2:01 to take a 37-33 lead.

Fresno State managed to turn the tide one final time as Haener led the drive of his life: six plays for 75 yards – all through the air – culminating in the game-winning touchdown to wide receiver Jalen Cropper with 14 seconds to spare, giving the Bulldogs a 40-37 victory.

“The heart that this team has is just unbelievable,” running back Ronnie Rivers said after the game. “Not one time during that game did we not feel that we were going to win that game. It’s just an amazing feeling.”

While Rivers’ confidence in the team never wavered, Fresno State struggled to keep up with the Bruins for much of the second half. The Bulldogs jumped out to a 23-10 lead at halftime, but UCLA came out of the locker room with a renewed energy and chipped away at Fresno State’s lead until the Bruins finally overtook the ‘Dogs midway through the fourth quarter.

Fresno State was in rough shape by then. The ‘Dogs only managed one field goal up to that point in the second half and had lost two fumbles in the fourth quarter that led to UCLA touchdowns.

Down 30-26 with 7:27 left in the game, Fresno State’s offense came alive, largely on the back of Haener, to go 75 yards and take a 33-30 lead. On a 3rd-and-goal from the 19 yard line following two penalties, Haener hit wide receiver Erik Brooks in the right-front corner of the end zone for a touchdown. As Brooks scored, Haener was lying on his back on the ground, clearly in pain.

But he got up and managed to deliver yet again in the final minute as the pressure was at its peak.

“We know he’s tough. We’ve seen that over the course of last year to this year. He’s tough, and he got better when the pressure was greater. I really feel that, and there were some things I know he wants back as the game was going on, just things that you don’t even really know and see from a fan standpoint,” Fresno State Head Coach Kalen DeBoer said.

“But when the pressure was great, he was at his best. That’s what’s awesome, and that’s just what continues to bring the belief that our team has in him. And that goes both ways – he has a lot of belief in the guys around both on offense and defense.”

With his fourth quarter heroics, Haener had one of the statistically best games of his career: 39-53 (73.5 percent completion rate), 455 passing yards, 2 touchdowns and 1 interception.

UCLA Head Coach Chip Kelly gave Haener the highest praise after his side lost in heartbreaking fashion to the Bulldogs.

“You’ve got to tip your hat to Jake. That is as good of a performance as I’ve seen a quarterback make in my career. I’m not sure if he ever threw a bad ball. He had great command of everything we were doing,” Kelly said. “He did a good job, looking at some of the disguises, the protections, knowing to get the ball off. I saw him after the game just to congratulate him, and he was really banged up. But that is a heck of a competitor and a heck of a football player, so you’ve got to tip your cap to him.”

When asked about the defensive game plan against Haener, Kelly added, “I think we ran everything against Jake Haener. We blitzed him and played cover zero. We rushed three and dropped everybody into coverage. I think we threw the whole kitchen sink at that young man. I think he handled everything. Again, you’ve got to give him credit. We ran everything that was in our defensive repertoire at that guy, and he just continued to make plays.”

An action-filled night at the Rose Bowl

While the final sequence of events dominated the post game discussion, Saturday’s frenetic game was a heavyweight chess match between two teams that are making valid claims for the national spotlight.

Fresno State and UCLA traded unproductive possessions to start the game, but the Bulldogs found paydirt first with a direct-snap touchdown run by Rivers. Instead of going up by seven, Fresno State failed a two-point conversion attempt to take a 6-0 lead. If the ‘Dogs hadn’t been able to find the end zone in the game’s final 54 seconds, they would have wished they had that extra point back, which would have set them up to only need a field goal to tie and force overtime.

Tulare native Kazmeir Allen had a 66-yard kick return in the second quarter. Allen sped past the Bulldogs’ coverage team, and while he is known for his speed, Fresno State wide receiver and special teams ace Mac Dalena surged down the field to trip Allen up and prevent a touchdown. UCLA went three-and-out on the ensuing drive and was forced to settle for a field goal.

Rivers broke off a 36-yard touchdown run in the second quarter – which was largely due to a crucial in-line block from tight end Raymond Pauwels Jr. That was the longest run of the season for Rivers, and he finished the night with a season-high 136 rushing yards on 21 carries (a 6.5 average per rush) and 2 touchdowns. Rivers also caught 3 passes for 26 yards as a dual-threat out of the backfield.

Fresno State converted one of its two fourth down attempts, while UCLA failed on its lone attempt. Bruins quarterback Dorian Thompson-Robinson tried to sneak around the outside of the line on a fourth-and-one, but linebacker Levelle Bailey and safety Evan Williams came up with the crucial third quarter stop.

Once again, turnovers played a key role for Fresno State against a ranked Pac-12 opponent. While the Bulldogs had 3 turnovers and the Bruins had 2, Fresno State cornerback DaRon Bland made one of the plays of the game with a forced fumble on UCLA wide receiver Chase Cota after a 45-yard reception.

Statement win will be remembered for “a long, long time”

As time expired and the final whistle blew, the Bulldogs ran over to the Red Wave in the south end zone bleachers and celebrated the victory.

For DeBoer, he found a way to move his team past the heartbreaking loss to Oregon earlier in the season to overcome UCLA and make a statement.

DeBoer had his mind set on enjoying the moment with his team.

“It’s special, just so happy for the guys, finding the coaches and seeing the smiles. Been doing this long enough to where when these things happen and you win the big games, you want to celebrate and go crazy, but there’s also just a piece where you just want to sit and see these guys smile, laugh, take pictures, get big hugs, be loud, enjoy the moment and enjoy each other,” DeBoer said.

“This team is really close. They really are. Hopefully you can see that and hear that in what they say. It’s not just talk. It’s really what this team’s about. It’s a credit to them, and just how they’ve continued to fight the fight and hold each other accountable and keep working.”

The belief that Rivers had in his team, even when they were facing seemingly insurmountable odds with 54 seconds left, proved true.