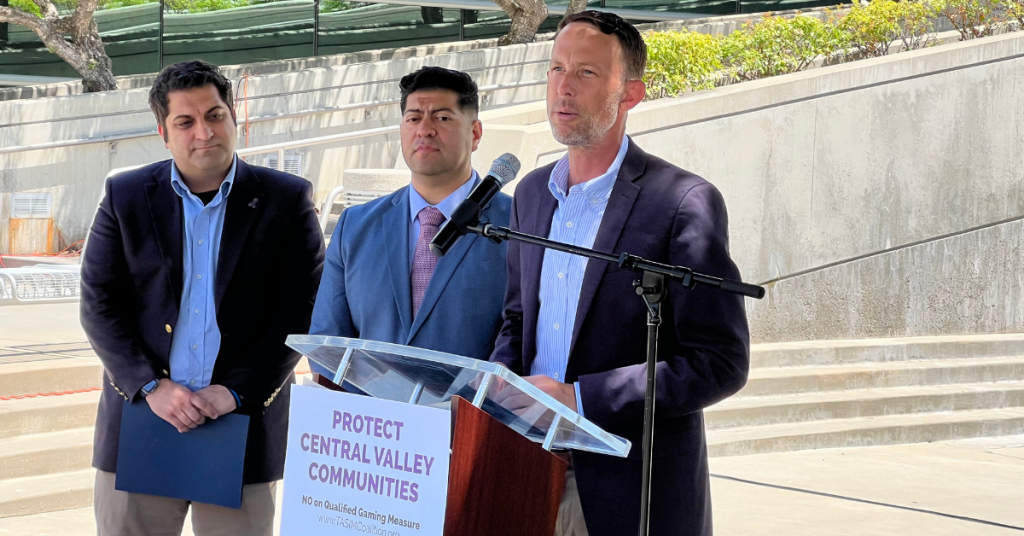 Local officials are urging voters to shoot down one of the three competing November initiatives seeking to legalize sports betting in California.

They argue one, backed by California’s Native American tribes, would be detrimental to local governments and economies.

Clint Olivier, the CEO of the Central Valley Business Federation, was joined by officials from Fresno, Clovis and Tulare County at a press conference Thursday to speak out against the Tribal Sports Wagering Act, which has qualified for the November ballot.

If the initiative passes, sports betting in California would be legalized only in-person at tribal casinos or certain horse racetracks.

A 10 percent tax would be placed on all betting at racetracks, but bets placed at tribal casinos would not be taxed.

Tax revenue in the tribal measure would be distributed in the following ways:

Another key provision in the act is that it would legalize roulette and dice games, such as craps, at tribal casinos.

But for the elected officials who were present, arguably the most important part of the initiative is that it would expand the Private Attorneys General Act, which would allow the casinos to privately hire lawyers in place of the state attorney general to sue cardrooms.

The fear is that tribal casinos would throw an endless number of lawsuits at the cardrooms, forcing them out of business due to an immense amount of legal fees putting up a defense.

That would have a direct financial impact on cities that reap the tax benefits of housing cardrooms.

In Fresno, Club One Casino pays the city over $1 million annually.

“They employ over 400 people, and we know that those resources are used for our parks, for our police, fire, infrastructure in our communities,” said Fresno City Councilman Luis Chavez. “So we know the type of negative affect that this will have on our community, particularly at the local level.”

Fresno City Councilman Mike Karbassi called the initiative an “absolute disaster,” saying it threatens to eliminate jobs “in a time when they’re needed the most.”

“There are better ways for our state to legalize sports betting without directly harming the residents of the Central Valley,” Karbassi said. “California voters must pay close attention to the fine print in this initiative so they know exactly what the qualified tribal gaming initiative will do by eliminating jobs and stifling economic opportunity in a region in the state, the Central Valley, that needs it the most.”

Karbassi also pointed to Club One Casino’s owner Kyle Kirkland and the work he does locally with nonprofits, notably animal shelters.

“What I would hate to see is a statewide initiative and us getting hoodwinked by Sacramento to take away something that’s so important to our community,” Karbassi said.

Tulare County Supervisor Pete Vander Poel agreed with Chavez and Karbassi, noting that his county also reaps the benefits of having a cardroom in Visalia, The Deuce Lounge and Casino.

“Often many initiatives are worded in very crafty ways that trick the voters in the State of California, and this is just another one,” Vander Poel said. “This is empowering more lawsuits, and it takes away the ability of counties and cities to have discretionary dollars to provide much needed services and infrastructure within our communities. And I encourage all voters to vote against this and not be hoodwinked, as was mentioned earlier, by Sacramento and by the trial lawyer lobby.”