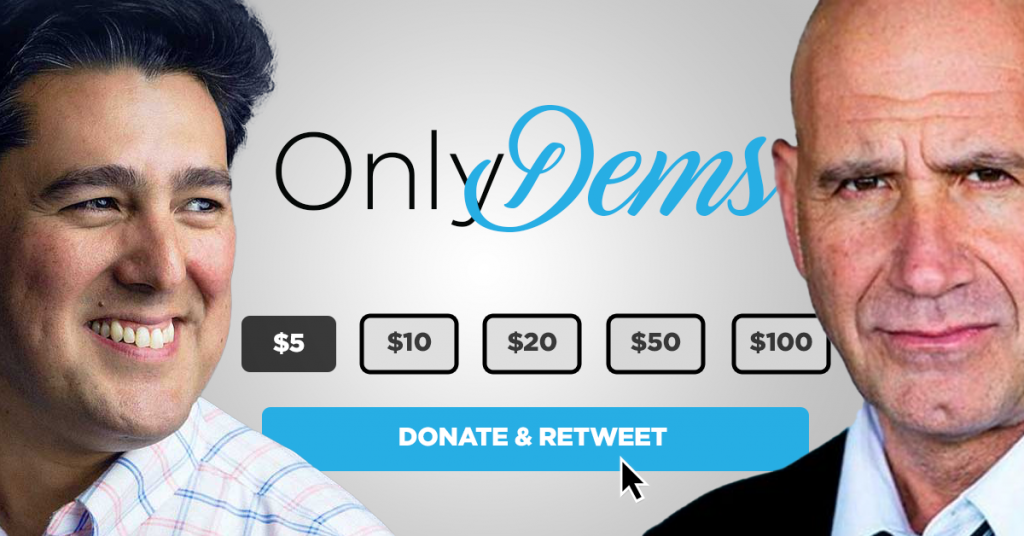 Democrats seeking to build a fundraising base to tackle San Joaquin Valley incumbents in the House of Representatives have earned themselves a new monicker.

In what has become a trademark strategy of sorts, Democratic Congressional contenders have pushed fundraising appeals desperation for retweets, shares, and small dollar donations from far-flung locales.

The strategy, which debuted first in the early aughts of the Trump era by Fresno prosecutor Andrew Janz in his highly-charged 2018 challenge to Rep. Devin Nunes (R–Tulare), was subsequently adopted by a growing share of local Congressional candidates to varying degrees of financial success.

The nickname refers to the subscription content website dominated by ordinary women who turned to selling subscriptions to personal pornographic material during the coronavirus pandemic.

Yet the OnlyFans campaign strategy, much like its source, is reliant on shocking material for success.

The problem? The absence of President Donald Trump has hampered local “OnlyFans candidates.”

The proof is in the latest fundraising figures, released Thursday:

It’s a tale as old as time.

The longtime Blue Dog Democrat has demonstrated a pattern cycle-after-cycle: less-than-stellar fundraising figures for the first fiscal quarter of his election cycle, followed by ever-increasing totals in the quarters to come.

Costa has delivered again, with fundraising figures vastly picking up from the first quarter of 2021.

The Fresno Democrat reported raising a mere $70,498.07 in April to close out the first quarter of the year, hardly numbers that guarantee re-election.

Turn the calendar forward three more months, Costa hit his stride, hauling in a respectable $320,455 on the quarter.

Meanwhile, he squares off with two Republicans.

Madera businessman David Giglio has slowly managed to get his fundraising sea legs, after providing more than $170,000 in seed funding to his effort.

Fresno Immigration attorney Nathan Brown, however, has yet to render fundraising figures to the Federal Election Commission.

Here’s a look around the other Congressional matchups in the San Joaquin Valley:

Rep. David Valadao (R–Hanford) has managed to deliver consistent fundraising figures to buttress his war chest heading into redistricting and the 2022 primary election.

The under-the-radar fundraising consistency arrives in spite of GOP discontent over his votes to impeach former President Donald Trump (which subsequently drew ire from the ex-President) and in favor of an independent-led, 9/11-style commission to investigate the Jan. 6 attack on the U.S. Capitol.

Since the last quarter, Valadao faces a few new faces for the south Valley seat.

Parra reported a second-consecutive lackluster figure to close out June, bringing in a mere $29,081 for her campaign coffers.

Former Fresno City Councilman Chris Mathys (R–Firebaugh) has managed to maintain his grasp on the second-highest fundraising totals through self-funded loans to his campaign.

Rep. Josh Harder (D–Turlock) a top target of Washington Republicans has yet to attract a formidable challenge from the right, but continues to raise some of the largest sums in the region.

Rep. Devin Nunes (R–Tulare) may not be the fundraising target he once was for local and national Democrats, but that’s not stopping his national fundraising network of small-dollar donors from keeping him among the best-financed reps (Republican or Democrat) in California.

Nunes, who is closely eyeing the gavel of the powerful House Ways and Means Committee should the GOP retake the House in 2022, raked in another seven-figure sum to expand his war chest to $11 million.

Arballo also had to jockey for funds from a new set of “OnlyFans candidates” – Eric Garcia and Lourin Hubbard – who joined him in high-volume, social media-centric fundraising tactics to recruit national donors to chip into the central San Joaquin Valley district.