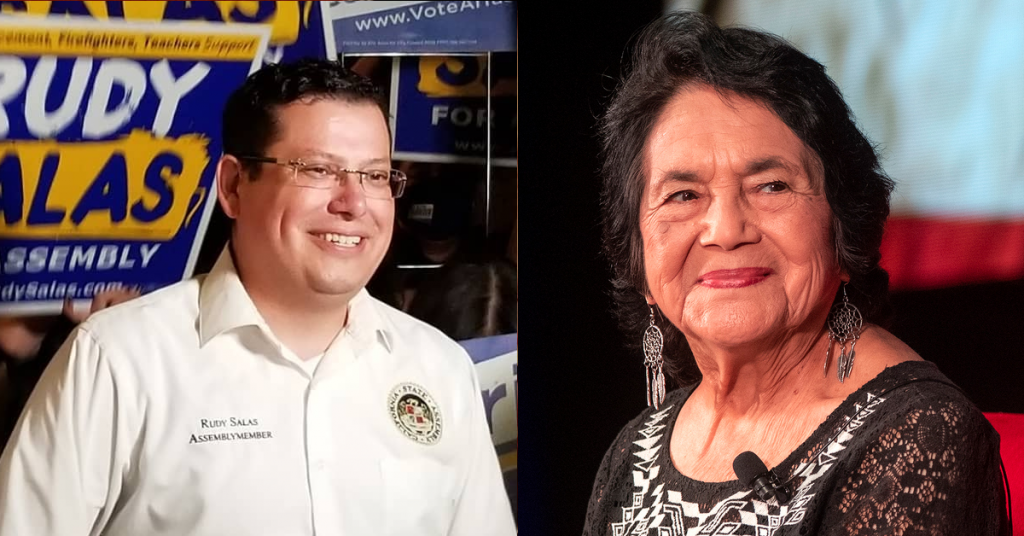 Salas first took office in 2012 and decided to forego his last term in the Assembly to challenge Valadao.

However, Huerta’s endorsement provoked the ire of a number of local progressive activists including Pedro Hernandez, the Fresno region coordinator for environmental justice group Sunrise Movement.

Hernandez took to Twitter to call Salas a “pro-oil Dem” and expressed his disappointment in Huerta.

“I wouldn’t have guessed that Dolores would pick a pro-oil Dem to endorse,” Hernandez tweeted. “Especially given how farmworkers are exposed to the harhest climate impacts due largely in part to climate denying Big Oil lobby in Kern, where Big Oil runs rampant.”

“[W]hen it comes to policy decisions and supporting politicians that harm their constituents, this type of endorsement should be fully interrogated and questioned,” Hernandez wrote.

“What trade off or clout is ever worth people’s lives? I don’t get it.”

Hernandez continued, saying he idolized Huerta growing up, but now he is left questioning how far the progressive movement has actually come if figures such as Huerta support a politician like Salas.

“Now that I’ve grown, I don’t see how anyone with such a profile can KNOWINGLY support a politician backed by industry that pollutes air, water, and land,” Hernandez wrote. “Big Oil publicly lobbies each year against most bills that help farmworkers.”

With Hernandez expecting “many farmworkers and others from the Latinx community” to be misled by the endorsement, he called on Huerta to rescind her endorsement because she is “perpetuating harm.”

Fellow Sunrise Movement organizer Alex Valdivia joined in with some ammunition of his own against Salas.

Valdivia called out UFW for endorsing Salas, who abstained in a vote on Assembly Bill 937, which would prohibit law enforcement from releasing illegal immigrants into the custody of ICE.

“CA-21 is filled with lots of hardworking farm workers who have been victims of ICE inhuman practices and y’all are endorsing him???” Valdivia wrote in response to an endorsement tweet from UFW.

Another Kern County activist, Riddhi Patel, also added to the outrage with Salas garnering the support of the Democratic Congressional Campaign Committee.

“[R]udy [S]alas has been a failure for the [C]entral [V]alley and the fact that the DCCC would back him when he is a horrible policymaker says a lot about how they run political campaigns,” Patel tweeted.