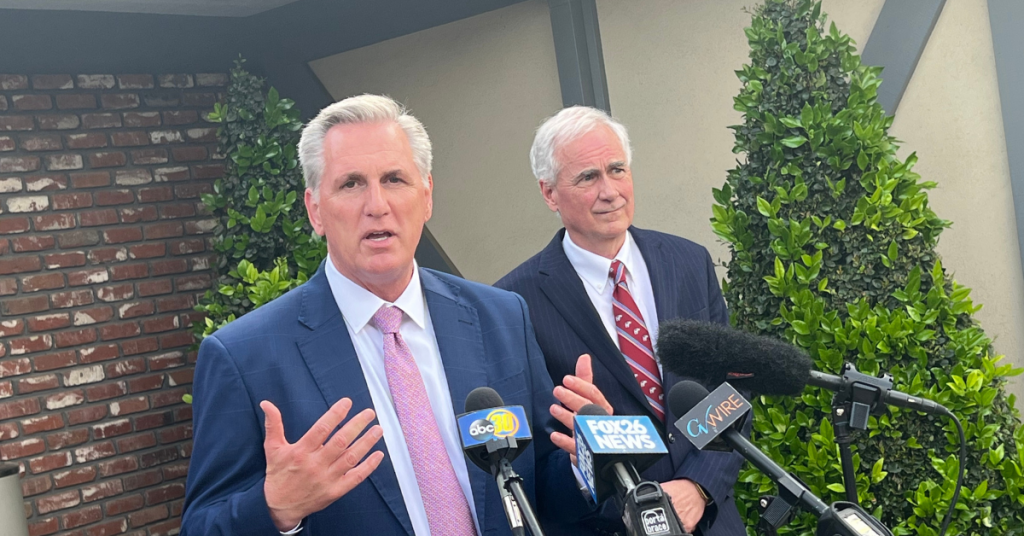 After the California Redistricting Commission approved the final Congressional maps for the state, McCarthy – a longtime Kern County representative – picked up much of eastern Fresno County, including Clovis, in the new 20th district.

Ahead of the event, McCarthy spoke to the media flanked by Congressman Tom McClintock (R–Elk Grove), discussing topics ranging from energy to the war in Ukraine.

“We should be producing more oil,” McCarthy said. “This governor has reduced the amount of oil that’s been able to be produced in California by 20 percent, and what he’s done is he’s brought in Russian oil, 50,000 oils a day, because he’s reduced the ability to produce 87,000 barrels. And where would that oil be produced? Right here in the Valley.”

“The thing that people have to understand, if you care about the environment the way I do, American natural gas is 41 percent cleaner than Russian natural gas,” McCarthy said. “And what we should be able to be doing is becoming energy independent. That means all of the above: That means wind, solar, oil, natural gas, nuclear as well.”

The Republican leader compared the energy crisis to European reliance on Russian oil.

“We’ve watched what has happened in Europe. We’ve watched that it’s made Putin stronger. Putin now uses that money to invade Ukraine. We’ve watched the European countries weaken their ability to respond. Why? Because they’re beholden to Russia,” McCarthy said.

“We should not be dependent on any other nation especially when God has given us the power of the natural resources that we have here. We could be able to produce it in an environmentally sound way, at the same time creating jobs, making gas lower, and making America stronger. And when America’s independent, not only is America stronger, the world is safer.”

Further on the topic of Russia, McCarthy said he recently returned from a bipartisan trip with Congress to Poland, Romania and Belgium.

He blasted President Joe Biden for not arming Ukraine before the invasion started.

“I’ve said many times before: Had Joe Biden been able to move the weapons sooner, I don’t believe Putin would’ve entered,” McCarthy said. “By holding back and waiting, by only offering sanctions after Russia invaded, he gave an opening. Had we been able to supply Ukraine with the weapons to defend themselves – Ukraine has never asked for the American men and women to fight. All they’ve asked is to let them defend themselves.”

With the midterms approaching this year, McCarthy was confident that Republicans will retake the House.

“The midterms are approaching, and I believe these midterms will be a change in course of the majority in the house,” McCarthy said. “We only need five seats to win the majority. But what you’ll find with Republicans, we’re not going to sit back and just criticize, we’re going to lay out to the American public exactly what we’ll do.”

McCarthy said the GOP will focus on presenting sound fiscal policy, securing the border, making America energy independent, funding the police, ensuring that district attorney’s uphold the law and that parents have a say in their children’s education, among other things.

“There’s a lot to be done, and we’re not going to wait to that day to start,” McCarthy said. “We’re starting today.”