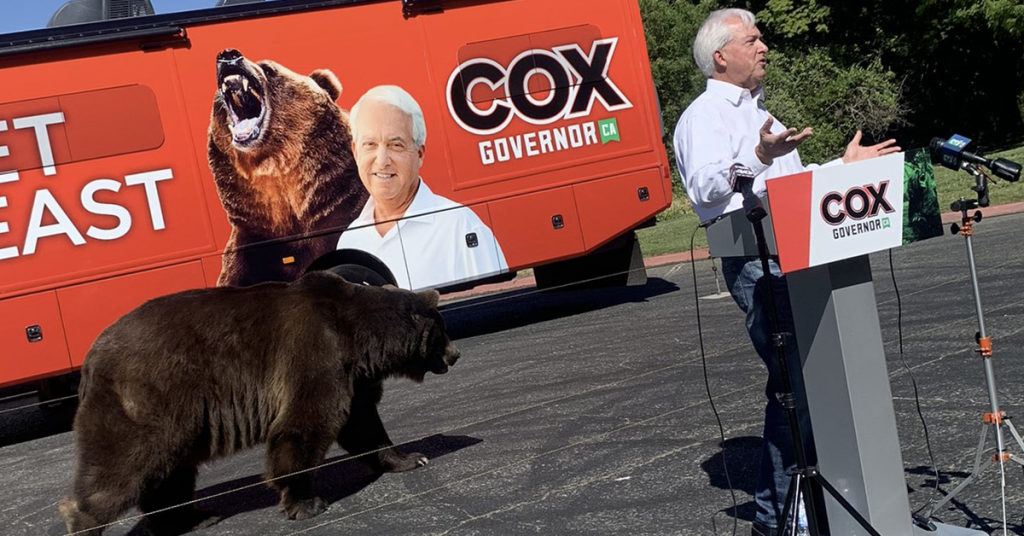 California gubernatorial candidate and San Diego businessman John Cox kicked off his tour of California with a 1,000-pound live bear on Tuesday.

The public relations move underscored a $5 million ad buy from Cox’s campaign to frame the race as between Beauty and Beast, referring to Gov. Gavin Newsom – who faces recall this year – as a “pretty boy” Governor.

Cox is up statewide with this spot this a.m. — pic.twitter.com/F9fyVa0SOJ

Cox and the bear made a stop at a regional park in Sacramento.

Speaking there, Cox said Newsom should immediately call for a special session of the Legislature to address the Golden State’s housing crisis, noting the skyrocketing costs for both rental housing and residential real estate.

Later Tuesday, Cox visited in Yountville at The French Laundry, the Michelin-starred restaurant made infamous by Newsom’s coronavirus-rule breaking birthday dinner for a lobbyist friend in November, on Tuesday.

“What’s happened to this wonderful, beautiful state?” Cox asked during his visit to the eatery. “Politics happened. We chose beauty over brains.”

The People for the Ethical Treatment of Animals (PETA) were unsurprisingly dismayed by the use of the 1,000-pound Kodiak bear named “Tag.”

“Gone should be the days when wild animals were treated as toys or props, so it’s unfortunate and shameful that Tag the Kodiak bear has been exploited in this way,” Debbie Metzler, PETA’s associate director of Captive Animal Law Enforcement, said. “It’s also dangerous, given the bear’s long, sharp claws, which can disfigure or even kill someone with one swipe. Bears need to be left alone to live a bear life, not confined to a pen on asphalt and wheeled out for events—and PETA urges anyone with an ounce of decency to keep dangerous wild animals out of their publicity stunts.”

The organization said the vendor tasked with handling Cox’s bear, Frazier Park-based Working Wildlife, had a lengthy history of citations for violating Federal animal welfare laws, including a lack of adequate veterinary care.

CalMatters’ Emily Hoeven reported that the trainer on-hand for Cox’s Sacramento stop had fed the bear cookies and chicken, and added that the Kodiak bear pulled in a bigger daily appearance fee than he did.