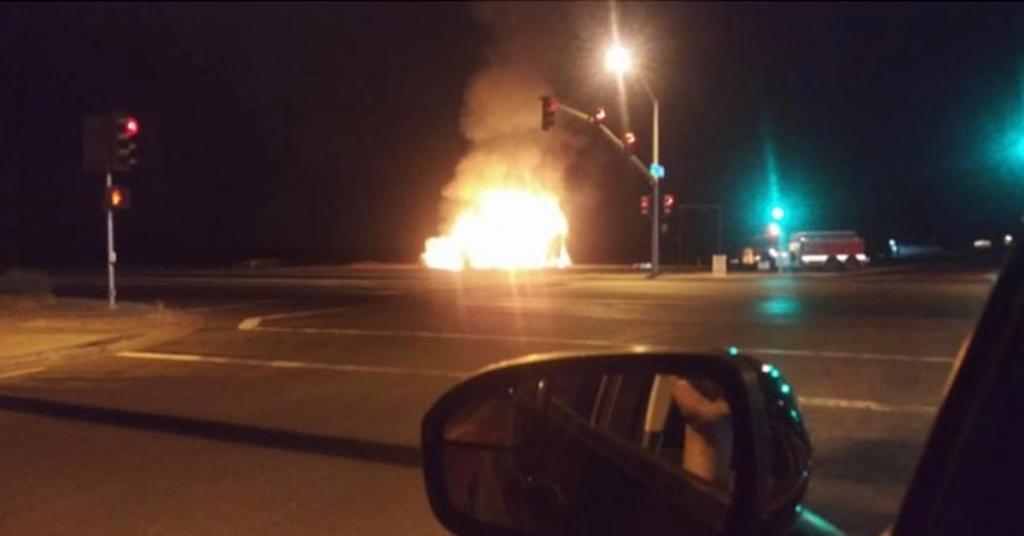 With 35 days until Election Day, campaign vandalism is in full-swing in the San Joaquin Valley.

While the typical shenanigans – stealing yard signs from residential homes and overnight removal of large road signs – are regular occurrences regardless of the election year.

POLITICAL VANDALISM: We’re just 34 days away from the 2020 Presidential Election.

People in Fresno aren’t holding on where they stand – so much that people’s signs are being destroyed/stolen.

What do you think about this? pic.twitter.com/ypbVj8uPkU

Late Monday night, Facebook users within the city of Dinuba reported that a 8-foot by 30-foot banner belonging to Rep. Devin Nunes (R–Tulare) was lit ablaze.

The sign, located on a farm at the intersection of Avenue 384 and Road 80 south of Dinuba and east of Traver, was left to nothing more than a pile of charred remains.

“Farmers put a huge Devin Nunes banner on their haystack. Some Jack ass [sic] went and set it on fire last night…” Nunes said, posting a photo of burnt over hay.

Farmers put a huge Devin Nunes banner on their hay stack. Some Jack ass went and set it on fire last night…

“After talking to fellow farmers at our local meeting place – a coffee shop nearby – we agreed to stack [our hay] up and put signs supporting Congressman Nunes and President Trump,” Dolieslager said.

That’s when the trouble started.

The signs for Nunes and Trump were repeatedly vandalized in the weeks leading up to the haystack fire – first with spray paint and later with knives.

Ultimately, vandals managed to cut down the Trump sign and swiped it. The Nunes sign was covered in graffiti, before being replaced by his campaign.

“The fire was started a little bit before midnight by whoever is terrorizing my corner,” the farmer and livestock auctioneer said. “I got the call around 12:30 a.m.”

Fire officials had little way of saving the hay stack.

Since the blaze, Tulare County Sheriff Mike Boudreaux has assigned an Ag crimes unit to investigate. The incident was also reported to the U.S. Capitol Police, the investigatory agency responsible for incidents regarding the safety of members of Congress.

For Dolieslager, the headaches are coming as the smoke clears. While a specific culprit remains at-large, he has no qualms about who – in the abstract – is responsible: opponents of Nunes and Trump, utilizing dangerous tactics that have become all-too-familiar in riot-laden cities this year.

“We’re not stupid,” he said. “We know it wasn’t some supporter of Mr. Nunes or Trump. Sadly, this is what we’re stuck dealing with. Yet, when you voice an opinion, we don’t bust into people’s businesses, or break into jewelry stores or swipe tires from a tire shop.”

Dolieslager resigned himself to a sad realization, while doubling his resolve.

“They’re even coming for the local farmers,” he remarked. “But we’re not going to take this lying down.”