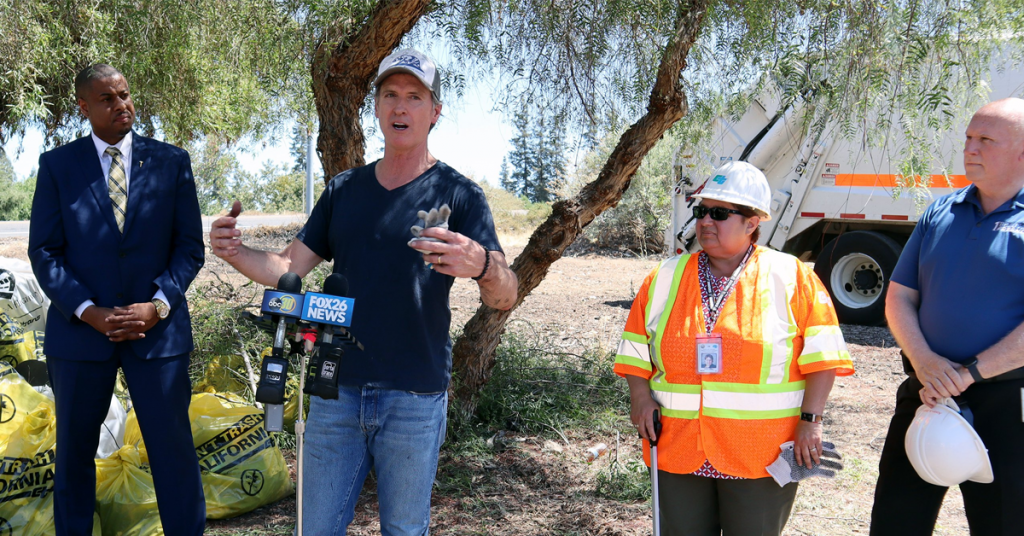 The jeans and T-shirt-clad executive helped Caltrans workers pick up trash, following an early event in Richmond where he kicked off Clean California.

Clean California is a $1.1 billion program that will fund local beautification and litter abatement programs that is funded by the state budget that was recently approved.

“This is a flywheel over the course of the next number of months, commitment over the next few years, to launch something that will have meaning and purpose and, yes, clean up the damn streets in California,” Newsom said.

“I see the exact same thing you see. I see the encampments. I see couches and mattresses. I see graffiti. I see things that no one should see out here in parkelts and entrances and access to freeways, freeway underpasses, overpasses, downtown corridors. We’ve got to clean this place up. It’s sort of a basic function of government.”

The statewide program will also create 11,000 jobs, which Newsom said will provide many career pathways for those in need of second, third and fourth chances.

One such local program that will benefit from Clean California is Mayor Jerry Dyer’s Beautify Fresno, which Newsom praised.

“I want to thank Mayor Dyer and his team for establishing an office and organizing an effort to beautify and revitalize,” Newsom said. “It’s not just about cleaning up litter. It’s not just about addressing encampments. It’s also about leaving something behind, beautifying the landscape and looking at art components, which I really appreciate this notion of murals and getting those artistic expressions, sense of place, community, culture that we can attach to some of these efforts.”

Newsom’s visit came just hours after gubernatorial candidate John Cox was in downtown Fresno with an eight-foot ball of trash, which he said symbolizes the trash that the state’s homeless population is forced to live in due to the governor’s failures.

As part of his plan to curb homelessness in California, Cox said he would cut Project Homekey – a program that purchases hotels and apartments for municipalities to convert into long-term supportive housing – and redirect those funds to programs that provide services for addiction treatment and mental health.

In response, Newsom defended Project Homekey and the state’s actions against homelessness, noting that the budget set aside $12 billion for homelessness response.

“Project Roomkey and Homekey have literally changed the lives of tens of thousands of Californians, and Homekey itself has created 6,000 housing units in 5.5 months,” Newsom said.

“That success is demonstrable here in Fresno. You’ve been able to get 293 people out of encampments. We all lament encampments, and we got them into housing because these guys worked their tails off to place individuals, give them a key, lock, door, a house, a place to go home because of Roomkey and Homekey.”