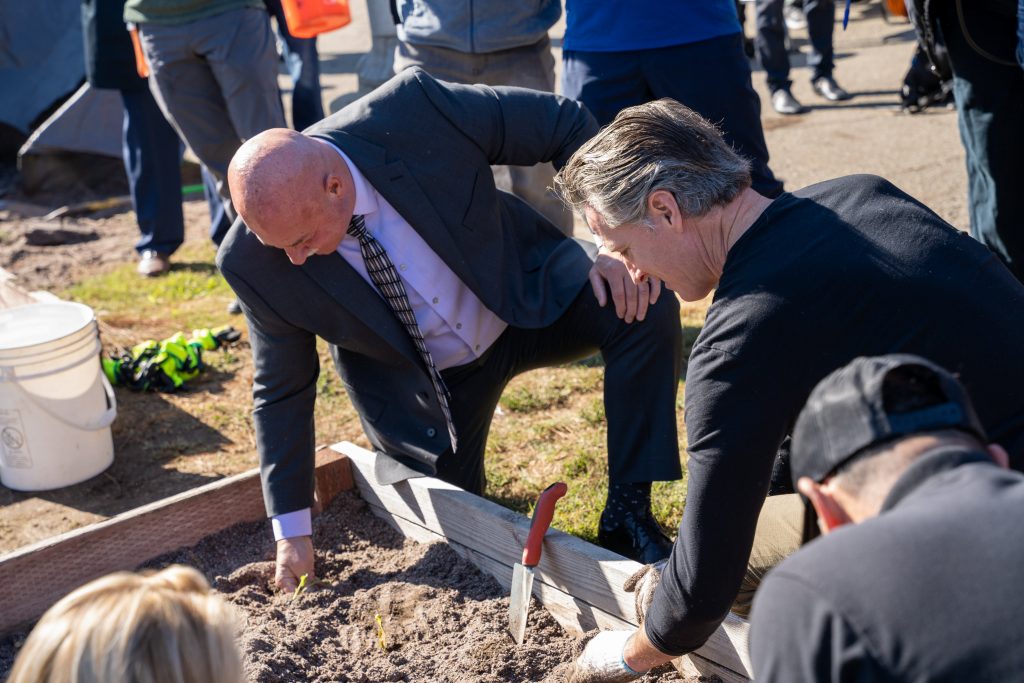 Just a few days after winning his reelection bid for a second term, California Gov. Gavin Newsom swung through Fresno to participate in a local community service project and highlight the state’s commitment to uplifting service opportunities.

The governor was joined by his wife, Jennifer Siebel Newsom, in building and planting a community garden in west Fresno on Thursday.

The garden is located at the Mary Ella Brown Center and operated by West Fresno’s Family Resource Center.

It will help provide food to those in the surrounding neighborhood who may not have easy access to fresh vegetables.

Despite being on competing sides of the political spectrum, Newsom was buddy-buddy with Fresno Mayor Jerry Dyer on Thursday.

“We’re fortunate today to have the governor and the First Partner here in Fresno,” Dyer said in his welcoming message to Newsom. “He could’ve been doing a lot of things. They could’ve after the election, like many elected officials are out somewhere else maybe are going to Hawaii or enjoying it. But for whatever reason the governor and the First Partner chose to be right here in Fresno working side-by-side planting and doing all the things that make this community special.”

Dyer said he believes Newsom came to Fresno because he feels the governor cares about Fresno and that the entire Central Valley is important to him, based on the conversations the two have had.

“I hope all of you know how fortunate we are to be chosen to be the place where the governor chose to be here today to provide his service to our community.,” Dyer said.

Newsom took the floor after Dyer and heaped praise on the Fresno mayor.

“It’s pretty obvious we’re big fans of your mayor. I’ve been bragging on him up and down this state, and I think his presence here today sort of symbolizes the spirit that brings us all here today. And that we’re all in this together and we’re going to share the future. Divorce is not an option,” Newsom said.

“And at the end of the day after these hard-fought elections where everybody’s seemingly going at each other and you wonder can it get much worse, we’re here to remind everybody it can get much better, that we have the capacity to live together, advance together and prosper together across every conceivable difference.”

The governor said the people of the Central Valley deserve better leadership from the state and federal government.

“We’re here in that spirit to enliven your confidence in Sacramento, that we have your back, that you matter, we care,” Newsom said. “And I don’t think there’s a better way of expressing that sentiment than not just showing up but showing you mean it by doing something.”