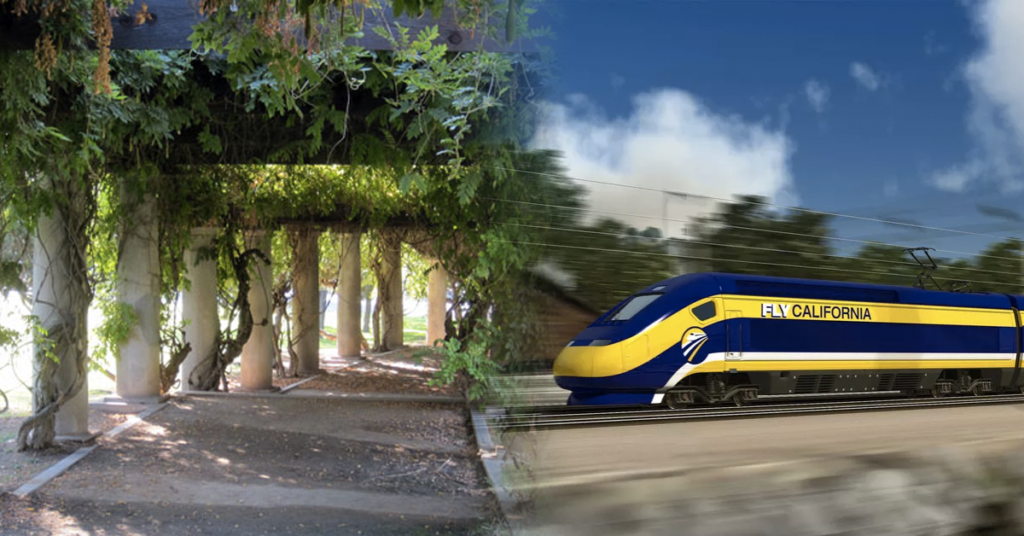 The commissioners reviewed to two rather modest parts of the project:

1.) The state High-Speed Rail Authority plans to build a 2,866-foot long, 14-foot high sound wall along the eastern edge of Roeding Park. The fence would be built on HSR property. The idea is to have a fence that is both effective and beautiful. Says the staff report written by Historic Preservation Specialist Laura Groves Van Onna: “Staff encourages discussion in pursuit of optimal design that enhances … the historic character of the property.”

2.) This part of Fresno includes the well-known Belmont Avenue underpass and traffic circle, located near the southeast edge of Roeding Park. It’s here that HSR plans to build a massive overpass so that east-west traffic on Belmont won’t be negatively impacted by the bullet train (I’ve already reported on this overpass project for The Sun). All this construction would occur in an area full of Fresno history. The commissioners will discuss options for an outdoor interpretative exhibit to be placed in the neighborhood that would honor this history for generations to come.

There is a proposed design for the sound wall. An example of this design is included in the commissioners’ packet. To a layman like me, the design is appropriately modest. It doesn’t try to be the star of the neighborhood.

The design would be applied to both sides of each sound wall panel. Plants would be installed at regular intervals along the park side of the sound wall. The plants could consist of self-attaching plants or bushes. The plant species will be determined in consultation with City Hall.

It’s the outdoor interpretative exhibit that I find especially interesting.

What we currently have is what City Hall calls the “Belmont Avenue Traffic Circle and Subway.”

Staff recommends that the exhibit be located on the eastern side of the HSR-built overpass. As I understand things, the exhibit would have two parts. There would be a nearly 90-year-old metal plaque from the original structure, commemorating what was once there. And there would be an embedded narrative with photos explaining how the Belmont “subway” and traffic circle came to be.

The commissioners must deliver a recommendation to the Brand Administration and the City Council on the specific placement and design of this two-part, visitor-friendly exhibit.

The latter part of the exhibit would speak to the glory of what might seem to some as a mundane piece of a city’s built environment – railroad grade separations.

What follows is taken from the proposed interpretative exhibit:

“Belmont Avenue was heavily traveled in the early 20th century, particularly during the summer months when traffic peaked at 11,000 vehicles in a 16-hour period. The high level of traffic, coupled with the frequency of Southern Pacific mainline railroad crossings, made Belmont Avenue dangerous and frequently caused delays for travelers on this second of former Highway 99.”

A solution was proposed in 1930 by Jean L. Vincenz, a civil engineer and Fresno’s commissioner of public works. Belmont would go below the railroad tracks. A traffic circle, 400 feet in diameter, on the west side of the tracks would facilitate the movement of vehicles.

Local engineers and city officials agreed with Vincenz. Construction on the “subway” and traffic circle began on Feb. 23, 1932. The grand opening, “highly anticipated” by Fresnans, was on July 22, 1932. People lined both sides of the underpass during the celebration.

“The fanfare began with an address by Mayor Z.S. Leymel and a ribbon cutting by five-year-old Joan Vincenz, the daughter of project engineer Jean L. Vincenz, who also unveiled two commemorative plaques. When the electric lights were illuminated for the first time, more than a thousand cars drove through the new underpass and around the beautifully landscaped traffic circle, which was reported to be the largest in the state. A motorcade carrying the who’s who of Fresno was led by members of the California State Chamber of Commerce, the Southern Pacific Company, the San Joaquin Tourist and Travel Association, the City Planning Commission, and the Fresno County Chamber of Commerce.”

The traffic circle and subway were determined to be eligible for listing on the National Register of Historic Resources. Among the reasons: They were part of important Depression-era civil engineering projects related to the railroad industry; the traffic circle/subway represented the first configuration of this type in California to address a key railroad grade-separation; the traffic circle was among the first examples of its type in the western United States.

But, we’re coming to an “end of an era.” The interpretative exhibit says: “Construction of the California High-Speed Rail project required the replacement of the Belmont Subway with an overcrossing structure and the reconfiguration of the traffic circle.”

The backstory for all this is a bullet train project that is far from a sure bet of ever being completed, even if we’re talking about just the Merced-to-Bakersfield piece.