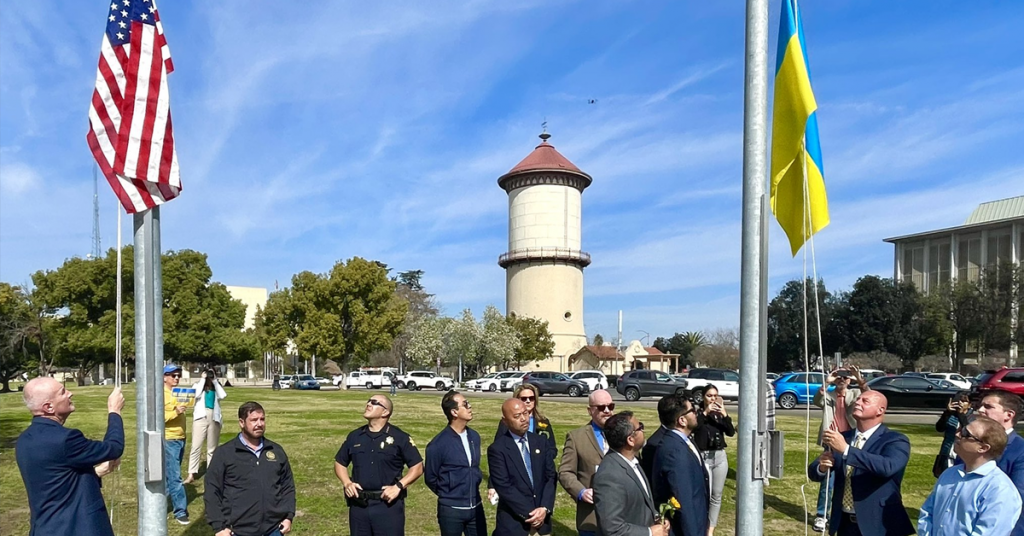 Amid the invasion by Russia into Ukraine, leaders of the city and county of Fresno stood in solidarity with the Ukrainian people Tuesday morning.

The city held a Ukrainian flag raising ceremony at Unity Park at Eaton Plaza in downtown Fresno to show support for Ukraine.

At the ceremony, Fresno Mayor Jerry Dyer spoke out against Russian President Vladimir Putin for sending armed forces into Ukraine.

“Vladimir Putin is an evil man,” Dyer said. “He is delusional. He is paranoid. He’s a monster in a human body, and he must be stopped at all costs. If he isn’t, he will destroy those who stand for democracy today across our world.”

As many Ukrainians flee their homeland in search of safety, Dyer said Fresno would welcome any refugees with open arms.

“As we stand here together, I want the Ukrainian people to know that not only do we stand with you in solidarity, our doors will be open to you in the City of Fresno and Fresno County,” Dyer said.

“We love you. We stand with you, and it is my honor to be able to raise the Ukrainian flag here with you today in Fresno.”

“We cannot stay silent about this issue. We need to be involved not only as a community, but as a nation and do everything that we can to stand with our NATO partners and also to stand with Ukraine,” Magsig said, noting that the spread of dictatorship in Europe could reach American shores.

“We cannot stay silent because over time, as our European partners continue to have to face dictators like this, eventually this problem will come to us. Right now, we need to stand up and stop this.”

Fresno City Council President Nelson Esparza said Tuesday’s flag raising is a “crystal clear message” that the city stands with Ukraine and for democracy at large.

“The City of Fresno and our residents are horrified by this unprovoked Russian aggression against the people of Ukraine, undermining their self-determination and initiating a war whose scale has not been seen in decades,” Esparza said.

“The sheer visuals of the attack on Ukraine by Russian forces are to me a sobering reminder that peace is fragile and aggression against an unprovoked and independent nation cannot and will not be tolerated. It’s just something we can’t ignore.”

Mykhaylo Skitsak, a Fresno nurse who was born in Ukraine, spoke to the pain that the local community is currently experiencing.

“I was born in the free Ukraine,” Skitsak said to start. “I don’t know any other Ukraine, but free Ukraine. It breaks my heart and the heart of my fellow citizens that Ukraine is being bombarded and its freedom is being taken away.”