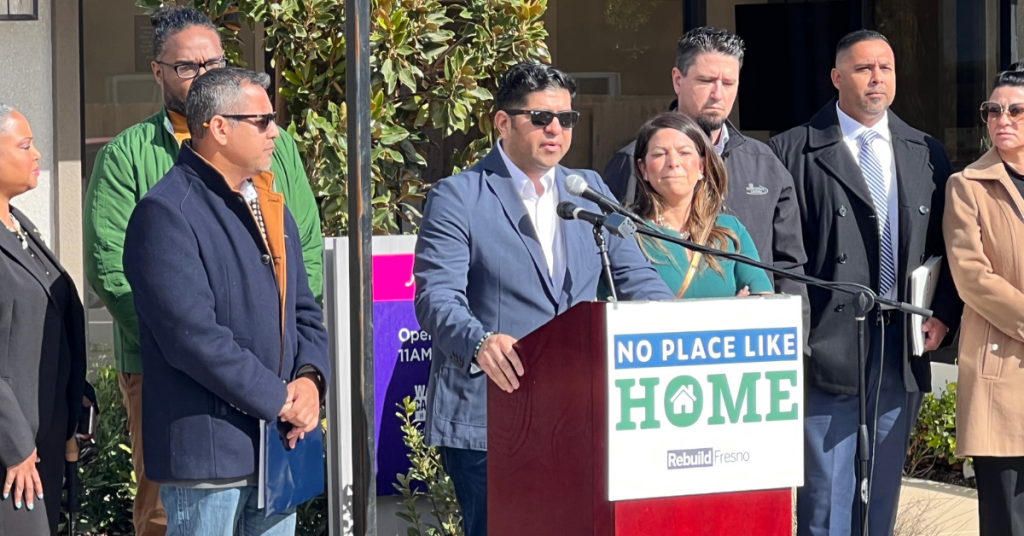 On-site at a new housing development west of Highway 99 near Justin Garza High School, three members of the Fresno City Council revealed their plan to address the housing crisis.

Councilmembers Esmeralda Soria, Luis Chavez and Miguel Arias announced the No Place Like Home Initiative, a four-pronged plan that they say is focused on the middle-class as well as the burgeoning homeless population.

The four-pronged plan is as follows:

The initiative will be funded by the city’s American Rescue Plan Act of 2021 (ARPA) allocation.

The council will consider the initiative during Thursday’s council meeting.

Soria presented the down payment assistance program, which would provide a one-time loan grant of up to $15,000 to eligible families or individuals.

To be eligible, families or individuals cannot earn more than $120,000, they must be a first time homebuyer who have lived in Fresno for five years and the home must be used as a primary residence.

The loan would be zero percent interest and may convert to a forgivable grant after five years.

“What we’re seeing more today is that the middle class families are becoming really priced out, and home ownership has become more unobtainable for them. So we are hopeful that this downpayment assistance is going to help these hard working families, middle class folks who are struggling to break into the real estate market, yet earn too much to receive the low-income assistance that actually exists today,” Soria said.

“This program will be a game changer for Fresno families. It is a downpayment on creating safer and stronger communities, ultimately growing our local economy.”

While tiny homes have been a topic of conversation at City Hall for several years, Chavez, Arias and Councilwoman-elect Annalisa Perea visited Austin, Texas, within the past few months to tour a tiny home development.

Chavez said he would like each councilmember to identify areas within their respective districts that could house tiny homes.

One location that he has in mind in his district is the southeast corner of E. Church Ave. and S. Orange Ave.

“Our focus with this initiative is to turn renters who’ve been living in west Fresno for generations into home owners that could buy and continue living in west Fresno, where they’re not forced to relocate for cheaper rent or cheaper housing in other parts of the city,” Arias said. “That’s going to be a critical component that addresses the concerns that many residents have raised for years about the dislocation that occurs when we invest in new developments.”

Arias said it typically takes two years for a developer to get plans for a new home through the planning and permitting process, and a subdivision or master plan usually takes around five years.

“We’re committed to shortening that time to making sure that projects that come in for development, whether they’re creating jobs or new housing opportunities, whether they’re affordable or market rate, gets through the planning and permitting process much faster,” Arias said.

Along with the proposal from the three councilmembers, the council will also consider three proposals from Mayor Jerry Dyer as part of his One Fresno Housing Strategy on Thursday.

However, while their proposals are not directly competing with the mayor’s the trio of councilmembers view their ideas as something that could have an immediate impact.

“The mayor’s One Housing Strategy has dozens and dozens of recommendations as part of it, and it’s a compilation of a series of actions that have been taking place for 20 to 30 years in our city,” Arias said. “And it still hasn’t resulted in immediate relief. We’re hopeful that our proposal is about taking immediate action and committing dollars today versus doing it over a long period of time.”