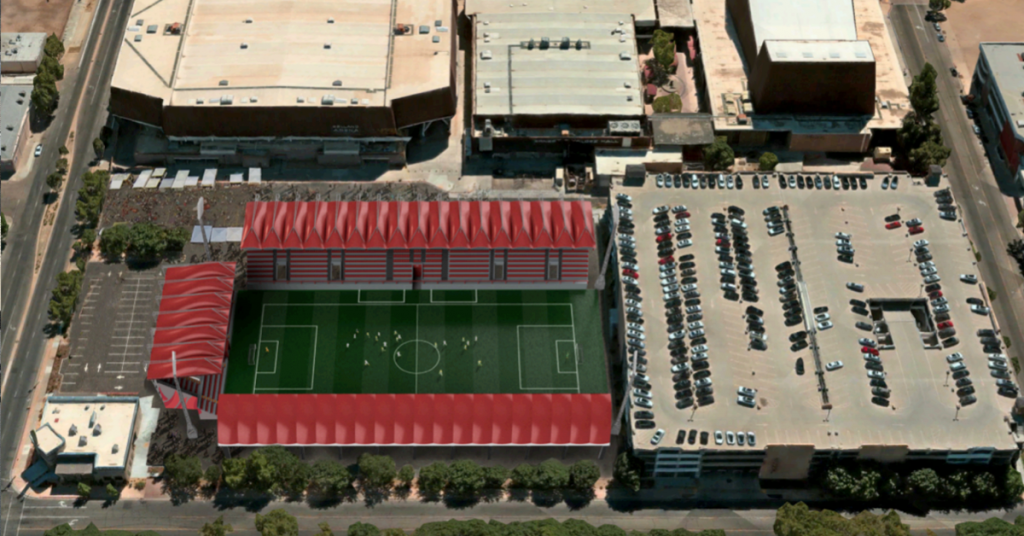 The Fresno City Council is set to hear a public presentation from the Fuego regarding the bid to purchase Selland Arena, Valdez Hall and the parking lot, which is a change of pace for the negotiations.

Previously, the city council had discussed the deal with the Fuego behind closed doors, but the two sides had been unable to come to an agreement.

At the beginning of March, Councilman Miguel Arias nixed a closed session meeting due to a lack of financial information provided by the professional soccer franchise.

The Fuego finally got back on the closed session agenda in April to discuss the price and terms of the sale, but Thursday is set to be the first time the council publicly discusses a proposed deal.

Per the Fuego’s presentation, the team will walk the council through its plans for the Selland Arena site.

The team has submitted a rendering of its proposed soccer stadium, which will be built in the parking lot between the Cosmopolitan restaurant and the parking garage currently on the property.

The stadium will house 7,500 seats and will be able to host various sports and events, including football, lacrosse, high school soccer, concerts, music festivals and graduations.

An outdoor plaza space on site will also be available for events.

The franchise will transform Valdez Hall into an indoor sports center, which will include four indoor futsal courts, and facilities for mixed martial arts, wrestling, jiu jitsu, dance, yoga, spin and other sports.

Selland Arena will continue as a basketball and hockey arena, but the Fuego are also seeking to host Hispanic-centric concerts there as well as other events.

Along with the downtown plan, the Fuego intend to build a training facility at Rd. 40 and Ave. 10 north of town in Madera County.

That facility will include nine soccer fields, another field with 1,000 seats and an indoor training and development center.

The Fuego also intend to work with youth programs throughout the community.