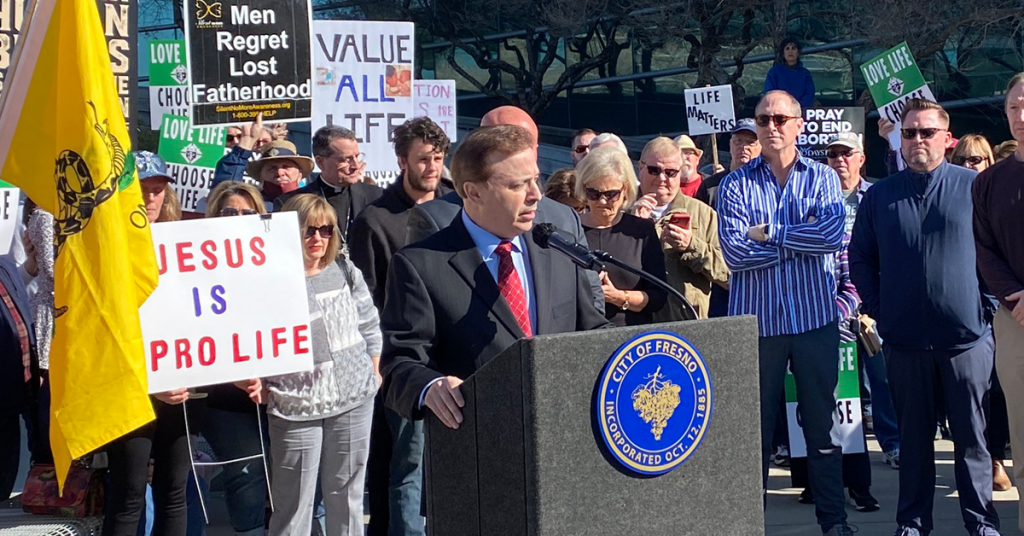 In response, Councilman Garry Bredefeld and Mayor Jerry Dyer organized a pro-life rally in front of City Hall on Tuesday morning to speak out against any future attempts to push the pro-choice resolution forward.

“This resolution supporting abortion is wrong and extremely divisive,” Bredefeld said. “There is no rationale for it being on the council agenda, except for radical city council politicians pandering to those in support of abortion.”

Bredefeld pointed to Soria’s campaign for the 27th Assembly District, saying she is “simply pursuing money” from pro-abortion groups.

“She thinks this resolution will help her in obtaining that money,” Bredefeld said. “Frankly, this resolution and the actions of these council members are a complete disgrace.”

While no direct action would immediately result from the the resolution passing, the city’s official stance on abortion would be extremely supportive.

As part of the pulled resolution, the city would declare its stance on abortion as follows:

“The City is hereby a champion and defender of health equity and reproductive freedom for all, so that anyone may have access to the reproductive services they need, when they need them.

“The City calls on the United States Congress to protect reproductive freedom nationwide by enacting legislation to protect access to abortion and other reproductive care without government interference.”

Dyer agreed with Bredefeld, saying the resolution has “absolutely no business appearing on a local city council agenda.”

He also went after Arias and Soria for initially putting forth a resolution that would not contribute to job creation, street maintenance, public safety or homelessness reduction.

The mayor said he would veto the resolution if the council ever passed it in the future.

However, the council could override Dyer’s veto with five votes.

In a statement, Arias pushed back on assertions that the issue was out-of-bounds for city discussion, but pointed to bigger issues on the agenda for Thursday.

“It is obvious that women’s rights and voting rights are under unprecedented attack, and it is everyone’s business, including ours,” Arias said. “This week, there are very important items before the council, including how we invest $170 million to ‘Rebuild Fresno.’ Spending time responding to potential items not on the council agenda or organizing political rallies is not the best use of time for a city in a housing and homeless crisis.”