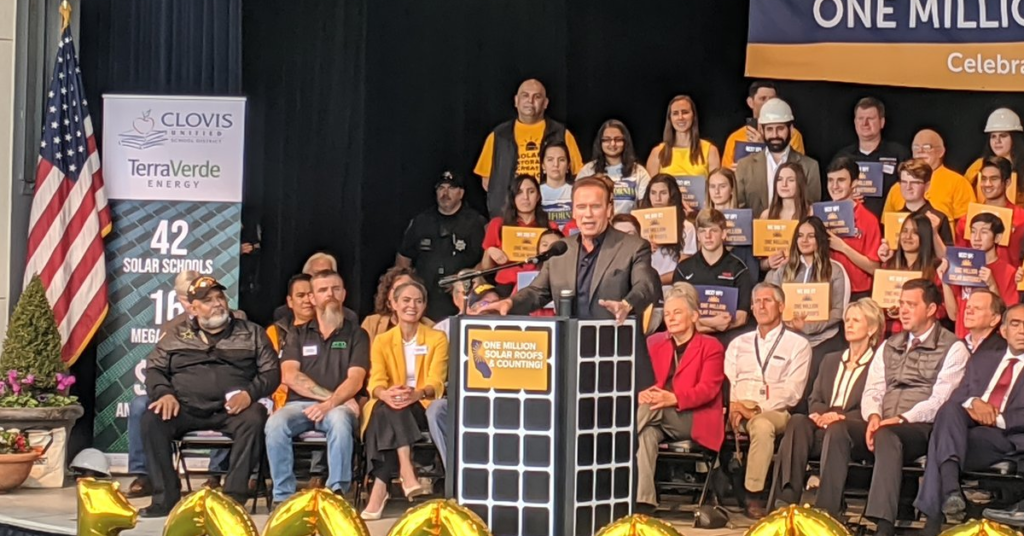 Schwarzenegger signed the Million Solar Roofs Initiative (SB 1-Murray) in 2006. The bill set the goal to build one million solar energy systems on homes, schools, farms and businesses in California.

“I’m very happy to be in Clovis to celebrate California’s successful million solar roof initiative,” Schwarzenegger said. “It is really great to be here to celebrate it at this school and in the Central Valley.”

The Central Valley experienced considerable growth with solar energy since 2006. Bakersfield, Fresno and Clovis rank third, fourth and sixth, respectively, for the number of solar roofs in California. The three cities have over 60,000 solar roofs total.

Brown took his opportunity to speak to tell the students that there is “a crisis in climate change”.

“It’s getting hotter,” Brown said. “The heat is going to bring more tropical insects and diseases. It’s going to [raise] the sea level, which is going to destroy parts of our coastland. It’s going to drive people out of other countries so they become migrants.

Brown added, “I don’t want to scare you, but we’re in big trouble. If we don’t do something, things will get a lot worse.”

Brown said Fresno is ahead of the curve because of high-speed rail.

“And we’ve got people in America and this state, ‘Oh my God. How can you build high speed rail?’ It’s easy. Just spend the money, get the engineers and get going. And when you run that train, it’s going to run on renewable energy. A lot of solar energy is going to power that thing, so it’s totally clean. It’s fast.”

Brown encouraged the students to work on renewable energy ideas to help prevent pollution in the future.

“It’s pretty simple, you change the climate, and you make it worse, we all suffer,” Brown said. “So there’s a lot of stuff we’re doing in state government and a lot of stuff you do in your life, but you all assume when you get up in the morning the sun’s up there and shining, even if it’s foggy. We could screw that up, and not just you, but the whole world could be in deep, deep trouble.

In fact, we’re heading there right now, and we’ve got to turn back. You have to turn us back. And I made climate change my No. 1 priority, because it is. There’s nothing more important to your future than preventing our climate from getting worse, and in fact making it better. We have all this asthma going on. If we could take all those trucks and convert them to hydrogen and other forms of renewable energy, that asthma would go dramatically down. That’s why I support clean air, solar, wind and all the rest of it.”

Schwarzenegger added, “And this is why we have to fight and get rid of fossil fuels, because it’s killing us. It’s creating – like the governor said – asthma. It is creating heart diseases, mental diseases, cancer – all kinds of things, and people die prematurely.”