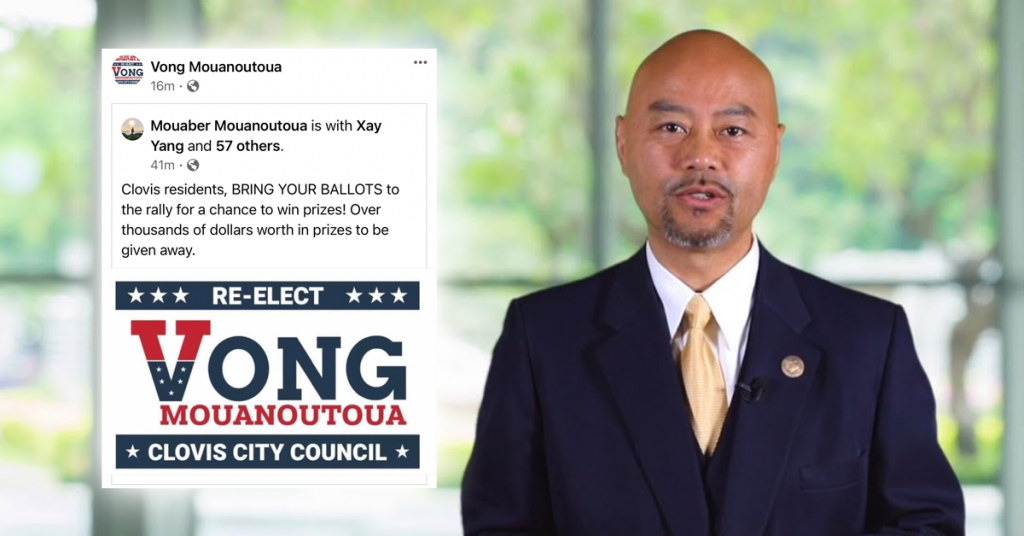 Despite a message posted on Facebook indicating thousands of dollars in prizes for absentee ballots turned in, Clovis City Councilman Vong Mouanoutoua says his Saturday get-out-the-vote rally is not engaging in a quid pro quo for votes.

The controversy arrives mere days before the close of polls on Tuesday night.

“This is a rally to get out the vote. And so there will be a raffle, but it’s nothing to do with ballots,” Vong Mouanoutoua told GV Wire.

Anyone who attends will receive a raffle ticket, the councilman said.

Thursday, Mouanoutoua’s brother, Mouaber Mouanoutoua, posted an invitation on Facebook reading: “Clovis residents, BRING YOUR BALLOTS to the rally for a chance to win prizes! Over thousands of dollars worth in prizes to be given away.”

Since publication, the message has disappeared.

“I’ve been knocking on doors since September, talking with voters and earning their support,” Pearce said. “I didn’t realize we could have a carnival and buy votes with prizes.”

She added that giveaways like this may only expedite the collapse of trust in the voting process.

“I think it’s tragic we have to deal with these shenanigans locally.”

The firs-term Councilman, responding to GV Wire, said his opponents could deal with him directly on the issue or visit the rally.

Hoping to rally Hmong voters, a notoriously finicky and low-turnout voter bloc, Mouanoutoua is bringing out a number of big names (beyond raffles) to get-out-the-vote.