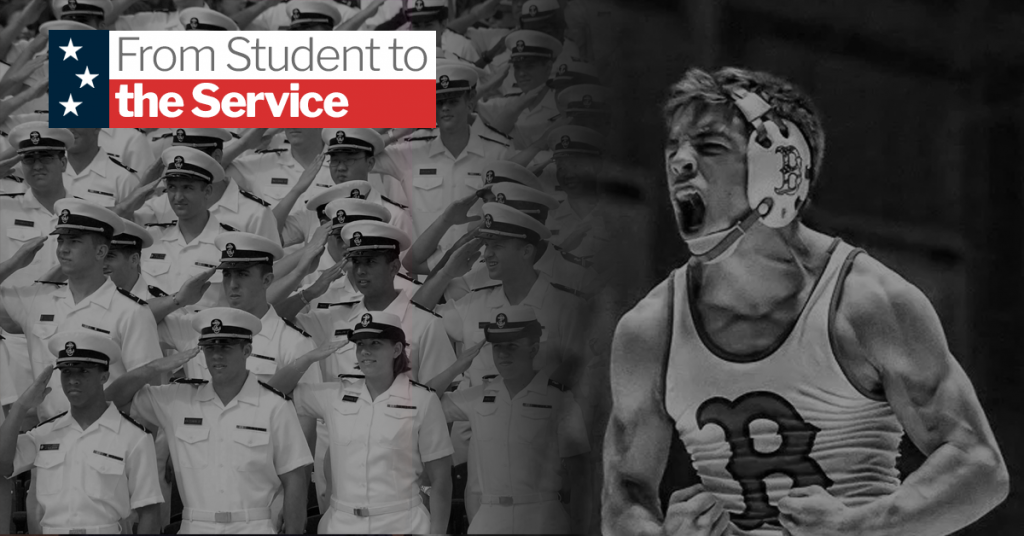 Two Buchanan High School wrestlers are set to join opposing forces at the collegiate level but ultimately remain on the same team: the U.S. military.

Raymond Lopez and George Ruiz – two of Clovis Unified School District’s four military academy commits – will be attending and competing for the U.S. Military Academy at West Point and the U.S. Naval Academy at Annapolis, respectively.

While Lopez had uncles and older cousins serve in the Army and Marines, he will be the first in his family to attend West Point.

“Just the history,” Lopez said when asked about what drew him to West Point. “Everything as far as athletics as well, wrestling, the amount of opportunity that it has to offer to me. I think the most is setting myself apart from others. It’s a very tough school.”

Lopez said he always knew it was an honor to serve in the military and thought it was something that he would like to do, but it became a reality in his junior year at Buchanan when he started connecting with the coaches at West Point.

Once they wanted him to join, he set out on completing the rigorous application process, which included a nomination from Congressman Devin Nunes (R–Tulare).

Notably, though, the coronavirus pandemic actually alleviated some of the stress involved with applying.

“It was pretty intense,” Lopez said. “It took me a while going through the whole process getting the nomination, doing the physical – just a very very long process. Thankfully it was during COVID, so I think that was actually better for me because I couldn’t imagine trying to get through during the wrestling season when you’re cutting weight and everything. Luckily I was fortunate enough to have the little COVID things so I could have time to go to all the appointments and do the medical and all the other stuff.”

Lopez is thinking about studying kinesiology, and once he graduates from West Point he said he may choose to join the infantry.

When he completes his service he knows there is one thing for certain that he would like to carry through his life: wrestling.

Would Lopez want to return to Buchanan to coach?

“That would be awesome,” Lopez said. “It’s done a lot for me – amazing people here. Hopefully I could do the same for a kid that is just like me.”

The impact that Buchanan wrestling has had on Lopez has been a shared experience with Ruiz, who has been competing in the sport since fourth grade.

“Wrestling’s a huge aspect of my life, and it’s helped me to adapt and overcome in all situations,” Ruiz said. “A lot of it’s based on you. There’s no excuses, and to make sure that you’re getting things done and leading the others around you – making sure that they’re on top of their stuff, whether it be weight or even in the classroom, just make sure to check up on them and see how they’re doing.”

That wrestling mindset – which he credited Buchanan Head Coach Troy Tirapelle for instilling – has helped set him up for his commitment to serve in the Navy.

“Troy Tirapelle’s a great coach,” Ruiz said. “He’s taught me most of what I know. He’s like a second father, which has always been awesome. He’s helped me with a lot of my decisions and big life decisions.”

Originally, Lopez was thinking he might go on to wrestle at Stanford. He had been talking with the coaches there – including Troy Tirapelle’s brother Alex Tirapelle – about joining the program, which led him to think a scholarship offer could be on the way.

But then Stanford shocked the collegiate athletics landscape by cutting 11 sports, including wrestling, amid the COVID-19 pandemic in July 2020 due to financial challenges.

The university reversed course on Tuesday and decided to keep all of the programs intact, but that was long after Ruiz made his decision to serve.

And when the Naval Academy initially became an option, Ruiz knew it would be a far better experience than Stanford.

“The Naval Academy, they called me one day, and I was like, ‘Holy crap, this is awesome. This is Stanford on steroids, basically.’ So it’s been a huge blessing,” Ruiz said.

The Academy’s calling also allowed him to follow in his grandfathers and uncles in military service, which Ruiz called a “privilege.”

“It’s always been a dream of mine to serve in the military, but it’s just something that I kind of pushed down because I never really thought about it,” Ruiz said. “My parents were always scared, so it almost seemed like an option that I shouldn’t have, but definitely one of the decisions that came into it was the wrestling program. They have an awesome coach, and he asked me one day if I was interested. To me that was all my dreams – wrestling and going into the military. Heck yeah, let’s do it.”

Just like Lopez, the extra time that he had due to the pandemic ended up being a blessing as he navigated through the application process.

He particularly enjoyed going through the nomination process with Nunes’ committee because it gave him a chance to talk to veterans and answer questions about his desire to serve.

Once he graduates and gets that opportunity to serve, Ruiz could see himself as a pilot.

“I’m more interested in helicopters than jets, so we’ll see wherever that takes me,” Ruiz said.

Whether or not he ends up flying helicopters, he is committed from the start to putting in 20 years with the Navy, which takes him back to the wrestling mindset he learned at Buchanan.

“Just like Troy says, you’re either all in or you’re all out,” Ruiz said. “There’s no going half way, and to me that’s been my whole life, so I might as well throw my whole life into it and not have any doubts.”

While Ruiz won’t face Lopez on the wrestling mat in a the highly-anticipated Army-Navy tilt because they are in different weight classes, Ruiz made clear that despite their place in rival academies, “It will always be love. He’s a brother to me.”