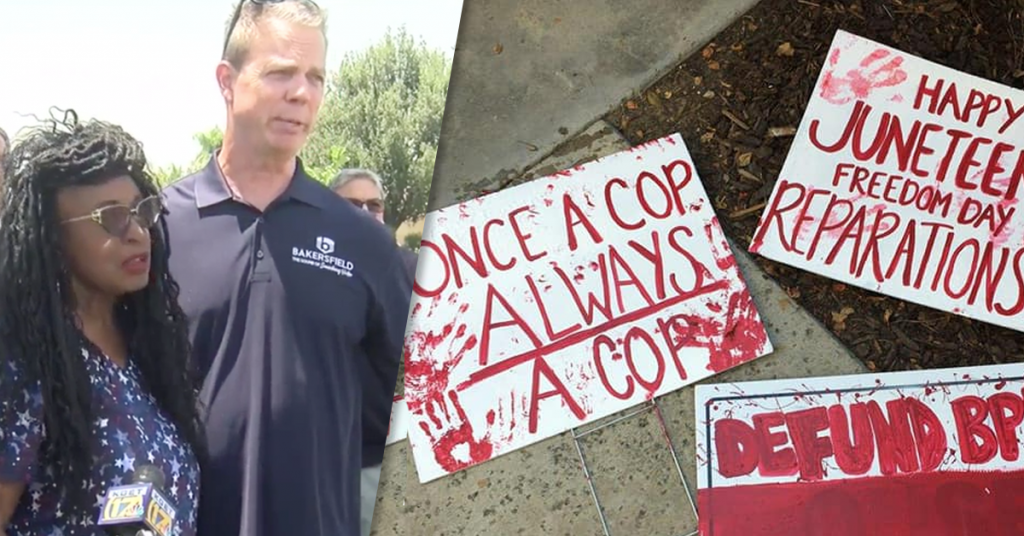 Shortly after the Bakersfield City Council approved a $683 million budget that paved the way for the hiring of 28 new sworn police officers, a group of vandals struck the home of one Council member late Friday night.

Bakersfield Council member Chris Parlier, an Air Force veteran and retired special agent with California’s Department of Justice, reported Saturday morning that vandals placing hand-painted signs on his yard reading “Defund BPD” and “Once a Cop, Always a Cop” along with red-painted handprints on his sidewalk.

Bakersfield’s budget battles, especially related to its police department, ran so hot that Mayor Karen Goh evacuated the Council Chambers last week and only allowed citizens to issue public comment one at a time with no audience.

“To the defund the police crowd: protesting in the public square is your right. Visiting and vandalizing my home is enexcusable! [sic],” he wrote. “You cannot bully and intimidate the peaceful neighborhoods of Bakersfield. There is a line between civil disobedience and vandalism. You have crossed it.”

At a press conference on Saturday, Parlier was surrounded by upset neighbors over the crossed line of public debate.

“To me, this isn’t about politics. This is about intimidation,” he said. “And if you’re not good with what happened at the Capitol, you shouldn’t be good with this either.”

Officials with an activist group leading the charge to defund the police declined media requests for interviews following the vandalism of Parlier’s home, citing a generalized press release of disappointment and calling for boycott of businesses affiliated with all seven members of the Bakersfield City Council (due to the unanimous budget vote).

It’s not the first time that left-wing activists have taken protests to the front door of elected officials in Kern County.