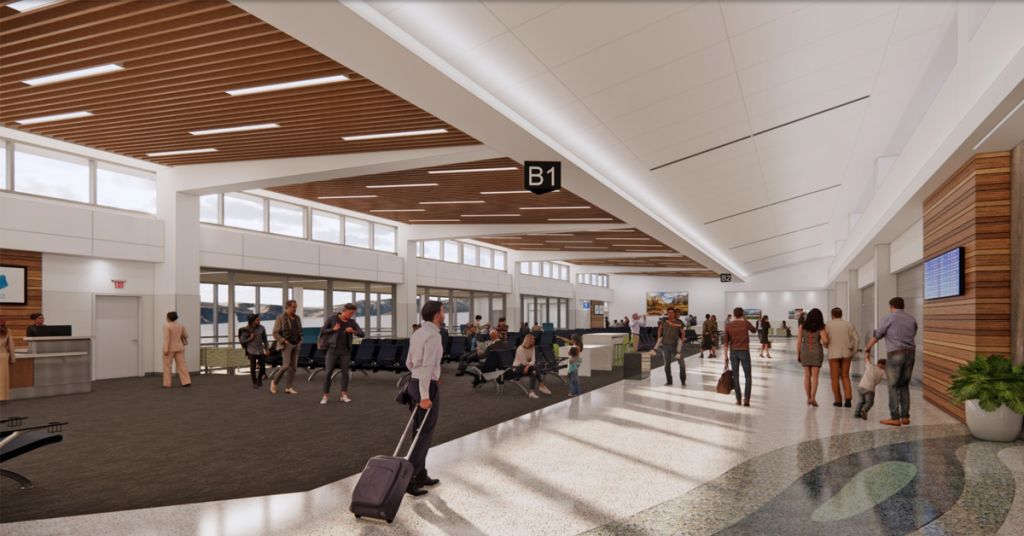 With Fresno-Yosemite International Airport completing its first major construction project in more than a decade, airport officials are seizing on the boost in travel demand to make more upgrades.

The airport is currently on the verge of completing a sizable, multi-tiered parking garage to handle increased park-and-fly traffic. With a groundbreaking last September, officials are expecting the project to be completed this month – ahead of schedule and on-budget.

Fresno has added additional economy parking spots to accommodate the loss of real estate while the garage was under construction.

However, airports director Kevin Meikle has repeatedly warned that Fresno-Yosemite’s parking capacity will be stretched even after cars begin parking in the garage.

But an expansion to the almost-complete garage isn’t at the top of mind for airport planners. Instead, they’re wasting little time moving to expand to other facilities – starting with the air terminal.

Officials released the first renderings of the expanded Fresno-Yosemite International Airport terminal, designed to enable continued expansion in the hopes of greater flight offerings in the coming years.

Construction on the terminal expansion to begin next spring with a completion date of Fall 2024.

Included in the expansion is a new U.S. Customs and Border Patrol International Arrivals facility utilizing the current international departures and arrivals wing.

But the most noticeable for domestic travelers is an expanded Transportation Security Administration checkpoint. The expanded TSA footprint, dubbed the East Wing, Fresno-Yosemite will feature an upper level concourse to aid additional flights.

The upper concourse is also designed for progressive building, enabling airport officials to commence an expansion onto the concourse to add new gates.

Expansion comes amid a decade of exponential flight growth

With initial data in, Fresno’s airport firmly returned to pre-pandemic levels May, with 91,202 total passengers passing through gates to fly from Fresno-Yosemite International.

That figure peaked in July, with 116,498 passengers departing Fresno on domestic and international flights amid one of the hottest summer travel seasons in recent memory.

The summer flurry enhances Fresno-Yosemite International Airport’s likely historic travel year, with nearly 600,000 travelers embarking or arriving from the airport since the start of 2021.

That seven-month 2021 travel figure matches the annual travel pace for Fresno’s airport a decade ago.

Who’s paying for the expansion?

In total, the terminal expansion project is tabbed at $100.73 million.

The airport, unlike other government departments under the City of Fresno, which does not utilize Fresno’s general tax revenues to fund its operations.

For this project, airport officials are culling together funding via $61.6 million in bond proceeds and amalgamated grants, a $19.5 million grant from the TSA, two additional grants from the Federal Aviation Administration totaling $7.44 million, $6 million from Fresno County’s Measure C, and $6 million from passenger charges.