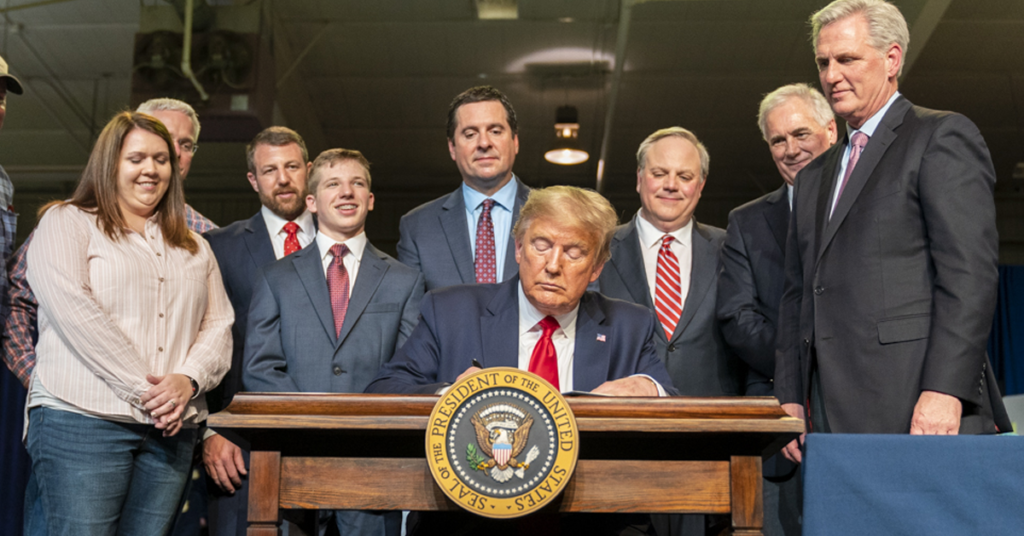 Flanked by three Valley members of Congress, President Donald Trump signed off on a memorandum charting a new path on California’s water on Wednesday.

Yet the major consequential move long-sought by Reps. Devin Nunes (R–Tulare) and Kevin McCarthy (R–Bakersfield) was not spelled out on the paper signed by Trump on Wednesday.

That move? It’s the issuance of a record of decision to adopt new biological opinions that govern the operations of the Federally-managed Central Valley Project.

The record of decision is a formal process to codify the environmental guidelines that shape how the Bureau of Reclamation will send water through the Sacramento-San Joaquin Delta.

In a weird, bureaucratic twist, that record of decision was signed on Tuesday by officials with the Bureau of Reclamation in a private ceremony following a water forum featuring Interior Secretary David Bernhardt and Nunes, sources told The Sun.

Under the newly-adopted biological opinions, Valley farmers are expected to see a boost in water flowing south from the Delta due to a switch in methods for operating water pumps.

Under the biological opinions issued in 2008 and 2009, Federal water managers were required to stick to a rigid schedule to pump water south in an effort to avoid endangering fish species in the Delta.

The new guidelines provide water managers with Reclamation and the U.S. Fish and Wildlife Service the autonomy to engage in real-time monitoring of Delta conditions to direct pumping water to Valley communities.

Aside from sending potentially hundreds of thousands of acre-feet of water to Valley farms, generating untold millions or billions in agricultural production, the record of decision does have a concrete price tag for taxpayers: $1.5 billion to support threatened and endangered species in the Delta during the next decade.

So what does Trump’s memorandum do?

The memorandum piggybacks on comments made by Bernhardt on Tuesday in Tulare – that the updated biological opinions serve as a launchpad for the Trump administration’s work on water in California.

“This is a good first step, but I believe more can be done,” Trump’s memorandum states of Tuesday’s adoption of the biological opinions and plan of operations.

Bernhardt, at the forum on Tuesday, focused his comments about developing the biological opinions as a process of Trump “setting a target” and the Departments of Interior and Commerce “hitting that target.”

“If you don’t hit the targets, you won’t be a cabinet secretary for long,” Bernhardt joked to the crowd.

The new memorandum resets the Federal target sheet, so to speak.

Instead of changing policy to increase the flow of water to Valley communities, as was achieved under a 2018 memorandum to expedite the issuance of new biological opinions, the memorandum issued Wednesday focuses on other key priorities spelled out in the Water Infrastructure Improvements for the Nation (WIIN) Act of 2016.

That law, passed in the waning days of the Obama administration, set into motion the new biological opinions, but also laid out other key priorities for California’s water needs.

Trump pointed out two key facts during his address Wednesday that stand out and dovetail into the memo’s targets.

First, that California has not built a single new water storage project since 1979.

And second, that his administration established a two-year time limit on environmental reviews on projects, including improvements to the subsidence-damaged Friant-Kern Canal.