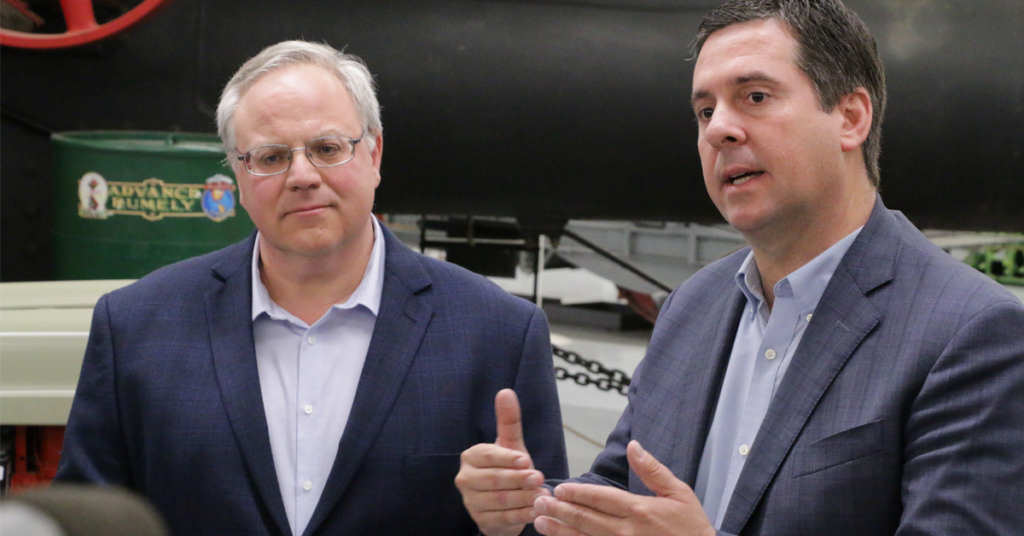 TULARE, CALIF. – The era of insanity at the Interior Department is over, so said U.S. Interior Secretary David Bernhardt here on Tuesday.

Bernhardt’s visit, and one by President Donald Trump in Bakersfield on Wednesday, serve as a one-two punch to reset the equation on Central California’s water.

Driving it all: the Trump administration’s recently-released biological opinions – or legal guidelines determining the flow of water through the Sacramento-San Joaquin Delta via the Federally-operated Central Valley Project.

Before Nunes was known for rooting out corruption on the House Intelligence Committee, he was waging a nonstop battle to send additional water south from the Delta to starved Valley farms.

Much of his ire – shared by Valley water agencies and farmers – was directed at the Central Valley Project biological opinions issued, by court order, more than a decade ago that restricted water flows to the San Joaquin Valley in years dry and wet.

Prior to taking questions from the 600 attendees, Bernhardt walked through development of the biological opinions – initiated by a 2016 law approved in the waning days of the Obama administration and expedited by a 2018 memorandum signed by Trump.

The effort was, ultimately, led by U.S. Fish and Wildlife regional director Paul Souza. The Interior Secretary took a pause to emphasize Souza’s role in the process.

“That’s probably one of our best decisions in government,” Bernhardt said of the decision to tap him to lead the multi-agency overhaul.

“He’s taken some heat and been unfairly criticized… he epitomizes what the senior executive service is about: it’s about working with the facts and the law and trying to faithfully execute the law subject to those facts.”

Bernhardt mused about a cost analysis conducted by the Bureau of Reclamation, finding that the direct costs of the 2008/2009 biological opinions led to taxpayers and ratepayers paying more than $100,000 per salmon in Valley waterways.

“We’re eliminating the need for insanity and moving forward toward the need for common sense,” he said to applause.

An uneasy relationship with California

During his overview of the development of the new opinions, Bernhardt underscored the level of collaboration between on-the-ground operators.

He added that Interior and Commerce, the two Federal agencies tasked with crafting the guidelines, worked with the California Department of Water Resources and local public water agencies throughout early stages of developing the opinions.

“We will be utilizing the best science that was developed by [State of California] folks and our folks,” Bernhardt noted. “And we will be able – legally – to be much more efficient in these operations.”

Despite the ground-level collaboration, it didn’t take long for the looming presence of Gov. Gavin Newsom to make its way.

Shortly after the Feds released their opinions, Newsom’s administration announced it would be pursuing a lawsuit to block implementation of the biological opinions.

Bernhardt iterated that he was optimistic that the Newsom administration wouldn’t initiate the suit.

“If I were [Newsom and his team], before I would [launch a suit], I would read the opinions – I’d read them personally,” Bernhardt said of Newsom and his administration. “Because if he does that he’ll find out that these are grounded in reliable science, that they were well thought out.

“I honestly think that translates to another reality: that they’re likely to be defensible.

He also issued a veiled warning to Newsom.

“Would a rational personal want to jeopardize the water supply for 25 million people without being really confident about what they read?” Bernhardt asked rhetorically.

That wasn’t the only recourse undertaken by Team Newsom, however, as they unveiled a plan – utilizing similar language to the new biological opinions to announce restricted water flows into the San Joaquin Valley via the State Water Project, setting up a reckoning on the fragile management of the Delta.

In conversation with The Sun, Bernhardt said that Reclamation and California’s Department of Water Resources had long-standing collaboration over managing the Delta.

“Any action to say ‘Hey, we’re not going to engage in coordinated operations anymore’ has consequences,” he said of Newsom’s proposed plan. “If I was sitting in the shoes of a person in that position I would want to fully understand the consequences of that before I pulled the trigger

“Because there’s no putting that genie back in the bottle,” he added.

Battle on the Hill

At the top of mind for some attendees was last week’s news that the House Natural Resources Committee voted to grant its chairman Rep. Raul Grijalva (D–Ariz.) subpoena power to investigate Interior and other departments.

It put two committee Democrats – Reps. Jim Costa (D–Fresno) and TJ Cox (D–Fresno) in an odd position of voting to investigate and potentially nullify a plan that would send more water to their districts. They both voted to grant the investigatory powers.

During the forum, Bernhardt noted that the Department of Interior sent the House Natural Resources Committee “boxes upon boxes” of documents related to the Central Valley Project and the issuance of new biological opinions, including thousands of pages of email correspondence.

He then issued a challenge to the audience.

Later, in conversation, Bernhardt reiterated that Interior was committed to providing relevant information upon Congressional request.

“I fundamentally believe that Members of Congress should get the information that they need to help them do the job – we’ll give them that. If we decide that we can’t do that, I promise you there’s a reason and it’s a reason that I find pretty defensible.”

Throughout the sit-down on Tuesday, Bernhardt and Nunes provided slight hints as to the agenda for Wednesday’s Bakersfield confab with President Trump.

More than a few eyes lit up by one line from Bernhardt.

“I think you’re gonna find out tomorrow, the President doesn’t think you’re done yet. That said, [the biological opinions] is step number one in terms of creating some room to run.”