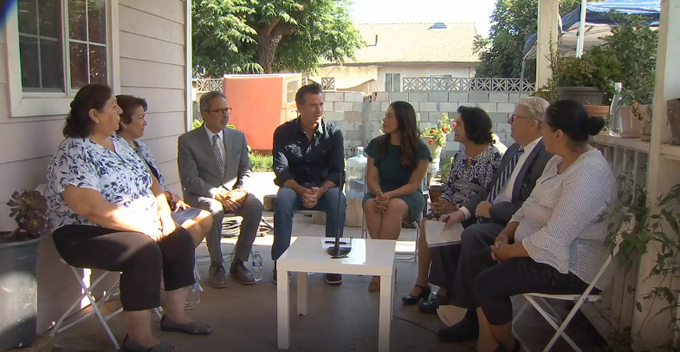 During a swing through the San Joaquin Valley, Gov. Gavin Newsom visited the Tombstone neighborhood outside of Sanger to sign a bill that will fund clean drinking water infrastructure for rural California communities.

State lawmakers struck an agreement during budget negotiations to fund the bill by utilizing some of the state’s General Fund. The vast majority of funding, however, came via tapping the state’s greenhouse gas reduction fund, a pool of money from cap-and-trade carbon credit sales.

Following the bill signing, Newsom headed to McKittrick in Kern County to evaluate the 800,000-gallon oil spill caused at a Chevron well in the town.

Ahead of his bill signing, Newsom visited Coalinga on Tuesday night for a fundraiser at Harris Ranch.

The fundraiser, hosted by California Cattlemen’s Association and Western United Dairies for the Governor, focused considerable attention to water issues – including much-needed above-ground storage like the proposed Temperance Flat Dam.

“That’s created a lot of frustration. Trust me, I heard it last night,” Newsom told GVWire of the California Water Commission’s decision last year to grant only 17% of the $1 billion requested to construct the dam.