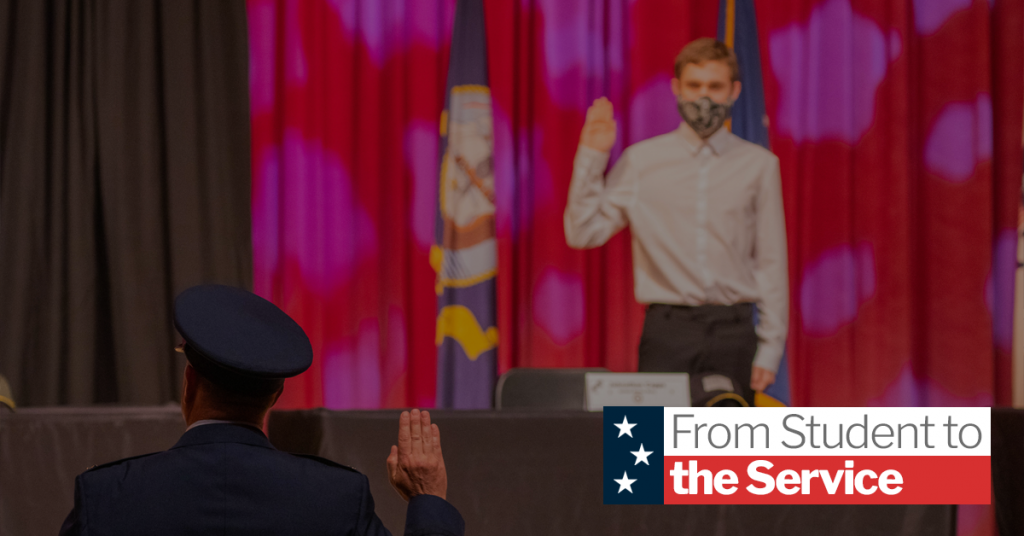 Clovis Unified School District continued its military festivities Monday, honoring the students from Clovis High School and Clovis North High School who have chosen to commit their future in service of the nation’s armed forces.

Buchanan started the now district-wide event in 2019, with the other four high schools holding their first annual ceremonies this month.

“And also know that there will be future generations, those yet to even be born, who will someday thank you. Students, be safe, remember where you come from, and know you will always be in our hearts and prayers.”

Colonel John Lundolm – the Commander of the 144th Maintenance Group with the 144th Fighter wing at Fresno’s Air National Guard base – administered the military oath for the students at both schools.

The commitment ceremonies – not all that different from National Signing Day for soon-to-be collegiate athletics – were held in conjunction with the Clovis Veterans Memorial District.

Veterans who are members of the Memorial District, as well as several active service members, were also on hand to congratulate the students that are following in their footsteps.

At Clovis High School, Lorenzo Rios, the CEO of the Memorial District, spoke to the commits about the responsibilities they are taking on in defending valued American freedoms.

“This nation provides us so many freedoms, that sometimes we take them for granted. It’s easy to throw rocks at a great nation that at its principle says that we come together to form a more perfect union. It’s the responsibility of every generation to do their part to protect and defend this idea called America, where everyone has the freedom to pursue those things that would inspire and aspire for happiness and leverage the talents that God provides them,” Rios said.

“Not their government, but God. But you can’t have it without having someone stand up and provide that blanket of security that gives us the space to exercise that kind of dialogue.”

Rios spoke to the students at Clovis North about the impact that their decision to serve will have on the rest of their life.

“The adventure you’re about to embark in is one that is life changing,” Rios said. “You will interact with some of the greatest people you’ll ever work with. Diversity is not what we talk about there, it’s something that you will live – diversity of ideas, diversity of different walks of life. The one thing that they all have in common is this belief that this great nation is worth defending, and thank you for answering that call.”

Clovis North Principal Joshua Shapiro honored his students for their commitment to serve, which relates to his own family.

“My father was a veteran in Vietnam, received a purple heart. One of the things he talks about the most in his life is not his professional accomplishments, but the time he served in the Marines,” Shapiro said. “I just want to thank you for your future service. I have nothing but the utmost respect for you and excited that today we celebrate you and your family.”

The students all had an opportunity to thank their families for their support in their choice to serve the military.

Ryan Franco, who will attend West Point on a wrestling scholarship, reflected on the opportunity presented Monday to give military commits the honor and recognition that they deserve in a similar fashion that the student-athletes receive.

“Most of these people wouldn’t have gotten recognized without this, so I think it’s pretty cool that they had this,” Franco said.

Here is a list of the students from Clovis High and Clovis North who will be serving in the military:

Monday’s military signing day ceremonies were the third and fourth for the district over the past couple of weeks.

Clovis East High School honored its seniors heading into service on May 4, and Buchanan High School – which started this tradition – held its event last week.