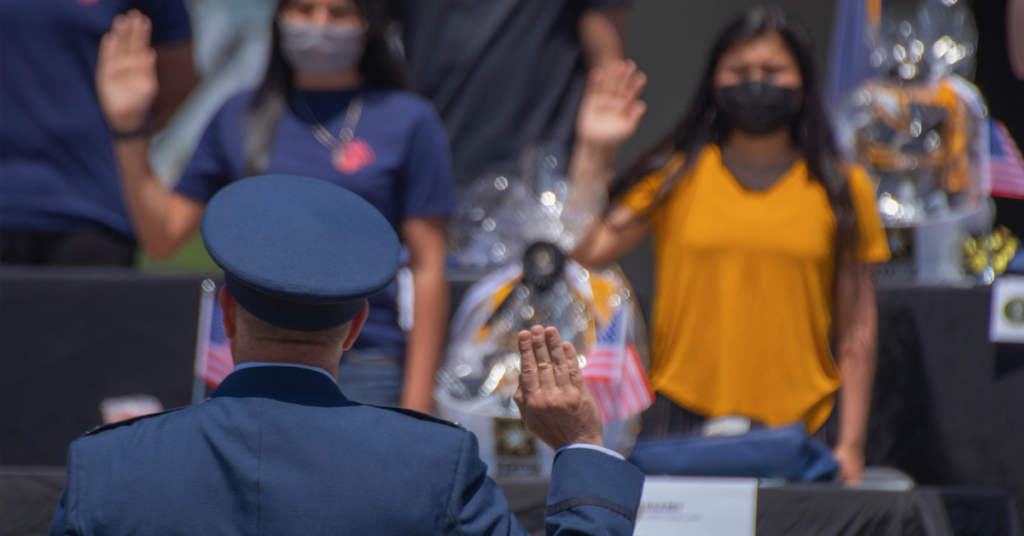 With all the fanfare usually surrounding National Signing Day for high school athletes, Buchanan High School held a military signing day Wednesday, honoring the 10 seniors who have committed to the U.S. military after graduation.

This was the second such ceremony for Clovis Unified School District this month. On May 4 Clovis East High School celebrated 19 students that have chosen to commit to the military. The other three CUSD high schools are following with ceremonies of their own later in the month.

“Tonight is a very special evening for us,” Buchanan Principal Joe Aiello said. “We have 10 students that have made the choice to serve our country and fight for our freedoms, and we’re very excited to give them a proper ceremony and celebrate all they’re going to be doing in the future and for us. We are very grateful for not only the sacrifices from our students, but from their families.”

Buchanan started the new Clovis Unified tradition in 2019, when it congratulated 13 students for their military commitments. The event could not be held last year due to the COVID-19 pandemic.

Aiello said the theme for this year’s ceremony was the acknowledgement of sacrifice, and the administrative team at Buchanan is very proud of the students who have chosen to serve the country and fight for “all the freedoms we enjoy every day.”

“We understand our 10 students are making an incredible sacrifice,” Aiello said. “They’re giving up opportunities away from their family to go and fight and serve for something we all really believe in. But at the same time we know that they’re not the only ones sacrificing. You parents, we appreciate your sacrifice.”

The students were given the opportunity to introduce themselves and recognize their family members that were present.

“I chose specifically to serve as a way to use my God-given talents as a way to protect this country that’s given me so many amazing opportunities and memories, and I’ve chosen the Marine Corps specifically due to the camaraderie and the challenge that I know is going to be ahead of me and is going to help me grow as a person and as a leader in the future,” said Christian Navarrette, a Marine Corps enlistee.

Navy recruit Troy Foster had a similar reason to join the military.

“I chose to serve because I absolutely love our country and believe that this is the best country on planet Earth,” Foster said.

For others like Navy enlistee Benjamin Waddill, serving in the military is a way to fulfill a lifelong dream.

“I’m going into the Navy, the reason why is because I’ve always had a childhood dream of working on submarines, so I’m hoping to fulfill that,” Waddill said.

After the introductions, Colonel John Lundholm – Commander of the 144th Maintenance Group, 144th Fighter Wing, at the California Air National base in Fresno – led the recruits in their military oath.

Lorenzo Rios, the chief executive of the Clovis Veterans Memorial District, closed out the ceremony with a message to the students.

Here are the students and the military branches they are joining: