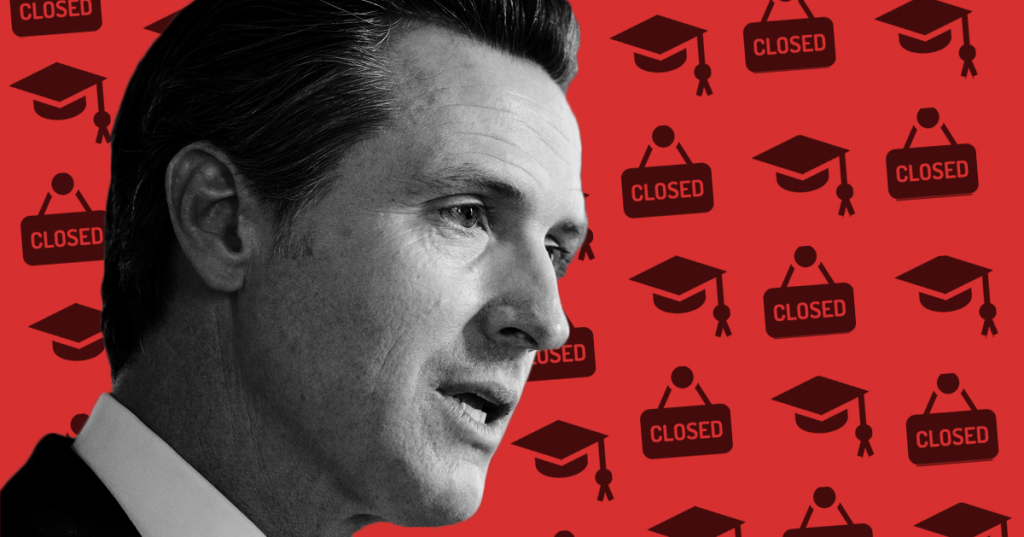 Months of word salad from the lectern at California’s Office of Emergency Services has finally given way to refreshing clarity and candidness from the Golden State’s chief executive.

Except it wasn’t during Gov. Gavin Newsom’s infamous “Newsom at Noon” coronavirus briefings.

Speaking to the Association of California School Administrators, Newsom expressed his exasperation with the stalemate of reopening the state’s public schools.

A laundry list of demands from the California Teacher’s Association, gun-shy school administrators, and tepid interest from local public health officials in California’s 58 counties have left California parents growing increasingly irate with the state of affairs at their Zoom-replacement school scheme.

Irked, Newsom leveled with onlookers during a live stream by the organization representing the state’s school superintendents and management.

“If we wait for the perfect, we might as well just pack it up and just be honest with folks that we’re not going to open for in-person instruction this school year,” he said.

“You find whatever you look for. If we want to find reasons not to open, we’ll find plenty of reasons,” he said. “If we want to start building on ways to strategize to find ways to getting where we all want to go, we’ll figure that out as well.”

“If everybody has to be vaccinated, we might as well just tell people the truth: there will be no in-person instruction in the state of California. Just tell them the truth. Don’t mislead people,” he added.

“If vaccinations is the absolute, then maybe we should be having a different conversation with the people of the state of California and parents.”

Meanwhile, the state-by-state tenor shift amid the takeover of the Biden administration had Newsom worried about a “Keeping Up with the Nevadas” situation.

“I can assure you, the pressure we’re getting today is going to pale in comparison to where we’ll be in a few weeks if these numbers continue and other districts across the country start moving in the direction that the new administration wants them to move in,” he said.

Arriving amid U.S. Centers for Disease Control findings that reopening schools can be carried out safely with scant spread of coronavirus, the comments echo what school administrators have heard for months from disgruntled parents.

But now it’s not just parents saying it, it’s the Governor of America’s most populous state – empowered with a vast set of carrots and sticks at his disposal to make it happen.

The problem? The association hid the video of Newsom’s candor.

Why? The theories are endless.

But suffice it to say, the irritant is there. The frustration is palpable. The political implications are at Newsom’s doorstep like a high tide.

And yet, Californians can’t fully share in Newsom’s ire because we haven’t even seen it.

Unlike his predecessor, Newsom has perhaps the most important perspective on this issue. He’s the father of four children all at elementary school ages or younger – albeit in private schools.

In his speech, he acknowledged his four-year-old son is struggling to handle Zoom-based schooling.

Newsom, who has leaned heavily on the coercive power of government to shutter and reopen restaurants, bars, hair and nail salons won’t use those same levers of power to open the schoolhouse door.

California’s education infrastructure, it appears, can only be handled with a velvet touch. In short: all carrot, no stick.

29 days into the new year, the carrots – clearly – aren’t enough for school administrators and teachers unions in California.

What California likely needs is what has been missing all along.

And his inability to be an plain dealer with all Californians is what has made Newsomese a frustrating second language for Golden State denizens to hear.

So while California students are unable to recall the material they learned last Tuesday from a Zoom session, Californians march ever closer to recalling their own Governor.