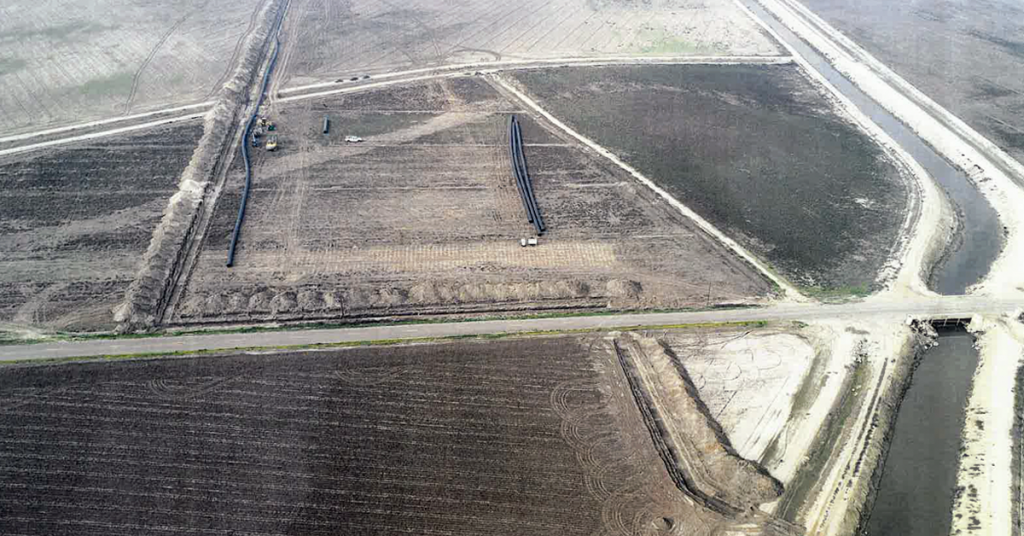 A massive water pipeline being laid in southern Kings County is sparking fresh fights between local farmers and the county’s biggest player in the water industry.

Wednesday, the Tulare Lake Canal Company, which operates the eponymous canal, sued Sandridge Partners, the diversified farming and water giant owned by John Vidovich, alleging Vidovich’s pipeline will interfere with its property rights and damage its ability to deliver water to its users.

Tulare Lake Canal holds dominant rights of way over its canal space and some adjacent property.

In late December, Sandridge’s Vidovich claimed that the several lines of the pipeline were going into the ground, some for the company and others for Tulare Lake Reclamation District 761 – a water district controlled by his firm.

In the suit, the Canal Company alleges it first became aware of Sandridge’s intent to install the pipeline under its canal in mid-November, crossing an easement held by the Canal Company. Two weeks ago, Tulare Lake Canal contacted Sandridge to strike a “common use agreement” for a right of way east of Ave 20 1/2, the complaint alleges.

The Canal Company claimed it learned of additional trenching activity occurring across land owned by Sandridge and Roller Land Company from the Blakely Canal near Highway 41 south of the community of Stratford.

In the complaint, the Canal Company claimed that Sandridge representatives wrote that they had no intention of insuring the canal against damages nor would confirm that the pipeline would interfere with the Canal Company’s use of the canal.

Two days later, Tulare Lake Canal pressed Sandridge to halt construction until they could reach an agreement for use of the land and demanded assurances that construction would cease.

They received no such assurances, they write in the complaint.

“Tulare Lake Canal is informed by Sandridge itself and believes to be true that work will proceed on the pipeline, cutting a gouge out of and through the Canal,” the complaint reads.

“The trenching perpendicular to the Canal for purposes of installing a pipeline under the Canal will make use of it impossible for deliveries of water while that trench gouges entire sections of the Canal berm and channel,” the complaint reads.

“Should the installation, operation, or maintenance of the pipeline be delayed, resulting in an interruption of the water deliveries to its users, Tulare Lake Canal would be subject to a multiplicity of actions for damages due to reduced production yields and other damages by agricultural water users.”

The canal operator added that future issues related to the operation and maintenance of the pipeline could threaten future water deliveries through the canal.

The Canal Company demanding a judge issue a permanent injunction to halt construction along with a writ of mandate that Sandridge secure $5 million in casualty insurance while holding the Canal Company harmless for the installation, operation, and maintenance of the pipeline.

Thursday, one day after the suit was filed, Kings County Sheriff’s deputies were dispatched to the construction site over concerns related to potential interference on other rights of way held by the County of Kings, sources told The Sun.

What’s going in the pipes AND TO ?

Vidovich, speaking to SJV Water, was coy and not willing to elaborate on the type of water being moved through the various piping going underground.

While some observers point to the fact that it appears to be moving groundwater, it is exceedingly close to a number of surface water outlets – including the canal.

If it were to tap into any of them, it would move governance of the water into the jurisdiction of the Kings River Water Association.

The other issue: where is the water headed?

That question comes with increased importance given who is constructing the pipeline.

Vidovich has long been viewed with suspicion in the south Valley after he agreed to deal the annual rights to 14,000 acrefeet of water belonging to properties sitting within Kings-based Dudley Ridge Water District for $73 million in 2009.

The water was then shipped to Mojave Water Agency in southern California.

That sale cascaded into a different controversy for the Santa Clara County lawyer-turned-water maven.

Vidovich turned his gain from the water sale to Mojave into an almost outright acquisition of land in the Angiola Water District in Tulare County.

The construction of the pipeline forced the irrigation district’s hand, launching a lawsuit to halt Angiola’s groundwater exports – at one point to the tune of 30,000 acre-feet annually – out of Tulare County into Kings and possibly Kern counties, in violation of Tulare County ordinances .

While Tulare County prohibits the export of groundwater, Kings County has no such prohibition, increasing worry over the construction of the new Sandridge-led pipeline over its potential to stretch into far-flung locales beyond the county line.