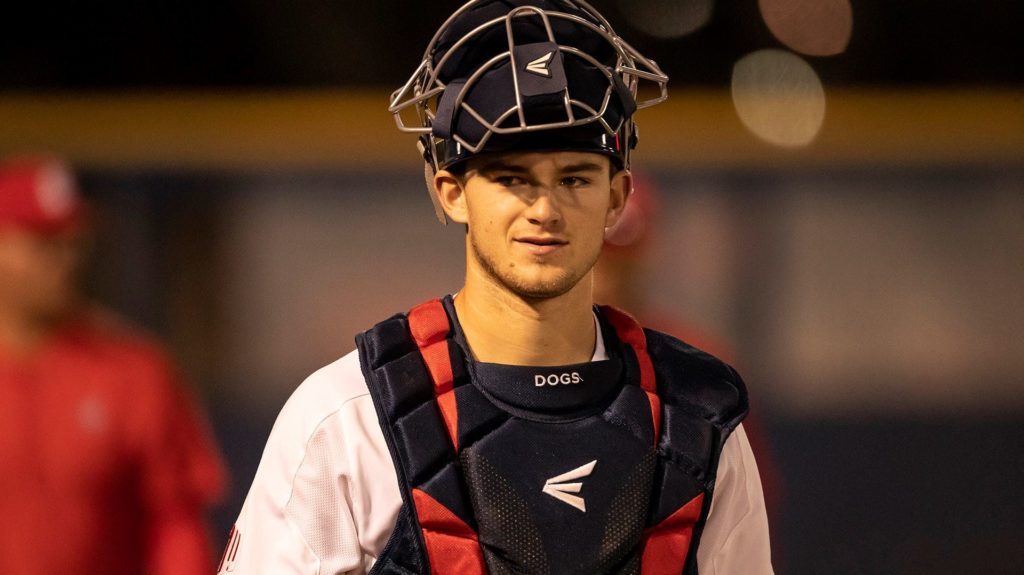 After splitting the first two games over the weekend with UC Irvine, the Fresno State baseball team struggled out of the gate and fell behind early. But the Bulldogs never gave up and fought their way to a comeback 12-10 victory on Sunday to finish out the series.

“It was up and down all game,” said junior catcher Zach Presno. “For a little bit there, obviously a lot of guys are down, not a lot of energy. But then we just had our veteran hitters and our young guys come through at-bat after-at bat.

“Nobody gave up. Everybody went up there with confidence. It’s just the true Bulldog in us. A bunch of young guys, we’re going to make mistakes. We’re going to stick with it and keep grinding out at-bats.”

Freshman Jake Harrell, a lefty out of Sanger High School, got the start and took the mound for the first time for the Bulldogs.

Unfortunately for him, the defense behind him made some early mistakes even though the Anteaters didn’t have solid contact on too many of his pitches. The Bulldogs committed a throwing error over first baseman Zach Morgan on the first play of the game and a followed that up in the third inning with another off the mark throw to Morgan.

Add those errors to a couple misplayed balls and excellent baserunning from the Anteaters, and Harrell didn’t stand much of a chance.

“Kicking the ball around behind Harrell, and he’s out there fighting every pitch for every out and every one of those ended up mattering just as much as the last couple,” said head coach Mike batesole. “He shouldn’t be out there, but he took the ball, and he towed the rubber and all kinds of stuff was happening behind him.

“ He just kept pitching. I was very very proud of how he handled all of that. That gave us a chance to just keep fighting. You see a kid out there doing what he was doing, if that doesn’t inspire you.”

Freshman Julian Sotelo relieved Harrell after one out in the second and pitched through the fourth, not allowing any runs.

Alex Kendrick, another freshman, followed Sotelo and locked down the Anteaters for three more scoreless innings.

Fresno State cut the deficit to 9-6 in the seventh inning off a Morgan single to right-center that scored Nate Thimjon and Nick Berry.

UC Irvine answered back with a run of their own in the eighth, but then the tide changed for the ‘Dogs.

Fresno State exploded in the bottom of the eighth for 6 runs. Miles Tomczak drew a leadoff-walk, Berry hit him in with a single and Thimjon hit a fly ball home run to right field to knock in 2 runs and bring the Bulldogs within one.

Ryan Higgins came up and doubled to right field, which set the stage for Presno, who hit two home runs in Saturday’s loss.

Presno drew a 3-1 count and blasted a home run along the right field line to give the Bulldogs the lead.

“That was fun,” Presno said. “Nate came through. Higgy came up – all those guys at the top of the lineup just doing their part. Nobody’s trying to do too much, and everybody’s just leading the team one at-bat at a time. That was a blast.”

Sophomore pitcher Kevin Larson – who gave up one run in the eighth inning – came back out for the ninth and closed out the game to seal the comeback win.

“That was huge,” Presno said. “That’s a huge confidence booster for our team, especially our young guys to see how – the celebration, that feeling. You crave that feeling from now on, and to start off with a win, that’s absolutely wonderful.”

The Bulldogs improved to 2-1 as they wrapped up the first weekend of the season. They host Washington for a three-game series next weekend, starting Friday at 6:05 p.m.

“It seems like it’s just one game, but early like this, it’s a gigantic different feeling tomorrow and Tuesday coming back to practice being 2-1 instead of 1-2, especially how this game went,” Batesole said.

“If we wouldn’t have closed that out and be kicking ourselves with how we played early in the game, it’d be a whole different feel around here. It was pretty electric in the clubhouse afterwards. As high as it was, it probably would have been about that low if we didn’t finish it. So it’s bigger than just one game.”