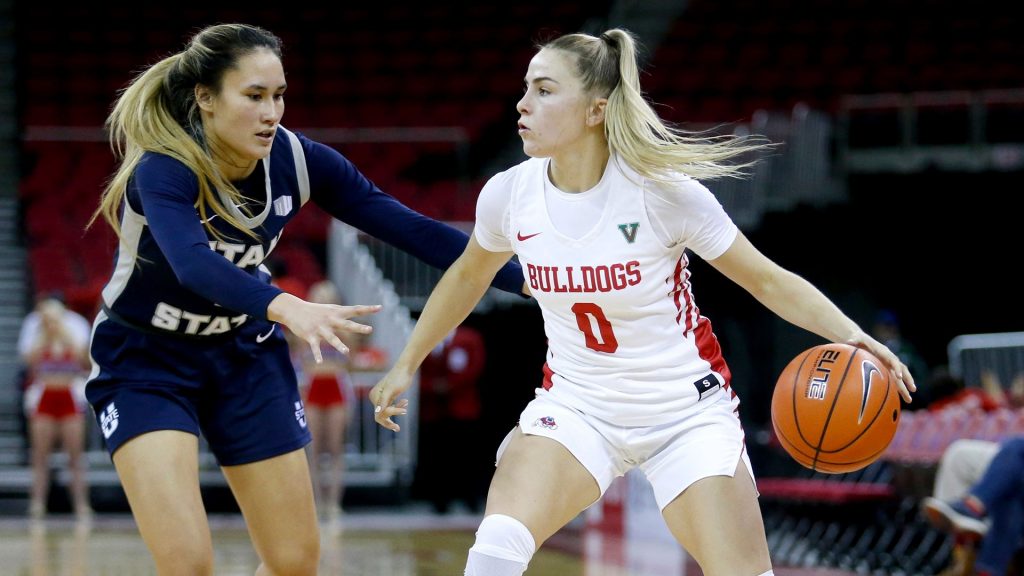 Coming off last season’s controversial loss to Boise State in the conference tournament title game, the Fresno State women’s basketball team is back in action, holding the first practices of the season this week.

The nonconference schedule has not been released yet, but the Bulldogs will open conference play with a rematch against Boise State on Dec. 31 at the Save Mart Center.

“To start with Boise, that’s fun,” said head coach Jaime White. “That’s nice that we’re able to start it at our place.”

However, before the Bulldogs work their way through the nonconference schedule to play the Broncos, they still have to grapple with the various changes caused by the COVID-19 pandemic.

Just like football, women’s basketball is undergoing coronavirus testing three times a week as well as regular temperature checks. The players wear the masks on the sidelines, but they won’t have to wear them when they play games.

“For coaches it’s not been hard at all with the masks,” White said. “I think for the players it took a little time to get used to, especially as we’re getting in shape… It also is very reassuring that we’re going in the right direction and everybody is safe. I feel like because of that, our players feel safer in practice, which is worth it, so do coaches.”

The pandemic has prevented two players from joining the team. Forward/center Wytalla Motta and center Maria Guimaraes have been stuck at home in Brazil because of travel restrictions in place due to coronavirus.

“We’re waiting for them to arrive, and we’re hoping that we can get them up to speed quickly,” White said.

Even with all the change and disruption due to the pandemic, the Bulldogs are in a very good place: All five starters return from the team that went 25-7 and were the regular season Mountain West champions.

Twin guards Haley and Hanna Cavinder starred as freshmen last year, scoring 16 and 15.7 points per game, respectively. Haley was named the Mountain West Freshman of the Year and both were selected to the all-conference team.

“We really took a hard look at what they were good at and what they could improve on, and if you’ve ever known two kids that want to improve more, they are definitely ideal with that,” White said. “They are, ‘What can I do better? Can I use my left better? How’s my three-point shot?’ So we have really challenged them with getting better in some of those areas, and they’ve come back. They were very active all summer. They had a great summer.”

Forward Maddi Utti returns for her senior season after averaging 15.9 points per game and being named as the conference Player of the Year.

With Utti and the Cavinders scoring over 15 points per game last season, Fresno State was only one of two schools in the nation to have three such players. The other school was Oregon, who had Sabrina Ionescu – the No. 1 overall pick in the WNBA Draft.

Aly Gamez returns as another starting guard, and Motta – whenever she’s allowed back into the country – will rejoin the ‘Dogs at center.

White said sophomore Brooke Walling has come back playing stronger on the inside and has built off her experience last year to play a big role at center this season.

Brown was a standout in Georgie, being named to the state’s Class AAAA all-state team all four years of high school, and Dunn is the daughter of former Fresno State football player David Dunn.

Former San Joaquin Memorial star Aunjona James should be ready to go soon too. She missed all of last season with an injury, but took a redshirt year so she still has four years of eligibility remaining.

“She’s not been cleared yet, but the reality is it’s been a good thing that we’ve had the time we have to recoup and be ready, extra ready,” White said. “I think she could be the best rebounder in the league. She is so explosive and so strong, and really works hard and has worked really hard in her recovery. So we’re really excited about her coming in too. Obviously she would have had playing time last year, so we’re excited for what she’s going to bring this year.”