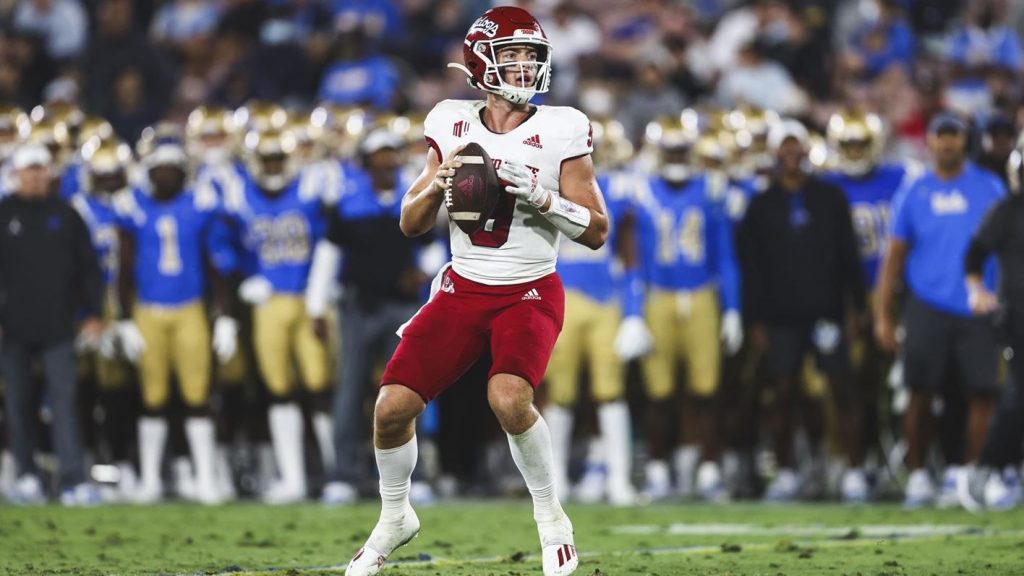 Fresno State quarterback Jake Haener caught the national spotlight for his fourth quarter heroics in the 40-37 win over UCLA last Saturday while clearly in pain.

Haener took several shots throughout the game, including one to the hip that really bothered him right before he tossed a touchdown to Erik Brooks with a few minutes remaining.

Though he was clearly injured, his number was called once again with 54 seconds left on the clock when he led the Bulldogs 75 yards down the field to reclaim the lead and seal the upset victory.

“Every time I threw the ball it was really, really bad,” Haener said Tuesday. “I was just trying to do everything I could to stay back and use my weight and try to get my arm through to make those last few throws, and you’ve obviously got adrenaline running, which definitely helps you. I was trying to do everything I could to help us and stay on the field.”

As head coach Kalen DeBoer said at his weekly press conference Monday, Haener should be good to go Friday when the ‘Dogs host UNLV in their Mountain West opener.

Haener was a full participant in practice on Tuesday and is spending extra time in the training room this week to ensure his health is not an impediment come Friday.

“We challenge them on being pros as far as they approach their work in the training room, whether they have injuries or just something that’s lingering, they’ve got to make sure they’re living in there to get their bodies refreshed and ready to go for a short week and a Friday game,” DeBoer said.

Offensive Coordinator Ryan Grubb joked Monday about Haener’s theatrics, noting that the quarterback chest bumped one of his teammates on the sideline after limping off the field.

“Taking nothing away from him, he lives for that,” Grubb said. “He loves taking [hits] in kind of a sick way – take a shot, get up and show them ‘I’ve got way more in the tank.’ Sometimes you get to coach guys that just marry up with you and your style, and I love the fight in him. I absolutely love that, and it matches my persona in just how I like to coach and how I like this offense to feel and execute, and just having a fighter at the front of that is a lot of fun.”

Much of that fighter mentality and determination was drawn out even more midway through the fourth quarter against the Bruins and may have set the tone for how Haener will be remembered as a Bulldog.

With 7:27 left in the game – after UCLA battled back to take the lead for the first time in the fourth quarter – DeBoer approached Haener on the sideline with a message.

“Coach DeBoer came up to me the last 7:27 after we gave up the lead and we had two costly fumbles there, he said, ‘You’re going to be remembered as a Bulldog by the next 7:27.’ That’s literally what he said to me,” Haener said.

“He came up to me on the sideline right before that drive and said, ‘You’re going to be remembered for the next 7:27.’ So I just kind of took that and was like I’ve got to go make plays for this team, this program, this city and do everything I can – hurt or not – and put my team in a position to win.”

However the rest of Haener’s Fresno State career goes, he will be forever remembered on the City of Fresno’s calendar.

Mayor Jerry Dyer swung by practice Tuesday to present a proclamation to Haener and the rest of the Bulldogs.

This week will be known as “Fresno State Bulldog Football and Quarterback Jake Haener Week.”

“I had no idea that was coming,” Haener said. “At the end of the day it’s about everyone and about what this team did as a program and how we were able to stick together and make it happen when our backs were up against the wall.”