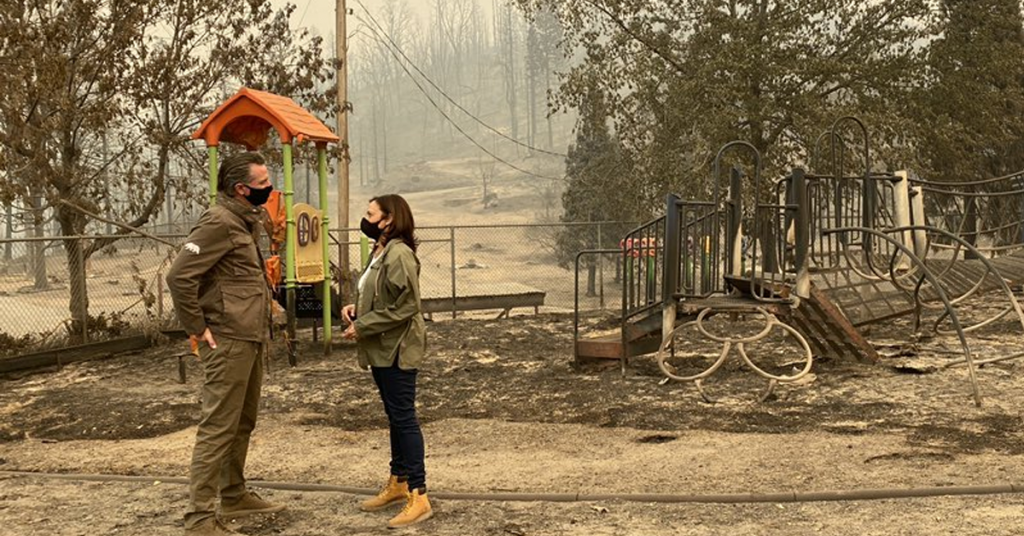 Harris and Newsom traveled to Auberry to Pine Ridge Elementary School, a rare structure still standing but in the middle of a heavily impacted area, for the briefing.

Fresno County Supervisor Nathan Magsig and County Administrative Officer Jean Rousseau were present at the briefing along with officials from the U.S. Forest Service and CAL FIRE.

Magsig told The Sun that fire officials discussed the role that state-funded fire breaks have played in keeping the Creek Fire from devastating even more land than the 220,000-plus acres already burned.

Magsig also had an opportunity to speak to Harris and Newsom at the briefing about how Fresno County is the second-most impacted county in California in tree mortality with 25 million dead trees.

“This fire of course is burning a lot of fuel which is on the forest floor, and how important it is to be actively managing our forests,” Magsig told The Sun. “We need to be doing that by controlled burning, by mechanical fitting and of course we need to get the timber industry going again in our forests.”

According to Magsig, fire officials told Harris and Newsom that the amount of fuel in front of the fire has been challenging for the firefighters, and the nature of the fire’s growth – expanding 50,000 acres in on day, jumping the San Joaquin River into Madera County and moving 15 miles in one day – has been unique and unheard of.

With Harris and Newsom listening to reports from Magsig and the fire officials about the Creek Fire and the impact of forest management, it begs the question: Will anything constructive come from Tuesday’s meeting?

Magsig is hopeful that the two Democrat leaders understood the problem and the challenges currently facing Fresno County.

“When I talked to them about the importance of actively managing our forests and reviving our timber industry, they seemed receptive to me for something like that to happen, so I’m always hopeful,” Magsig said. “At the end of the day I think it’s important for citizens to also send messages of what they want up to our policymakers so it can be very clear in our elected officials’ minds and eyes as to what they need to do, what the citizens want, and I’m confident that the citizens of Fresno County want to see their forests actively managed.”

Following the Pine Ridge briefing, Harris and Newsom toured a Creek Fire evacuation center at Granite Ridge Middle School in Clovis, where they had an opportunity to speak with Red Cross volunteers.

When they arrived at the evacuation site, the Democrat duo were met with dozens of people waving Trump flags and shouting things such as “four more years” and “recall Newsom.”

After leaving Clovis they went to Fresno Fire Station 11 and met with Fire Chief Kerri Donis and other firefighters to finish their visit in Fresno County.

Two days in, it’s been a busy week for Fresno County officials. The Harris-Newsom tandom visit comes one day after President Donald Trump jetted Air Force One into McClellan Park in Sacramento for an in-person briefing with state and local officials.

Among those in attendance: Fresno County Sheriff Margaret Mims.