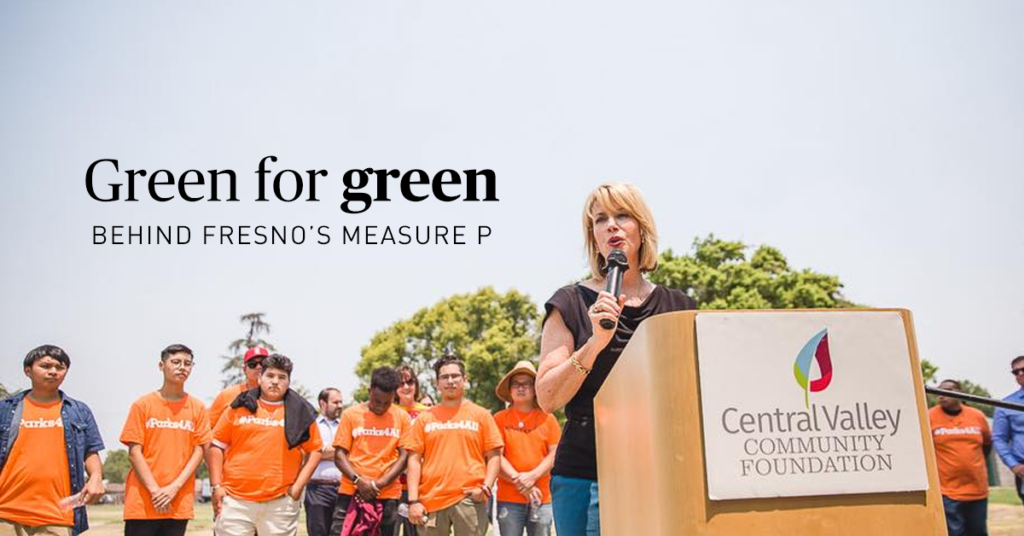 What follows is Part I of our first series: Green for green, focused on Fresno’s 2018 parks tax – Measure P.

Measure P, the 2018 failed attempt to raise taxes in Fresno in an effort to improve parks, was among the most heated and expensive political campaigns in Fresno’s history.  The story behind the coalition that created and supported Measure P, which could charitably be described as an odd combination, hasn’t been told until now.

The old adage that “politics makes strange bedfellows” was never more apparent than by the coalition of north Fresno power brokers and south Fresno activists fighting to improve Fresno’s parks.

The reality, however, is more complicated.

The genesis of Fresno’s failed 30-year, 3/8th of a cent increase in sales tax for parks, by all measures, could be identified as April 2010.

It was then that the multi-billion-dollar nonprofit California Endowment announced a 10-year initiative targeting 14 regions across California.

The Endowment focused its presence on “Central/Southwest/Southeast Fresno.” For locals, that translated to roughly anything south of Shaw Avenue, the so-called “blight line” of the city.

The Fresno BHC, headed by Sandra Celedon and overseen by former Asm. Sarah Reyes (D-Fresno), would take on a number of initiatives aimed at generally improving health care and quality of life in south Fresno.

The nonprofit developed a potent mix of public relations initiatives, such as billboards along Shaw Avenue exerting pressure on then-Fresno Unified Superintendent Michael Hanson and the school board during budget negotiations, and behind-the-scenes public affairs lobbying on key priorities.

Meanwhile other moves were even more stealthy, such as recruiting former Fresno Mayor Alan Autry to publish an Op-Ed in the Fresno Bee in 2014 calling on Fresno County to save its Medically Indigent Service Program.

In 2015, Fresno BHC and Fresno City Hall had its first public clash. The subject of the spat? A set of bus ads sponsored by BHC displaying two ZIP codes – one in north Fresno, another in south – and the amount of parks acreage in the two regions.

The Swearengin administration banned their appearance on Fresno’s FAX busses, citing a policy not to allow political advocacy on city property.

While the row over bus advertising faded, the underlying issue didn’t. Eventually, surprisingly, it would draw the two sides together.

Few Fresnans have ever heard of The Trust for Public Land.

It’s a nonprofit aiming to “create parks and protect land for people, ensuring healthy, livable communities for generations to come.” It also operates a political arm, the Trust for Public Land Action Fund.

Many, however, have heard at least a casual mention of its most successful project: the ParkScore. Often couched in headlines praising or critiquing cities across America for plentiful or scarce green space, the ParkScore is nothing if an ever-so-slight method of public policy shaming.

For Fresno, the ParkScore has held a particular sting. For many years, Fresno has served as the basement dweller in TPL’s national rankings thanks to metrics such as park acreage, facilities maintenance and funding, and “access.”

In 2019, Fresno ranked 92nd of 100 cities, a modest  jump of two spots from 2018, and still yielded the same hand wringing and dismay by parks advocates.

For TPL, the rankings are just an opening salvo to a wider array of work.

Starting in 2015, the City of Fresno, under the Swearengin administration, began to build a working relationship with the Trust for Public Land.

By February 2016, according to emails obtained by The Sun, then-Fresno Mayor Ashley Swearengin huddled with the Trust’s staff at their headquarters in San Francisco’s Financial District for a discussion.

By the end of February, the Swearengin administration submitted a request to TPL to provide “technical assistance” and prepare a feasibility study “to finance land conservation, trails, parks, and a potential related ballot measure.”

With a mandate from Swearengin, the Trust for Public Land went to work on a feasibility study related to Fresno’s parks system.

In a presentation made to city officials, staff at TPL laid out the procedure for their feasibility study. The focus of the study, as displayed in the presentation below, was aimed at electoral paths toward funding park construction and renewal.

However, all the on-going feasibility studies ran into a wall as Fresno began to wrestle with the Master Parks Plan.

By June 2016, the Swearengin administration began the early stages of updating the Parks Master Plan, and decided to solicit outside consultants to help with community outreach.

In emails, TPL staff shared their worry with the Swearengin administration that the bidding for a parks outreach consultant would render their current work moot.

“It sounded like the work we are doing around feasibility research and polling for a potential ballot initiative might be covered in the parks master planning scope and the community engagement RFP that is being worked on,” Creasman said in an email to Bergstrom. “We want to make sure we are not duplicating efforts.”

Ultimately, the $172,000 contract would be awarded to Bertz-Rosa, a public relations and branding firm operated by Suzanne Bertz-Rosa with an interesting twist. Then-City Councilmember Lee Brand joined the liberal wing of the City Council in approving the contract.

The move was highly controversial.

In reviewing the project during the council meeting, Councilmember Steve Brandau probed Celedon, BHC’s local leader, as to whether the group would pledge to stop “a division between north and south Fresno in your outreach.”

Celedon answered back that Building Healthy Communities was not an activist group.

With the contract’s eventual approval, BHC had plastered its infamous ZIP code advertisements, banned by Swearengin on city buses, on billboards across the city advocating for more parks in south Fresno.

Meanwhile, Esmeralda Soria joined Brandau and Clint Olivier and voting against the contract, citing it as a waste of money and a duplication of effort.

By January 2017, the discussion wouldn’t matter. Council member Brand became Mayor Brand and Garry Bredefeld was the new face of northeast Fresno on the City Council.

On a kick to eliminate expensive consultants and lobbyists, Bredefeld joined Soria, Olivier and Brandau to cancel the contract.

Running out the clock

Six months after Swearengin signed a letter of intent to begin feasibility studies of park funding, the Trust for Public Land coughed up its draft of a feasibility study.

The 48-page document laid out the various pathways to funding. It identified five pathways: bonds, parcel taxes, sales and use taxes, a charter amendment to reallocate taxes for parks, and the creation of a special district to enact taxes over particular areas.

In Appendix H, the nonprofit’s team lays out the required amount of voter support for a tax to be enacted via the ballot.

For a city or county to enact a special tax, or a tax used for a specific purpose, TPL’s feasibility study reiterates the need for two-thirds of voter approval, per state law.

As the draft of the feasibility study circulated among city officials, TPL transitioned to its next step in the process of conducting feasibility work: polling.

By mid-September 2016, Team Swearengin and TPL began working to construct a public opinion poll to gather the pulse of the community regarding a potential tax hike for parks.

On the campaign trail to replace Swearengin, Brand and then-Fresno County Supervisor Henry Perea were forced to reckon with water chemistry and the impact of treated water on Fresno’s galvanized piping.

With the city’s policy-making grinding to a halt in campaign season, TPL and Fresno BHC worked to get parks on the campaign agenda, even in a bit role.

On Sept. 27, 2016, the two organizations hosted the “Parks4All Mayoral Forum.” Brand and Perea both attended.

With the city’s parks contractors – Bertz-Rosa, Catalano and BHC – now aboard, they joined Team Swearengin and TPL in editing the feasibility poll in October.

According to emails obtained by The Sun, Team Swearengin was continuing to tweak and provide edits up to and past Election Day on Nov. 8, 2016.

Edits ranged from amending turns-of-phrase to adding in questions in order to evaluate the appetite for parks investment by the city.

One email from Swearengin policy advisor Bergstrom to TPL staff informed that after consulting Swearengin on the battery of questions, there might be a need to test additional issues.

Among Swearengin’s concerns, as relayed by Bergstrom:

“…the other major vulnerability would be that 1) we don’t have enough police officers, so why would we spend money on parks? And 2) something about city hall not having a good track record…tortilla factory, Met Museum, Granite Park, baseball stadium, near bankruptcy – these are all near boondoggles that media and others highlight from time to time.”

The polling itself would be paid for by the Trust for Public Land.

The poll, conducted by Oakland polling firm EMC Research, would go into the field Nov. 15, 2016 – a week after Brand was elected to succeed Swearengin.

The top issue, naturally, was reducing neighborhood crime. Ninety-two percent of respondents identified it as a priority, with 69 percent identifying it as their top priority.

The poll asked respondents their opinions on a 1/8th-cent sales tax in with a 10-year lifespan to fund parks.

50 percent of voters told the pollster that they felt like they had been taxed enough and would vote against a tax hike, with 44 percent saying they would vote for the tax hike, and six percent unsure.

In sum, the poll tested 12 questions related to support of parks and only one question related to opposition.

After hearing the 12 points of positive messaging, respondents said they would support the 1/8th-cent sales tax by a margin of 76 percent to 20 percent.

After hearing the single piece of negative messaging, support for the tax dropped eight points to 68 percent, perilously close to the 66 percent threshold to enact such a tax.

Polling concluded on Nov. 20, 2016 and city officials would get their first look at the figures in the above PowerPoint just before Christmas.

And while Mayor Swearengin administration’s term would end, Team Swearengin’s work on parks was just beginning.