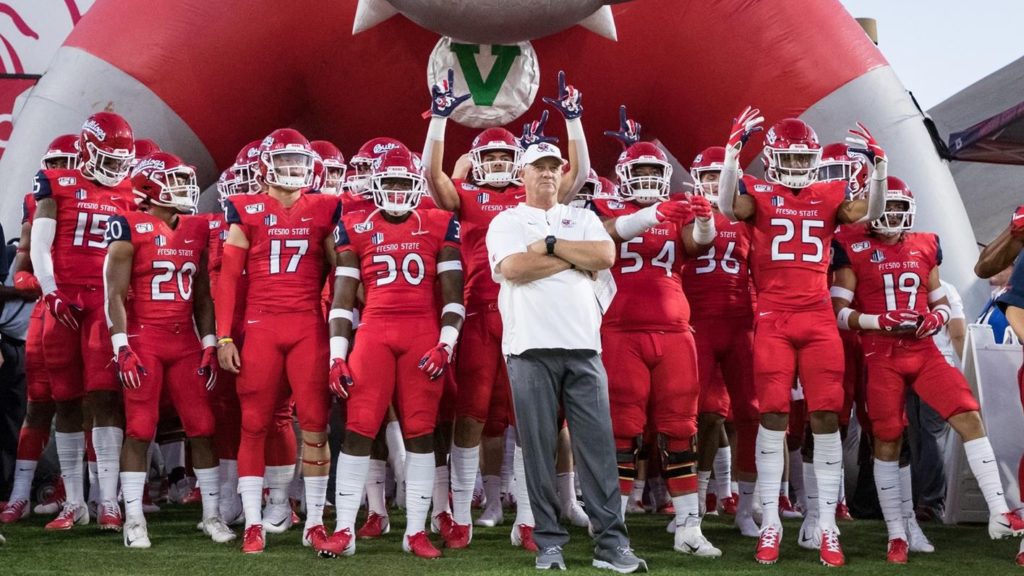 After 10 recruits inked their national letters of intent to Fresno State in December, an additional seven players signed with the Bulldogs as mid-year enrollees and another six will join the team as recruits, totaling 23 new Bulldogs.

“Wrapping up a class is a very exciting time,” said Head Coach Jeff Tedford. “A lot of hard work and energy goes into it. And you can imagine as a coaching transition happens, not only are you hiring a new coaching staff, you’re evaluating your own personnel as well as all the recruits. So we’ve been working really really hard. The staff has done a great job.”

With the class marking Tedford’s first recruits in his second term as the Fresno State head coach, he noted the difference in recruiting from his first stint in 2017.

When he was initially hired at the end of 2016, the Bulldogs were finishing up a 1-11 season after former head coach Tim DeRuyter was fired.

Tedford quickly changed the program’s fortunes, racking up at least 10 wins in each of his first two seasons, which former head coach Kalen DeBoer followed up with a 10 win season of his own last year.

Tedford said it was “a little bit easier” on the recruiting trail being able to show the program’s success over the past 5 years compared to the dismal seasons from before he took over the first time.

Outside of performance on the field, Tedford stressed the importance of finding high quality individuals off the field to fit in at Fresno State.

“Always the goal when you go out to recruit is to make sure you can find not just great football players, but great people,” Tedford said. “Try to find kids that fit our program, fit the Bulldog brand, and we feel like we did that.”

One of the highlights of Wednesday’s class is quarterback Joshua Wood from Graham, Washington.

“He’s a winner. He didn’t lose a game in high school. They were 14-0 and state champions last year. Really brings a great skill-set, not just being able to throw the football, but is very athletic and can do a lot with his legs,” Tedford said.

“Tremendous person, great kid, great team leader, great family – was really a pleasure to get to know him, and we’re very excited about having him in the fold. I think anytime you can get a duel athlete like that with this day in age with how offense is played, with RPO (run-pass option) game and the quarterback run game, is really important. And he brings a great skill-set to our program.”

The following is a breakdown of the new recruits who signed Wednesday and the mid-year enrollees, with comments from Director of Player Personnel Albert Garcia (The players who joined the Bulldogs during the early signing period in December can be viewed here):

Garcia: “Joshua was identified late in his recruitment process but became a high priority for us as soon as our coaches watched his film. He is a proven winner, evidenced by not losing a game his high school career and leading his team to a state championship this past season. He is dynamic with the ball in his hands both as a passer and runner. With his athletic ability, competitive nature, and leadership traits, we believe Joshua has a bright future ahead of him in Bulldog Red.”

Garcia: “Nikko brings an electric element to our offense in addition to the return game. He is a tough runner with great run-after-catch ability and adds versatility to our offense. He was a team captain and four-year starter at his last school, so he brings leadership qualities with him as well. He is a great player, better person, and we are looking forward to seeing him in Bulldog Stadium.”

Garcia: “Welltray is a local product who is also a tremendous athlete. With his frame, jump  ball ability, and physicality, he has all the tools to be a great player on offense. We place an emphasis on recruiting the Valley and we’re excited to see a great local player choose to stay home to play in front of his friends and family.”

Garcia: “Daniel is another athletic offensive lineman with good length and great feet. Since he lined up at both guard and tackle during his time at the College of San Mateo, we look forward to him bringing that versatility to our offensive line room. As a mid-year enrollee, Daniel will have the spring to develop even more to become a force up front.”

Garcia: “Anthony is an athletic offensive lineman with good size and initial quickness off the ball. He provides position versatility as he has the ability to line up inside or at tackle. He is effective both in pass protection and run blocking. On tape you can see that he plays with an edge, which is something we prioritized in this class. As a California junior college product, we are looking forward to Anthony’s contributions on the field in the coming seasons.”

Garcia: “Jacob is  an aggressive defensive tackle that lined up all over the line for a team that went to the state championship. He has a good frame that will continue to develop in our sports performance program. With only playing three games his junior year due to COVID and eight his senior year due to transfer rules, Jacob’s best football is ahead of him. With his initial quickness, length and pass rush ability, ‘Goldie” will be a key contributor in passing situations in the coming years.”

Garcia: “Sione is the prototypical under-the-radar recruit as we identified him during a camp in the summer and continued to evaluate him his senior season. Sione is a defensive end with a great first step and pass rush ability. He is aggressive, explosive and physical. We are excited about Sione’s upside as he just started playing football his freshman year of high school. Sione is a great student and a high character individual who will make an impact both on the field and in the community.”

Garcia: “Johnny is an incredibly disruptive 300-pound defensive tackle with great strength at the point of attack. He does a great job of holding the point and shedding blocks in the run game. With his size, strength, and ability Johnny will be a force in the trenches.”

Garcia: “Raymond has the frame of an inside linebacker but has good quickness and closing speed that allowed him to play safety earlier in his career. He also uses his hands well and has additional value as a situational pass-rusher. We are expecting him to be a big-time linebacker for us.”

Garcia: “Coming from nearby Reedley College out of junior college, Cam was ecstatic when we first reached out about the opportunity to play in the Valley as he was familiar with the culture and the impact of the Red Wave. He is a natural athlete with smooth hips and good ball skills. Cameron has two years of starting experience in this conference and we are excited about his opportunity for him to leverage his experience into early playing time.”

Garcia: “The first thing that comes to mind with Carlton is speed. A state champion in the 4x100m and 4x400m in high school, Carlton utilized that speed to become a freshman All-American prior to Riverside. He is an explosive and twitchy athlete with good ball skills. He is a mature young man with a bright future ahead of him.”

Garcia: “Michael was an extremely productive defensive back this past season as he had 11 interceptions in nine games. He was underrecruited as he did not play his junior year in 2020. He makes plays in all three phases of the game as a defensive back, wide receiver and returner. His great ball skills and speed make us excited about his upside. We look forward to him making plays in Bulldog Stadium”

Garcia: “We are excited to add Nick D’Ambra to the specialist room as he provides experience as a long snapper. He also provides a degree of athleticism at the position as he also played linebacker at the collegiate level. He is another mature young man that has the spring to develop even further as he is a mid-year enrollee.”