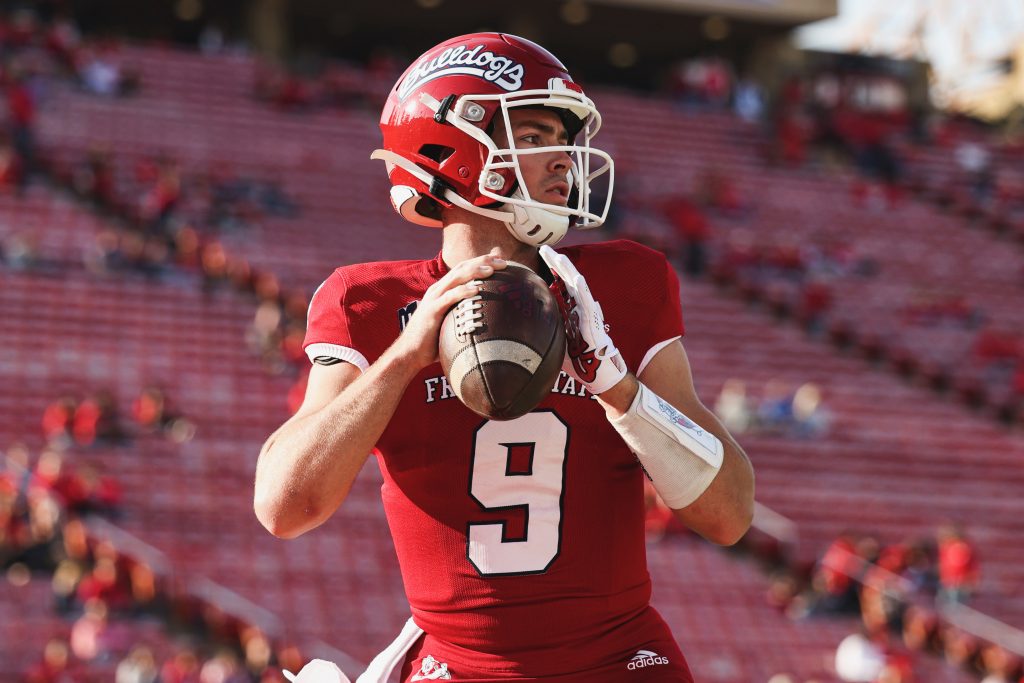 In front of the first sold out crowd in seven years, Fresno State played its worst football all season.

For as much hype heading into this game, a matchup with the nationally-ranked Bulldogs and arguably the weakest Boise State team in 20 years, Fresno State did not belong on the same field as the Broncos.

Fresno State dropped to 7-3 with the 40-14 loss and will certainly drop out of the Associated Press Top 25 as well as the College Football Playoff rankings. The ‘Dogs also lost their command on the West Division as their path to the Mountain West title game was muddled.

After the game, head coach Kalen DeBoer was as graceful as ever in defeat.

“It’s on all of us together,” DeBoer said. “It starts with me, and we’ve got to be better, coach better and get our guys in the right mindset.”

Although the defense gave up more points than any other game this season, the unit made crucial stops throughout the first half and kept the game close.

“I thought we did a good job defensively early on forcing them into field goals, gave us a chance right at the end of the half and even going into the third quarter, nine point game,” DeBoer said.

With the defense coming out strong and not breaking, the ‘Dogs should have been able to put together drives on offense like they have done all season.

But as DeBoer noted, the Bulldogs “just couldn’t get things rolling. We’d make a play, and then at some point in the drive a turnover or a negative play, penalty. It’s just frustrating.”

The Bulldogs failed to set the tone early on, something they’ve struggled with all season. They had a golden opportunity on their first possession of the game to hit paydirt. After failing to convert on third-and-two, DeBoer elected to go for it from the Boise State 25 yard line.

The Bulldogs have been notorious for their slow starts on offense this season, not scoring once on their opening drive of any game. They had their chance Saturday, but Boise State snuffed out a rush by receiver Keric Wheatfall for the fourth down stop.

Boise State took possession and drove downfield to take a 3-0 lead off a field goal.

“Just some missed opportunities there early in the game that we didn’t take advantage of, and all of a sudden kind of the tone goes in a certain direction,” DeBoer said. “Not that they didn’t keep fighting – I didn’t see that, they keep playing.”

Fresno State quarterback Jake Haener threw an interception on the next possession – one of three for the game – and the Broncos responded with a touchdown and never looked back.

“There’s no one more frustrated than him,” DeBoer said.

Despite Haener’s mishaps, DeBoer noted the mistakes from many players throughout the game.

“We need to help each other out,” DeBoer said. “When one guy was making a play, we faltered in other areas and it wasn’t just a quarterback. It just wasn’t receivers. It wasn’t just the O-line. We’ve just got to be better. That’s the beauty of football, when one guy makes a mistake it hurts you. You’ve got to have all 11 guys operating and doing their job.”

Very rarely were all 11 players on either unit doing their job at the same time Saturday.

The Bulldogs struggled with penalties all night, finishing with 11 that dropped them back 91 total yards. On the other hand, Boise State was only flagged four times.

Fresno State was 4-13 on third down attempts, rarely finding a way to stay on the field and give the defense some rest. With the offense’s early failings, Boise State quickly won the time of possession battle, wrapping up the game with a 36:09 to 23:51 advantage.

While the Bulldogs had running back Ronnie Rivers back in full force – he had 12 attempts for 79 yards – DeBoer said running back Jordan Mims was not feeling 100 percent after his two heavy workloads in the last couple of the weeks in place of Rivers.

As the game wore on and the defense tired, the ‘Dogs had no answer for Boise State’s rushing attack. Broncos running back George Holani gashed the ‘Dogs for 119 yards on the ground, gaining 5.6 yards per attempt as Boise State had three second half drives take over four minutes off the clock.

Fresno State only had one such drive all game, the first possession in the 2nd half that ended with a punt at the Boise State 49 yard line.

Fresno State cornerback DaRon Bland intercepted Boise State quarterback Hank Bachmeier in the second quarter at the three yard line and ran it all the way back for a touchdown. But the play was called off for an illegal block in the back, leaving the ‘Dogs with possession of the ball but no points to show for the effort.

Outside of the cheers as Bland weaved his way down the field to the end zone, the sold out Bulldog Stadium crowd didn’t have much to cheer for all night as the Bulldogs put in their poorest performance of the season.

The Bulldogs will try to bounce back next week and stay in contention for the Mountain West title as they host 3-6 New Mexico.