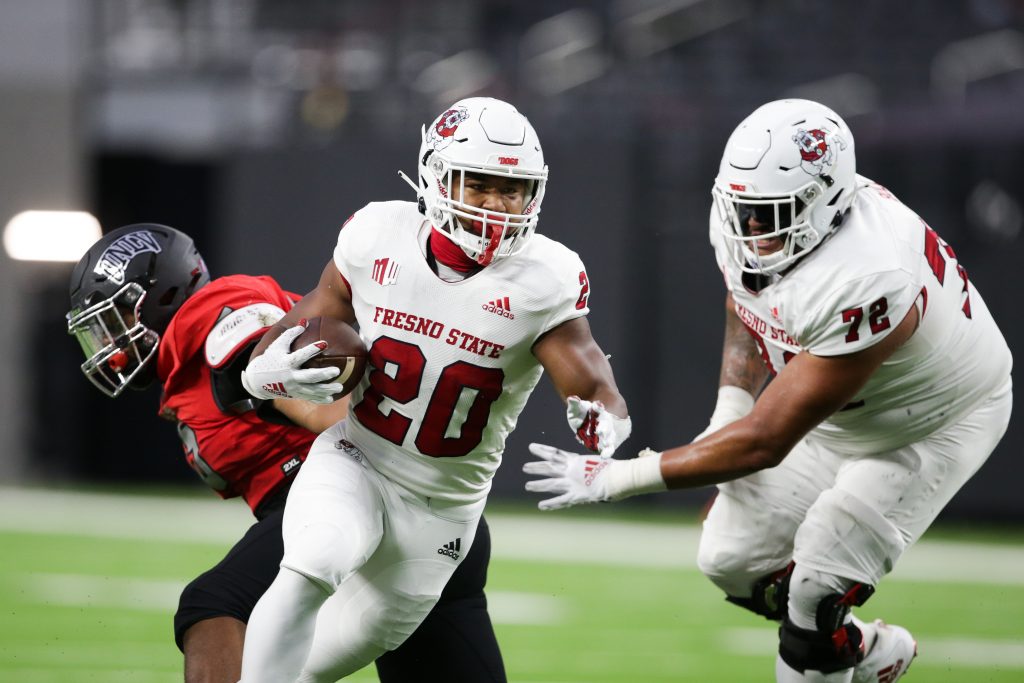 For the second consecutive week, Fresno State relied on Ronnie Rivers to lead the ‘Dogs to victory as they improved to 2-1 on the young, pandemic-afflicted season.

The senior running back was the best player on the field in Fresno State’s 40-27 road-win over UNLV Saturday as he led the Bulldogs in both rushing and receiving. Rivers rushed for 133 yards and 3 touchdowns and grabbed 6 receptions for 99 yards and 1 touchdown.

“It didn’t all happen right away,” DeBoer said. “I think the key was that the game kind of came to him. He always finds ways, and it seems like his shiftiness early on was a key. And he moved the chains at times. He just understands the situation so well, doesn’t panic – a little penetration on some plays, didn’t panic, just trust who he is and understand where the blocks are coming from.”

If you ask Rivers why he was successful, though, it’s all humility from him.

“I would say the guys that I’m playing around, my linemen all the way to my quarterback and the receivers blocking on the outside – I can’t do anything without those guys,” Rivers said. “All the success I had on the field today is because of them, and I couldn’t have asked for anything else.”

With his 4 touchdown performance, Rivers moved into second place all-time in career touchdowns at Fresno State with 43, one shy of the leader, running back Anthony Daigle.

Last week Rivers moved past wide receiver Davante Adams when he scored three times against Hawaii, and he moved past running backs Ryan Mathews and Robbie Rouse on Saturday.

“It’s a very overwhelming feeling knowing that I’m accomplishing these great things,” Rivers said. “Ever since I was little I always told my dad that I wanted to come here and break records. So just being able to do a little bit of that is just amazing.”

While Rivers was unquestionably the best player to take the field at Allegiant Stadium, the rest of the offense had some struggles.

Quarterback Jake Haener jumped out to a nice start on the second drive of the game with a 54-yard touchdown run, but he was not nearly as effective as he was last week, finishing with 164 yards through the air and 1 touchdown.

Backup quarterback Ben Wooldridge came into the game on the ‘Dogs’ first drive of the 2nd quarter – as DeBoer planned – and ended up coming back in late in the 3rd quarter and into the 4th for three more drives.

Wooldridge’s reemergence into the game came after Haener missed on a deep shot down field on Fresno State’s second possession of the second half when the ‘Dogs were facing 3rd and 5, which led to a punt.

DeBoer said the plan coming into the game did not involve bringing Wooldridge out for more than the single drive in the first half, but he thought he had to go with the “hot hand.” Haener finished out the game, and DeBoer said that the starting quarterback spot is not up for grabs. Haener is the man going forward.

“The thing that happened is Ben comes in and moves the ball down the field nicely, just like he did last week, and it is a couple series,” DeBoer said. “So you feel like you want to give the guy who’s got a little bit of a hot hand a chance. But Jake’s certainly a guy that we believe in for sure, and we’ll keep rolling with him.”

Wooldridge was under center for two touchdown drives, but ultimately he struggled more than Haener did, only completing 5-12 passes for 80 yards. Much of the problem for both quarterbacks was the lack of protection the offensive line provided as UNLV picked up 4 sacks.

“What I really just want to see from these guys is better game situation decisions,” DeBoer said. “I think both of them learned some things again today. They’re both heady guys that love the game and are learning. These are their first snaps, really true, meaningful full snaps here playing for the Bulldogs, so there’s things they go through.

“Their No. 1 job’s take care of the football. No. 2 is to move the chains, and if they move them enough they’re going to get us in the end zone. There’s just some times where I thought we could learn from those and talk on the sideline, but in the end Jake played a solid game.”

Fresno State’s defense played an interesting game. The ‘Dogs managed to contain UNLV running back Charles Williams to 89 rushing yards – 27 of which came on the final play of the game – on 27 carries, including 1 touchdown.

The real issue was with preventing UNLV quarterback Max Gilliam from taking off with his feet. Coming into the game, Gilliam only had 4 career rushing yards in 11 games, but he touched the ‘Dogs with 139 rushing yards and 1 touchdown, including a 71-yard touchdown run to tie the game at 27 late in the third quarter.

Although Gilliam statistically profiled as a typical pocket passer, DeBoer said he was not surprised by Gilliam’s running ability.

“It’s honestly not surprising because I knew watching the film – and our defensive staff and our team knew watching Gilliam run around – he creates and he’s a little bit faster than what you think,” DeBoer said. “We had guys with angles, and they maybe didn’t take quite the angle that they thought they needed to and make the play. He converted a lot of first downs with his feet, obviously the big touchdown run in the second half there was critical, kind of a blow to us.

But we’ve got to do a better job. You get focussed on a lot of these other threats and the speed and the dynamic players around him, and if one guys missed an assignment – especially probably more or so upfront where one gap’s not taken care of the way you need to – quarterback takes off and runs and they got a big play. It certainly gives us something we can work on, but I thought we did a pretty good job of hemming up Williams for how many touches he had throughout the course of the game.”

Gilliam was not as effective passing the ball, not even completing half of his attempts – 15-31 – while he threw for 160 yards, 1 touchdown and 2 interceptions to Fresno State cornerback Chris Gaston, who received more playing time as he returned from a hamstring injury.

With Gaston returning to form, Fresno State’s pass defense should only continue to improve – the only costly mistake by the defensive backs came on a 43-yard touchdown pass in the second quarter in which UNLV wide receiver Tyleek Collins just flat out beat safety Evan Williams.

But DeBoer and defensive coordinator William Inge need to figure out how to keep opposing quarterbacks from scrambling for big games. Opposing quarterbacks have rushed for 336 yards in the first three games. That won’t cut it if the ‘Dogs want to contend in the Mountain West.

If they can figure out how to plug that hole – starting next week in a very winnable game on the road against an 0-3 Utah State – a spot in the conference championship game on Dec. 19 won’t be out of the question.