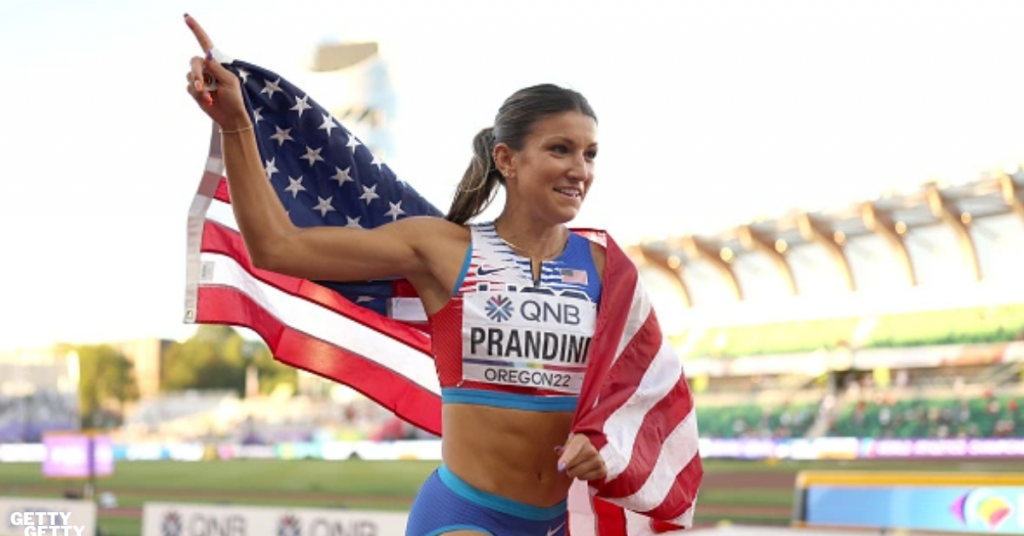 The second-to-last day of the world track and field championships produced surprises in the final two races on the docket, NBC Sports reported.

Jefferson had the best split of the leadoff runners, then Steiner outsplit Thompson-Herah by .24, enough for Prandini and Terry to hold off Fraser-Pryce and Jackson’s charge.

“[If] there’s no chemistry, there’s no trust to be able to move the baton through the exchanges, then you aren’t really going to produce what you think you can produce just because you have the three or four fastest women,” Terry said. “Our chemistry was so good that we didn’t even really have to do much when we warmed up.”

“It means everything to bring the gold back to America,” Clovis native and former Oregon Duck Prandini said during an on-track interview after the race.

Twenty minutes later, Christian Coleman, Noah Lyles, Elijah Hall and Marvin Bracy-Williams delivered silver rather than the expected gold. Canada, which won the men’s 4x100m at the last global championship held in the U.S. at the 1996 Atlanta Olympics, edged the Americans by seven hundredths with Andre De Grasse anchoring.

The U.S. had subpar handoffs from Coleman to Lyles and even more so from Hall to Bracy-Williams on anchor.

The U.S. was without Fred Kerley, who won the individual 100m last Saturday as part of an American medals sweep, then suffered a quad injury in the 200m semifinals.

The U.S. is the greatest sprint nation in history, yet has swept the 4x100m golds at just one global championship (Olympics or worlds) in the last 29 years (22 meets). It is a testament that relays are not won purely by raw speed.

“A lot of people see that [silver] as a defeat, but to be honest with the struggles we’ve been having over the years, it’s just nice to get the stick around, run a fast time,” said Lyles, who was on the 2019 4x100m that earned the U.S. men’s lone gold since 2007.