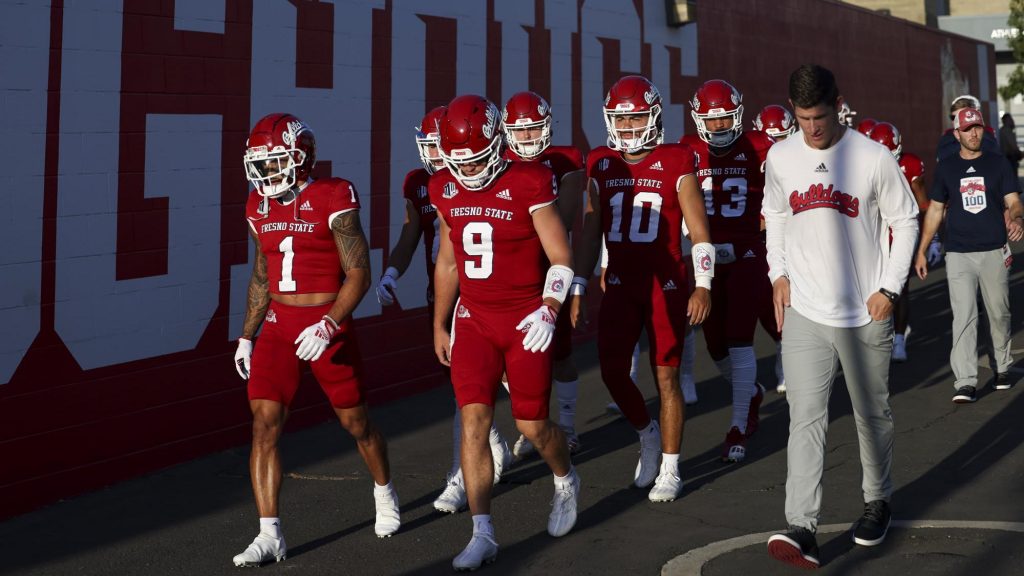 On a day when Marshall went on the road and beat Notre Dame, Appalachian State had another program-defining win against a major opponent, this time against Texas A&M, and Georgia Southern took out Nebraska, Fresno State failed to defend its home turf against Oregon State.

While its peers were pulling off upsets across the nation, Fresno State’s shortcomings on Saturday felt all too similar to an NFL game last season between the Las Vegas Raiders and the Los Angeles Chargers in Week 18.

In that game this past January, the Raiders and Chargers were tied at 32 late in overtime. On 3rd and 4 heading downfield at the Chargers 40-yard line with 39 seconds left in the game, Los Angeles head coach Brandon Staley called a head-scratching timeout to stop the clock.

The kicker: Both teams would have advanced to the playoffs with a tie, and with the Raiders running the ball at that point, it appeared that Las Vegas was throwing a bone to the Chargers.

But Staley called the timeout, and the Raiders responded a couple plays later with a game-winning field goal that kept the Chargers out of the playoffs.

Staley told the media after the game that he called the timeout to get the right personnel on the field to defend against the run.

In Fresno State’s 35-32 loss to Oregon State, it appeared that the ghost of Brandon Staley was haunting the field at Valley Children’s Stadium.

After taking a 32-29 lead with 1:05 left in the game, Fresno State allowed the Beavers to march downfield just two yards away from the end zone with three seconds left.

The Beavers responded by sending their offense back out on the field, leading to another Tedford timeout, and then the offense went out once again, resulting in a game-winning touchdown run for Oregon State.

After the game, Tedford fended off a question inquiring into if he called the timeout to ice Oregon State’s kicker, instead offering up a response in the same vein as Staley.

Monday morning quarterbacking is always an easier profession than being a head coach, but if Oregon State had been allowed to kick the field goal, the Bulldogs would have had an opportunity to win the game in overtime.

Regardless of the timeout, Fresno State should never have even been in such a poor position to begin with – a common theme in many of the program’s big games over the past 25 years.

Kicker Abraham Montano was 4-6 on his field goal attempts – from 34 yards and 52 yards – and also missed an extra point attempt on Fresno State’s final touchdown, which gave the Beavers the opportunity to play for the tie at the end if they had chosen to do so.

More importantly, though, the defense faltered in the game’s final minute, not looking like it had for the previous 59 minutes.

Oregon State quarterback Chance Nolan went 14 for 27 with 219 yards and 1 touchdown as Fresno State’s defense made things difficult on him all night.

But in the final minute, Nolan threw for 69 of those yards against Fresno State’s soft coverage, and the Bulldogs also committed a pass interference penalty which put the Beavers on the three-yard line.

Despite the late defensive breakdown, Fresno State’s missed opportunities on offense tell the story of the game.

The Bulldogs had six trips to the red zone but only came away with 22 points. On the other hand, the Beavers scored 28 points on only four trips.

Fresno State quarterback Jake Haener played well against what was probably the best secondary he will face all season, going 30 for 46 with 360 passing yards. He only threw for 1 touchdown, however, as he and the offense struggled to find the end zone after driving downfield.

Running back Jordan Mims put together an excellent night – 122 rushing yards and 2 touchdowns on the ground – and wide receiver Nikko Remigio grabbed 100 yards through the air and was a much-needed weapon on special teams, averaging 29 yards per kick return and returning one punt for 27 yards.

Not all the ticket holders actually attended the game – as evidenced by the not-so-full red seats – but the university had a legitimate opportunity to pitch itself to the community at-large in front of a great crowd.

Instead, it is two years in a row that the ‘Dogs failed to win in front of a sold out crowd.

Before last year’s loss to Boise State, Fresno State had not had a sellout crowd since 2014.

Saturday was the first sellout under Tedford, the popular coach that the fanbase begged to bring back for a fourth season after a two-year sabbatical to replace Kalen DeBoer, who departed for Washington.

Barring a miraculous upset on the road against USC next week, Fresno State – which is hoping for voters to pass Measure E to provide funds for stadium renovations and academic facilities – will not have an opportunity like this the rest of the season.