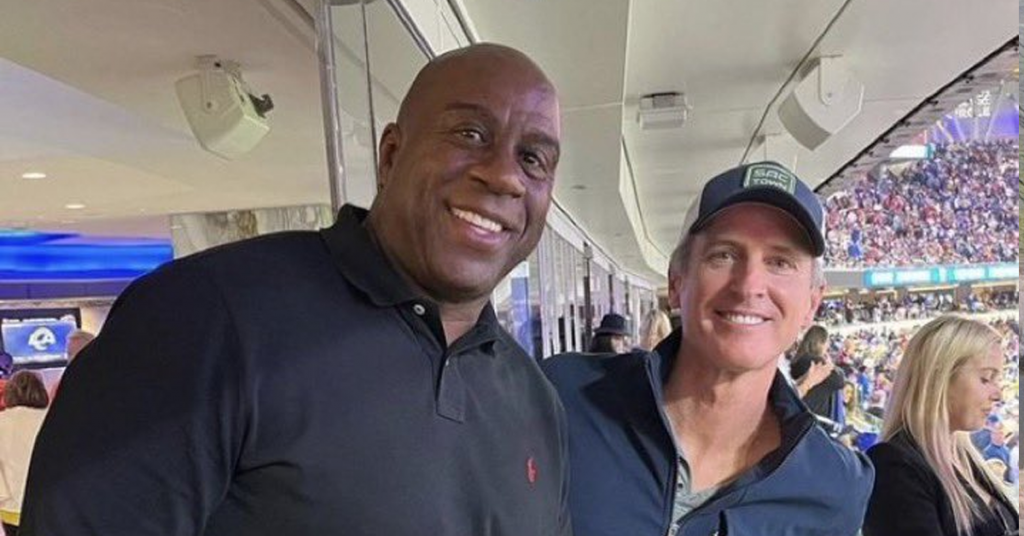 Gov. Gavin Newsom was among a star-studded roster to attend Sunday’s all-California NFC Championship between his hometown San Francisco 49ers and the Los Angeles Rams.

Following the Rams’ come-from-behind victory to punch a ticket to the LA-bound Super Bowl, California’s Governor was on the receiving end of a litany of comments over attending the game maskless.

If @GavinNewsom can attend an indoor mega-event MASKLESS with tens of thousands of other maskless fans, then so can our kids at school, especially when playing at recess! #NoMore #UNMASKOURCHILDREN pic.twitter.com/XqmtCxSrzK

@GavinNewsom did you enjoy #SFvsLAR tonight at @SoFiStadium? Love your gorgeous maskless face! Unmask my children now please. My toddler, 5yr old, and 7 yr old are going to school in LA County tomorrow and will be sent home if they unmask like this, even outside. pic.twitter.com/ChUgV3yZTK

Gavin Newsom unmasked in a packed stadium while the state of CA still has emergency orders in place for Covid-19. pic.twitter.com/PUAZoYoql3

Toddlers are being forced to wear masks all day long in school. Maybe one day they’ll be governor or the mayor of LA and they won’t have the follow the rules they impose on others. pic.twitter.com/YGJDZeBxGA

The problem with playing #covid19 mask-shaming police online is that everyone is an offender at some point. pic.twitter.com/9avT0MHp7q

There’s a statewide indoor mask mandate per a state of emergency — are celebrities and politicians exempted from this? Is there science indicating that if you have high name-ID you have immunity from the omicron variant? pic.twitter.com/nHXWgUpLTT

I have no issue with no mask here. But I just feel like kids in LA shouldn’t be wearing them on the playground if adults don’t have to. pic.twitter.com/o5pELu6Z2I

California’s extended indoor mask mandate has already affected Super Bow LVI, with the NFL requiring attendees to wear KN95 masks during the game. It is set to expire on Feb. 15.

At a press conference Monday, Newsom claimed that he only took off his mask to have a “glass of water” and take a photo with former professional basketball player Magic Johnson.

“I was very judicious yesterday. Very judicious. And you’ll see in the photo that I did take, where Magic was kind enough, generous enough to ask me for a photograph, and in my left hand’s my mask and I took a photo. The rest of the time I wore it, as we all should. Not when I had a glass of water and I encourage everybody else to do so.”

But he appeared to be maskless at other points during Sunday’s NFC championship, including in an image captured by the Rams “fan cam,” which showed the governor sitting down with his mask dangling from one ear.

Fox News contributed to this report.