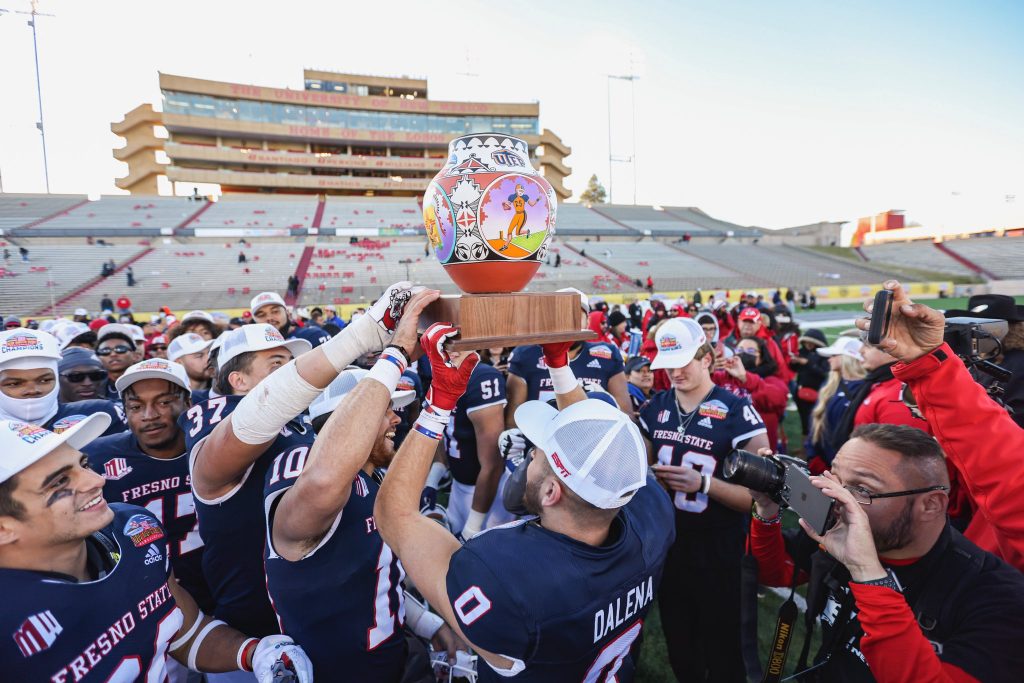 Despite a crazy few weeks since the regular season ended, Fresno State was unaffected by all the noise as the Bulldogs claimed victory in the New Mexico Bowl on Saturday.

Under the leadership of interim head coach Lee Marks – his first career game as a head coach – the Bulldogs beat UTEP 31-24 to pick up their 10th win of the season, marking the 10th time in program history that a Fresno State team posted double digits in the win column.

“For any program, getting 10 wins, it’s a big deal. It hasn’t happened a whole lot in our program, to be honest with you, but it happened today. That’s huge for our program moving forward. It’s about our brand and making sure these kids remember this for the rest of their lives,” Marks said after the game.

“Now they go down in history as one of the best teams in Fresno State history. As we always say, you write it in your book, and this is just a chapter ending the season the right way. We can honestly say we finished, so that’s big-time.”

After former head coach Kalen DeBoer departed for Washington a few days after Thanksgiving, quarterback Jake Haener entered the transfer portal and appeared to be on his way out as well.

But Haener pulled back and rejoined the program less than two weeks before the bowl game, leading to uncertainty as to whether or not he would play against UTEP.

Marks did not bring any clarity to the situation during his pregame press conferences, instead choosing to play his cards close to the vest.

But Haener took the field for Fresno State’s first drive of the game and put up a performance rather typical to what he has done this season, finishing with 286 yards and 1 touchdown on a 63 percent completion rate.

While Haener was solid throughout and showed promise under interim offensive coordinator Kirby Moore – who reportedly is set to move into the position full time under incoming head coach Kalen DeBoer – the story of the game was running back Jordan Mims.

Running back Ronnie Rivers did not play Saturday, leaving the bulk of the ground game up to Mims.

Once again, just as he has in similar spots throughout the year, Mims did not disappoint.

“With Ronnie not being able to play today, we knew we’re able to rely on Jordan. To be honest, he’s such a good player. He’s so one-cut, get vertical, downhill,” Marks said.

“And he told me, ‘Coach, I’m not going to get tired.’ And he did not. That’s tremendous for him and his family. His family was here watching him play, and for him to be MVP of this bowl game, it’s big time. We have a lot of trust in Mims.”

On the other side of the ball, safety Elijah Gates grabbed an interception on Fresno State’s own three yard line early in the second quarter, preventing a UTEP touchdown and helping earn him Defensive MVP honors.

About one hour after the game ended, Washington announced that a large part of Fresno State’s coaching staff is following DeBoer and offensive coordinator Ryan Grubb.

Marks will not return to Fresno State after filling in as interim head coach following the last two seasons as running backs coach.

Washington announced that Marks will be the Huskies’ running backs coach while he was at the podium for the post game press conference.

Marks declined to comment on his move to Washington.

Safeties coach Chuck Morrell will join Inge as co-defensive coordinator and will also coach the safeties at Washington.