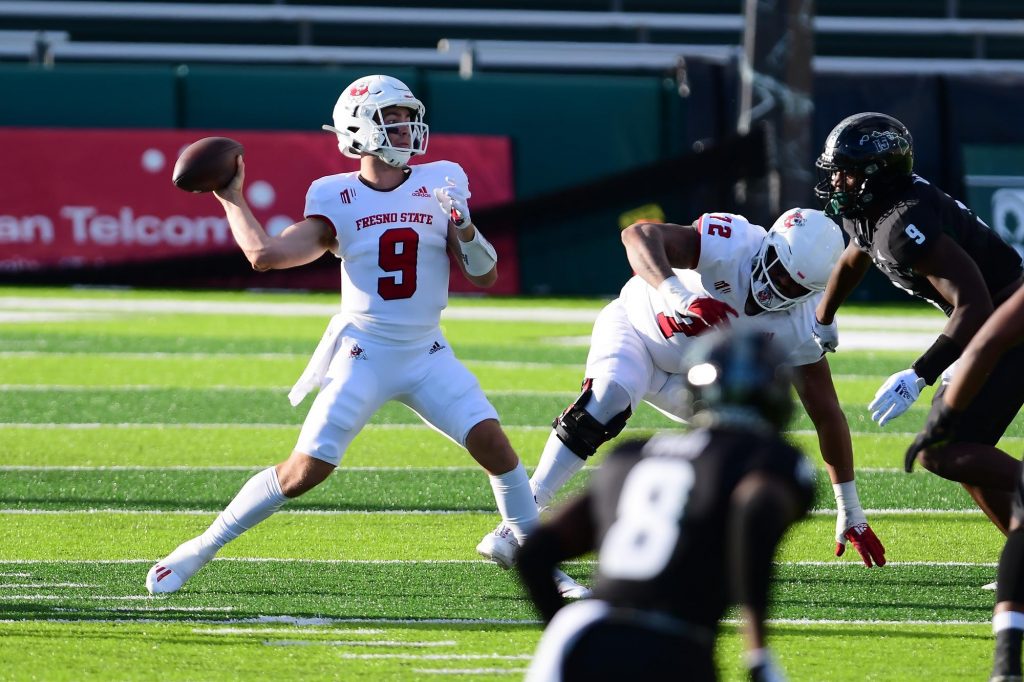 With three and a half minutes remaining, Fresno State needed another fourth quarter comeback at the hands of quarterback Jake Haener to defeat Hawaii on Saturday.

Haener and the Bulldogs nearly did it.

They drove 64 yards on 13 plays to get within 11 yards of the end zone. They only needed a field goal to force overtime.

But instead of repeating the heroics from earlier in the season, Haener just missed wide receiver Ty Jones on a crossing route in the middle of the field.

Jones reached for Haener’s slightly off target pass, but the ball bounced off his extended arms and fell into the hands of Rainbow Warriors defensive back Hugh Nelson to seal the 27-24 loss for Fresno State in the final seconds.

That drive summed up Haener’s performance – brilliant at times with a gritty performance to overcome several big hits and an ankle injury, but overall just an off night.

Haener threw for 388 yards and 3 touchdowns but also had 5 turnovers – 4 interceptions and 1 fumble – which proved to be far too much to overcome. He completed 56 percent of his passes (28-50), coming in far less accurate than his 73 percent clip heading into the game.

“We’ll watch the film, and Jake is always going to be the most critical in the end, whether it was his fault or not,” said Fresno State Head Coach Kalen DeBoer after the game.

“He’ll say it goes on him, and we’ve got to be better. We’ve just got to be sharper and crisper, especially down in the red zone. Not just in that drive, but the other ones. We didn’t just lose on that one play. We lost as a team on a lot of plays throughout the course of the game.”

Fresno State’s turnover woes started on the first drive of the game. After a 37-yard kick return by Jordan Mims to give the Bulldogs the ball on their own 40, Haener hit running back Ronnie Rivers for a 21 yard completion to move into Hawaii territory.

Hawaii took a 7-0 lead on the ensuing possession, and after the Bulldogs stalled on their second drive, Hawaii hit a field goal to go up 10-0 midway through the first quarter.

From that point on, however, it was all Fresno State until the fourth quarter. Wide receiver Zane Pope caught 2 touchdowns, Cropper snagged one of his own, and a field goal made it 24 straight points for the ‘Dogs.

But Hawaii dominated the fourth quarter, scoring 17 straight points to take the lead and send the ‘Dogs packing.

Hawaii’s success largely came on the ground as Fresno State had no answer for Rainbow Warriors running back Dae Dae Hunter, who totaled 127 yards on 21 carries. Fresno State got gashed for 232 yards total on the ground.

Hawaii’s strong running game came as quarterback Chevan Cordeiro – the starter this season – was scratched shortly before kickoff due to a lingering injury. That forced true freshman Brayden Schager to take the field.

While Schager struggled for much of the night – 11-27 for 116 yards – he did hit his receivers for 2 touchdowns and did not have any turnovers.

With the loss, Fresno State can say goodbye to its No. 18 ranking in the Associated Press Poll, as well as the Heisman Trophy hype that surrounded Haener since the Bulldogs beat UCLA a couple weeks ago.

The Bulldogs dropped to 4-2 and have their first bye week before they hit the road once again to face Wyoming (4-0).

“You’ve got a locker room that’s hurting,” DeBoer said. “We’ve got to learn, and we’ve got to realize that every yard matters, and you’ve got to be stingier, smarter – can’t give the opponent opportunities to hang in the game. We’ve got to do our job.”