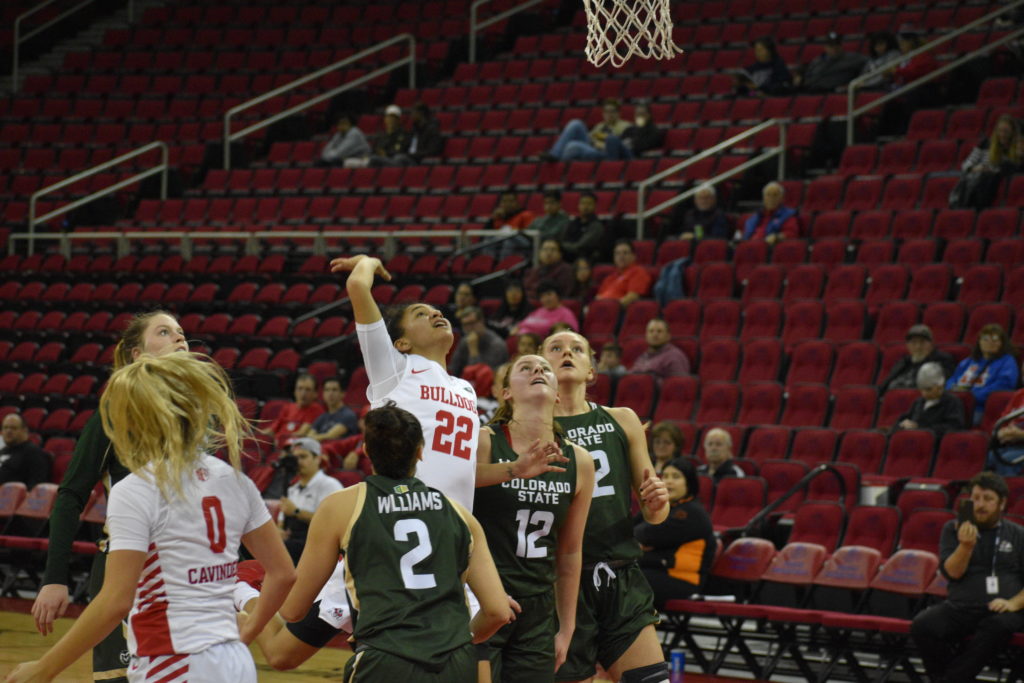 In a thrilling defensive battle, the Fresno State women’s basketball team took it down to the wire with Colorado State, winning 55-53 off a buzzer beater from junior guard Aly Gamez.

“Wow, it’s been a long journey this season battling through injuries, fighting through some things, but you don’t ever stop,” Gamez said. “That’s what I’ve learned about myself – just keep going, keep pushing no matter what, and for that shot to go in, it just means a lot.”

Fresno State led through the fourth quarter up until Colorado State guard Jamie Bonnarens hit a corner three to tie the game with only four seconds remaining.

Bulldogs’ head coach Jaime White called a timeout which gave them half a minute to set up a shot to win the game. Gamez got the ball and drove to the basket to make the game-winning layup.

“Unfortunate that kid hit that three at the end, that was a nice shot for her,” White said. “But really gutsy play by Aly to take the drive and then finish that shot with four seconds. Four seconds is a lot of time.”

The Rams brought the Mountain West’s top ranked defense into the Save Mart Center and caused the Bulldogs problems all night.

White said Colorado State presented one of the toughest half-court defenses the Bulldogs have faced all season.

Fresno State struggled getting in rhythm on offense, especially at the start of the game. The ‘Dogs didn’t score until five and a half minutes into the game when freshman forward Kendyll Kizner hit a three to get them going.

Kizner was Fresno State’s best shooter, coming off the bench and making four of seven shots, including three of five three-point attempts. Kizner finished with 11 points, a career high.

“Kendyll’s really long and helps us with her length,” White said. “She can play multiple positions, so she’s able to play inside and outside, and you can see that she’s a great shooter. And if you give her a second, she’s going to knock it down. We needed that tonight, and that’s what good teams do, is people come off the bench and give you a boost.”

Gamez also finished with 11 points and was especially effective in the paint. She helped the ‘Dogs to a 32-24 advantage in the paint over the Rams.

Junior forward and current Mountain West Player of the Week Maddi Utti was once again consistent on both ends of the court. She led the Bulldogs with 12 points and 13 rebounds and played in all 40 minutes.

Although the ‘Dogs only made 34.3 percent of their shots, Utti and junior forward Wytalla Motta combined for 8 offensive rebounds, which helped the Bulldogs to 11 second chance points.

Freshmen guards and twin sisters Haley and Hanna Cavinder struggled against the Rams’ defense, making a combined four of 25 shots, but they each added 4 assists as their passing helped space the floor to set up Utti, Kinzer and Gamez.

Fresno State remains undefeated in Mountain West action (8-0) and improves to 15-4. The Bulldogs go on the road on Saturday to face 14-6 Boise State in a matchup of arguably the two best teams in the conference.

“We need to go there, we need to be ready, we need to play hard and play to win and give ourselves a chance and see what happens,” White said. “So I don’t feel the pressure at all. I feel like actually the pressure is probably more on them being a home game, them being preseason picked [No. 1], and I think they’re going to struggle. They haven’t seen this team, and we’re going to have to put our best game forth and just see what happens.”