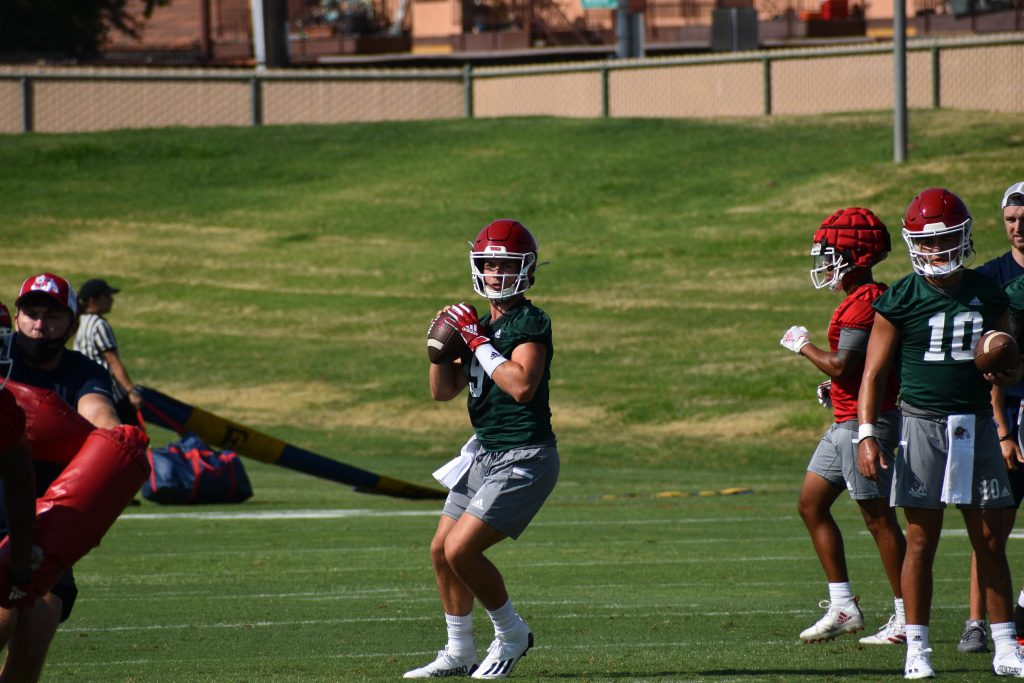 Last season served as a bit of a test run for Bulldogs quarterback Jake Haener.

While Fresno State went 3-3 in the pandemic-shortened season and had to deal with players sitting out due to COVID-19 and contact tracing, Haener served as a constant for the ‘Dogs, firmly cementing himself in the competition to be the next great Fresno State QB that fans talk about for years to come.

“Last year was very crazy, but I think it’s kind of a blessing in disguise for me never being a starter before and being able to kind of just get a test run, basically, just get six games under my belt,” Haener said. “It’s huge for me and my confidence, just being able to come back and be the established starter.”

The highly anticipated season opener in 2020 proved to be a dud for Haener, who was a high-profile transfer from Washington a year prior.

In that first game against Hawaii – Haener’s first collegiate start – he only managed to complete 54.8 percent of his passes and was picked off three times.

He moved past that quickly, only throwing two more interceptions in the remaining five games and never again posting a completion percentage under 60.

Haener finished the season ranked fourth in the nation with an average of 336.8 passing yards per game. The last Bulldogs QB to rank that high was Derek Carr, when he led the nation in many of the major passing stats in 2013.

Even though Haener put up numbers not seen at Bulldog Stadium since Carr, he’s not touting his greatness, instead preferring to let his play on the field do the talking.

“Bottom line we were 3-3 and we lost the last two games,” Haener said. “Put up all the numbers you want to, but if you’re not putting wins in that column it doesn’t really matter what you put up. But it was nice to be able to have some confidence and be able to come back this year and learn and take what I did and grow from it. I’m excited with the weapons we have this year going into it, and we’re going to do some good things.”

That growth has been “night and day,” according to Offensive Coordinator Ryan Grubb.

Just a few practices into fall camp, Haener impressed Grubb with a touchdown pass on what the offensive coordinator calls an “alert throw” – an option that digresses from the normal progressions and reads a quarterback goes through during a play, depending on the coverage that the defense is presenting.

“Throwing the alert happens very few times. You normally get in your progression, make your read, make the throw, move along. And he saw it and did not flinch at all and drilled it for a touchdown” Grubb said.

“It would’ve taken him three to four reps of walkthrough to get that last year.”

Grubb noted Haener’s improvement in conditioning drills with the other quarterbacks, getting the group exhausted before having them line up and verbalize all their progressions.

“His mastery of the offense right now compared to last year is obvious, and it should be. He’s stepping into his second year, and he’s really coming along. The progressions are there. He’s really 2.0 now,” Grubb said. “He’s able to really focus on defenses and things like that and look at coverages and leverage instead of just trying to remember ‘where does this guy line up,’ and things like that.”

Version 2.0 also includes a bulked-up Haener, one that’s more prepared than last year to take a big hit and bounce right back.

The most challenging aspect of starting every game last year was playing at 185 pounds, Haner said. Coming into this season, he put on 10 to 15 pounds while getting leaner.

“That was a big thing that I tried to do, and it was good that I did,” Haener said. “I dialed in my diet and met with a lot of people to try to do the smartest thing with it and get to where I want to get to.”

As the quarterback and one of the team captains, Haener needs to be consistent day in and day out, Grubb said.

That consistency will go a long way toward propelling the Bulldogs to the top of the Mountain West.

“Having an inconsistent quarterback could just take the breath right out of you as a football program. He’s got to be the same guy every day, from how he prepares, how he finishes practices, all those things,” Grubb said.

“The other part is just his ability to be productive and score points and lead the football team and be a positive attitude guy every day. He’s done all those things. He really, compared to last year, doesn’t give into frustration nearly as quick. You could put him in some really challenging situations, and he doesn’t give in nearly as much. He’s a pretty resilient kid.”